In Star Trek, what's the rank progression from cadet to captain?

But how do cadets make the big chair - what's the career progression that students take?

Take Kirk - he seems to end up in the captain's chair almost by accident rather than following a structured path.

While there are plenty of exceptions in the Star Trek universe, due to exceptional valor or need in dire circumstances, typically a cadet needs to graduate from the Academy before he or she can hold a rank. (During time in the Academy, a cadet may be posted to a starship for training purposes, such as Spock's training ship in The Wrath of Khan, but he or she has no rank — simply cadet.)

One he or she does graduate, the typical progression for a command-stream cadet (gold shirts in TOS, red shirts in TNG) as seen through characters' lives in the various Star Trek television series and films is:

In TNG-style rank pips, these are: 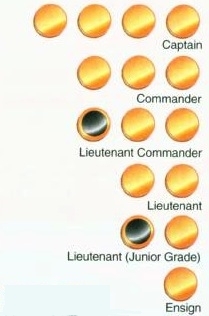 How quickly one can go through these ranks, or even whether they can attain them, is determined by a combination of performance, merit, individual circumstances, and the nature of the missions served.

A couple of potentially confusing points to keep in mind:

Regarding both the career journey of cadets and the very last point above, Nog and O'Brien exchange relevant remarks in DS9 "Behind the Lines":

O'BRIEN: That's Captain. It's an old naval tradition. Whoever's in command of a ship, regardless of rank, is referred to as Captain.

NOG: You mean if I had to take command, I would be called Captain too?

O'BRIEN: Cadet, by the time you took command, there'd be nobody left to call you anything.

You have to be in the Command division to work your way to the big chair.

Unless you are commanding a science vessel (like alternate future Crusher) you aren't going to captain a ship wearing anything but Gold (TOS) or Red (TNG). People can move from divisions, as we see on occasion (Worf started in Command, moved to Operations, then was moved back to Command when he transferred to DS9). This doesn't mean Crusher can never achieve the rank of Captain, but she would be a Captain in science, probably serving at a medical facility, and not as a captain of a star ship.

In the Prime Universe, Kirk has a regular progression for being promoted, although somewhat rapidly. His whole history isn't known, however:

In TNG you could look at La Forge:

Titles can be a little ambiguous though. If you are in command of a star ship, you are called the Captain, regardless of your actual rank. That is the same on Navy vessels, where you might be a Lieutenant Junior Grade in charge of a tug boat, but if there is another crew member, he will refer to you as captain.

How to be promoted:

People who excel at their jobs are often rewarded with promotions. In contrast you can look at the alternate time-line with Picard, where he never achieved more than the rank of Lieutenant Junior Grade as a science officer. This was because he was viewed as an officer who always played it safe, and never took risks that would get him noticed.

The other factor that can lead to rapid promotion is a war. If you have a lot of personnel being killed and a shortage of officers, you are going to need to promote people to fill key leadership positions.

In contrast, if you served aboard the NX-01, you never saw a promotion.

26
How long does it take for someone to get promoted in Starfleet?
7
Star Trek movie characters' ranks

18
Was Kirk reduced in rank to Captain for Star Trek the motion picture or was he addressed as Captain as head of the ship?
25
Are the Star Trek Next Generation rank pips based on anything from real life?
43
Why does Tom Paris get Starfleet rank, but the Maquis get provisional rank?
27
Can Starfleet doctors make Captain rank?
19
How effective is the Kobayashi Maru as a training exercise when everyone knows it is an unbeatable scenario?
37
Beverly Crusher's rank aboard The Enterprise
50
Which Star Trek character appeared on screen with the most different ranks?
10
What universities provide a path to a Starfleet commission?