I am looking for a novel that I'd love to re-read it with my wife (my 13-year old self must be proud of me I guess).

The plot was about humanity finding an alien station on an orbit of Earth. (I'm not sure if it wasn't Moon itself).

On this station there were thousands of ships ready to travel so there rose a company that paid people to get on those ships and explore the galaxy.

The problem was humans didn't understand how to steer those ships so they had to rely on preset targets. Of course there was no telling where particular ship was to go and fair amount of them never returned.

Chronology and other relevant information

I read it as an early teenager back in early 2000s. It was Polish translation of a foreign (possibly English) story.

I think (not sure) that the book wasn't new at the time. It was just one of those books you dig out in a library and take to see if it's good. I don't recall cover either and even if I did it'd be of the Polish version.

Additional information could be that the narration was led along the psychoanalytics of the main protagonists where he relives his memories from inside the station and his journeys.

This is Gateway (1977) by Frederic Pohl, the first novel in the Heechee saga.

Gateway is a space station built into a hollow asteroid constructed by the Heechee, a long-vanished alien race. Humans have had limited success understanding Heechee technology found there and elsewhere in the solar system. The Gateway Corporation administers the asteroid on behalf of the governments of the United States, the Soviet Union, New People's Asia, the Venusian Confederation, and the United States of Brazil.

There are nearly a thousand small, abandoned starships at Gateway. By extremely dangerous trial and error, humans learn how to operate the ships. The controls for selecting a destination have been identified, but nobody knows where a particular setting will take the ship or how long the trip will last; starvation is a danger. Attempts at reverse engineering to find out how they work have ended only in disaster, as has changing the settings in mid-flight. Most settings lead to useless or lethal places. A few, however, result in the discovery of Heechee artifacts and habitable planets, making the passengers (and the Gateway Corporation) wealthy. The vessels come in three standard sizes, which can hold a maximum of one, three, or five people, filled with equipment and hopefully enough food for the trip. Some "threes" and many "fives" are armored. Each ship includes a lander to visit a planet or other object if one is found. 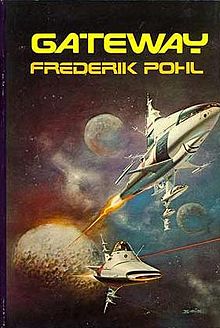 The protagonist is Robinette Broadhead

Robinette Stetley Broadhead—known as Robin, Rob, Robbie, or Bob, depending on circumstances and his state of mind—is a young food shale miner on Earth who wins a lottery, giving him just enough money to purchase a one-way ticket to Gateway......

Broadhead returns to Gateway and receives the entire bonus. He feels enormous survivor guilt for leaving his crewmates, especially Klara, and is unsure whether he intended to sacrifice himself or the others, so once back on Earth as a wealthy man he seeks therapy from an artificial intelligence Freudian therapist program which he names Sigfrid von Shrink.

16
Short story: man watches girlfriend's spaceship entering a 'black hole' (?) forever
19
Story about aliens nicknamed 'Eechees' who have created a network of tunnels on Mars
27
Book from the late 1980's about an abandoned space station
6
Story about a black hole and a robot therapist
6
Looking for a two or three part sci-fi book with an alien space station and ships that scavenge alien artifacts
7
Hangar of alien ships with pre-programmed destinations discovered on the Moon
4
Novel about a guy who travels through portals to bring back alien technology (jaunt?)
3
Remnants of an alien civilisation, vessels with pre-programmed destinations
3
Which book involves risky alien spaceship autopilot exploration?
4
Lottery winner has brain uploaded, then travels in a starship
See more linked questions