I have a portrait in the classroom and a bust in the library. Who am I?

I would like to find out the identity of a certain horse who I believe we see only in works of art within the My Little Pony: Friendship is Magic series. This horse has a framed portrait in the Ponyville school classroom wall right next to Princess Celestia's portrait, as seen in S1 E12 (see image below) and S2 E17. He or she also has a wooden bust on a table in the Golden Oak Library, as seen in at S1 E7 and S2 E20 (see image below). Who is this horse? 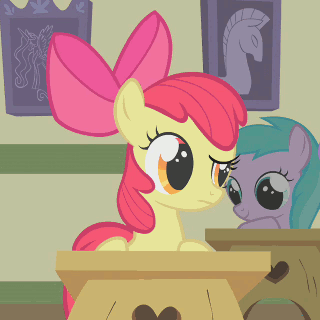 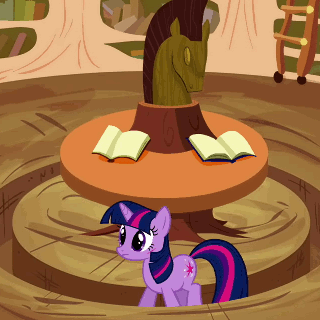 (Follow the above images for higher resolution. I don't provide full resolution screencaps this time, sorry.)

Sadly, I would argue that as far as the current clues go, there is no evidence that the "Decorative Horse Head" statues/paintings are meant to represent a specific character at all, or at least one the show creators have given a specific identity to, so all I can provide are some considerations on the issue.

First of all, let's just consider an Out-Of-Universe approach. As Kutulu correctly stated, the visual representation of the horse seem to be of Hellenic nature, closely resembling the stile often found in ancient Greece art. That said I don't know it the sculpture is meant to be a direct reference to the Trojan horse...

After all, why should the ponies even know what a Trojan ---cake--- horse is?? Notice that this same trick is used twice in the series, both in a regular episode and in the 2017 animated movie 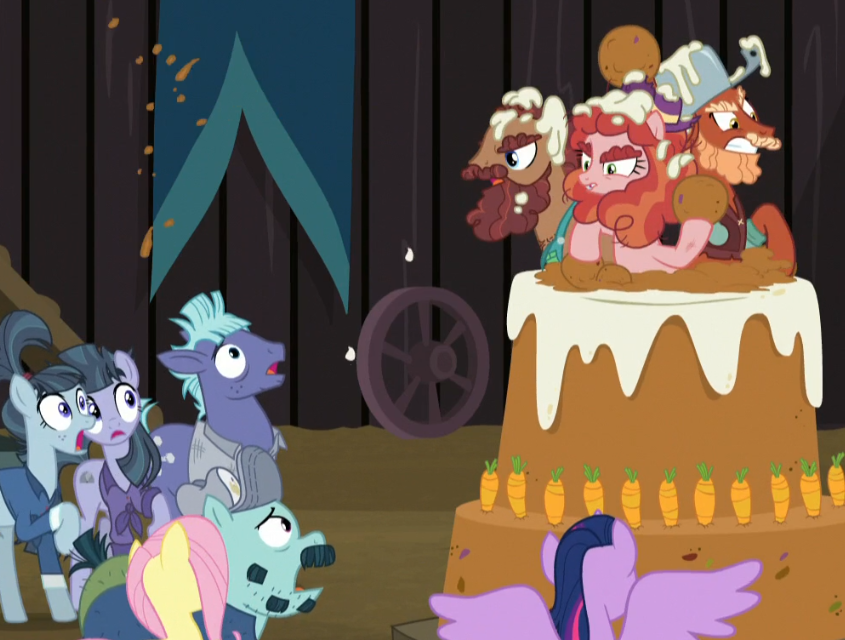 Jokes aside, this is somehow coherent with the rest of the source material - many artistic/visual element seem to draw inspiration from either Ancient Rome or Greece cultures. Just think of the royal guards armors or to a very specific vase Spike showed us in S06E01: 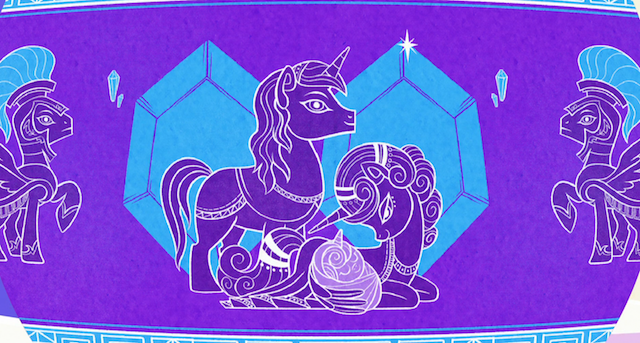 But this is as far as it goes: while it is clear that there is an artistic influence, claiming that the "character" is the same would be a tad too much.

As far as an In-Universe answer goes, things get a little more confuse and I currently think that even if the character may be intended to be the same, it has never been given a name or a backstory.

First of all, let's start with an assumption: there isn't just one kind of "Generic Horse Sculpture". Instead, I was able to notice at least two different ones:

The first is an Unicorn (picture from the very first episode, this is Twily in her original house): 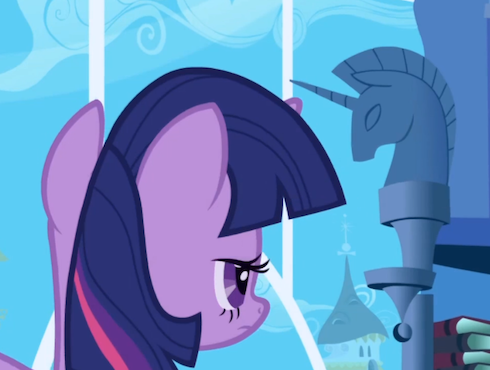 The other one has no horn, so it may be a Earth pony or a Pegasi: 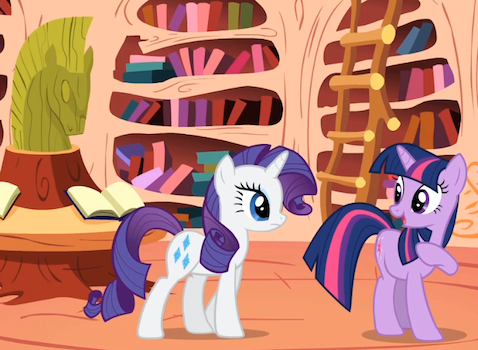 Please notice that while the two representations aren't just the same one with an added horn (ear shape is different too, for example) they both share the same design. Also notice that both "shapes" are used pretty freely int the media, so it is pretty common to see them in painting form, as a decoration on some Canterlot building.... or even at the top of a skyscraper in Manehattan.

But who are these mysterious figures? Do they have an identity? Sadly, there is no indication in any media I can remember that may give an official answer. The Journal of the Two Sister doesn't mention anything noteworthy and so does the Art of Equestria guidebook.

There is only one real clue:

Yep, the horned version of the statue matches the old flag of the Unicorn tribe, from the pre-Equestria age. Oddly enough, the old Earth ponies flag is the only one that does not even contain the shape of a pony in the first place, so the horn-less statue is still without a source.

I am going to argue that the only claim one can make based on what we know so far is that the unicorn is either a remain from the old times that is still in use as a decoration motif in Canterlot or even an "Unicorn Tribe" symbol they still use in the present times. Either case we don't know if it was just a generic "ideal unicorn" pony figure with no real identity or if it was modeled after some famous character (Not good ol' Starswirl, the statue has no beard :P Maybe princess Platinum father - who is directly referenced in the Journal? Possible but not likely imho). In the same way, we don't know if the Earth pony version was an original figure in the first place or just something modeled after the Unicorn one - after all, why couldn't some Earth Pony artisan in the past decide that he liked that statue and proceded to make an Earth pony version? It may have been something the unicorn made as well, as a sign of friendship to the Earth ponies (maybe after the tribes united they started to do commerce with each other and the art styles mixed together?).

As a final side-note, since the first animated movie has been available for a while now, it is worth noticing that the original plot of said move revolved around a character called Cosmo (later re-adapted in what became Tempest) - he was supposed to be Celestia and Luna brother. This - added to the never built upon details from the main show about Flurry Heart being the first natural born alicorn in Equestria - may indicate that there were at some point plans to explore Equestria history some more. That backstory could have - probably retroactivelly - given a meaning to some of the painting / artworks featured in the show.

Update: about the Trojan horse theory
After researching some other details, I can now confirm that the bust can't be a reference to an Equestria version of the Trojan horse, at least story wise (the artistic inspiration is still plausible).

There actually is a Trojan horse in the source material. Queen Chrysalis uses it to get inside a town in her Fiendship is Magic IDW comic story arc. The ruler of the city is even shown having a wooden statue bust of himself! 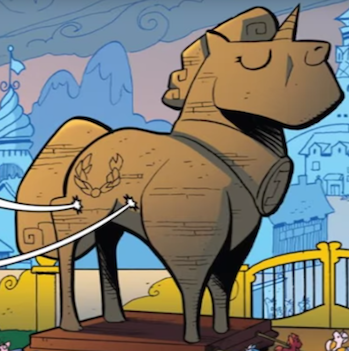 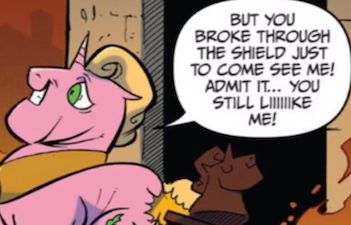 Sadly, neither the Trojan horse nor the bust matches the shape of the one found in the main media, so it is probable that they aren't meant to be the same.

That looks very much like the stereotypical images of the mythological Trojan Horse, the one described in the Aenid that the Greeks used to gain entry into Troy.

Here's a sketch of how the horse is usually described: 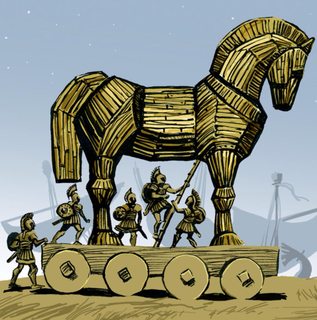 Note the very prominent, upright and squared-off mane. Most other wooden horse statues either omit the mane, or carve in into the neck as if it were lying flat. For some reason, Trojan Horse images always depict the mane standing upright.

My guess would have to be Pegasus since we are talking about magic horses.

Pegasus is also has a very prominent, upright and squared-off mane in most depictions.

Also since Pegasus is part of the ancient Greek lore, it would make sense to have statues and paintings of him. 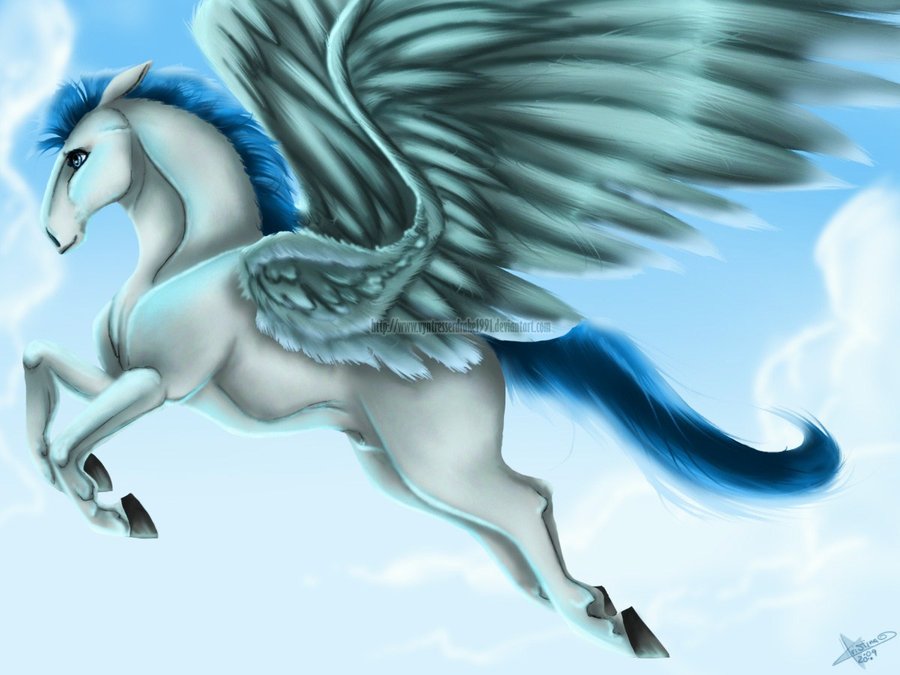 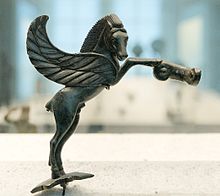 Not the answer you're looking for? Browse other questions tagged character-identification my-little-pony my-little-pony-fim or ask your own question.

5
I have a statue on a fountain near the town hall in Ponyville. Who am I?

8
Do any of the other “Mane Six” have surnames?
3
Why do the Apples have such a strong accent?
2
Can multiple ponies have the same special Talent?
5
Who are the two yellow mares in the season 5 poster?
4
Does Sunset Shimmer have a human equivalent?
14
Do My Little Pony: Friendship is Magic ponies have coats?
7
Does Tempest have a Cutie Mark?
4
Who are Princess Celestia and Princess Luna's mother and father?
1
Is “A Bird in the Hoof” a reference to “Harry Potter and the Chamber of Secrets?”