It was set in an underwater research station of some kind, which also had a tank holding Martian aquatic life, if memory serves.

The story centered around the discovery of a large alien creature described as having paws the size of car doors, which fought a killer whale at one point.

Ring any bells with anyone?

I also read this as a child, and it took me forever to find it as an adult.

It's Gordon Dickson's Secret Under the Sea. 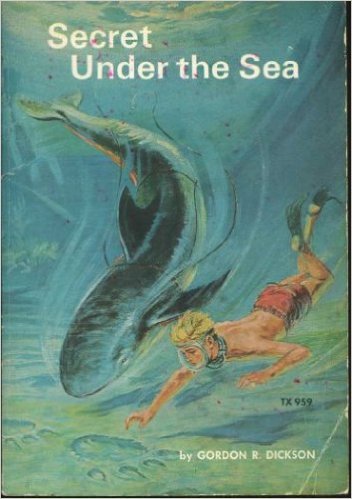 You say "The story centered around the discovery of a large alien creature described as having paws the size of car doors, which fought a killer whale at one point."

Here's a scan of an interior illustration showing the Martian creature with giant hands fighting the killer whale. It was a memorable scene for me too. 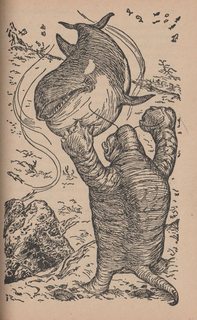 Hmm, looking at the ISFDB entry, it might have been part of a series....

What about "Aquarius Mission" March, 1978 by Martin Caidin? Taken from amazon: "Martin Caidin's near future science fiction in this case focuses on an undersea exploration in the Pacific near Alaska. One submersible is damaged by an unbelievable pod of whales acting in concert while a follow-up mission is destroyed by gigantic electric eels. What is at the bottom of the trench that is defending itself from investigation? The battleship-size research ship Sea Trench dives into the situation, seeking the answers. Excellent, quick-reading novel from the late Caidin who wrote 150 books on aviation, military, and space topics before tackling fiction, some of which became the TV shows Six Million Dollar Man and The Bionic Woman and movies like Marooned and (the badly mishandled TV movie) Manfac. "

Not the answer you're looking for? Browse other questions tagged story-identification aliens young-adult or ask your own question.

8
YA or MG novel from 60s or 70s (or earlier?), undersea habitat attacked by "vandal" submarine