Alien movie - suit with a saw, egg in the desert

I saw this movie when I was a kid, so it must be an 80s or 70s movie. It's an alien movie of sorts; all I can remember is there is a black guy, and the alien has some sort of suit with a saw. I remember one scene in which the alien throws a bloody human skull. I believe the main character is a female and it's set in a bunker in the desert. I remember the last scene shows an egg in the desert. 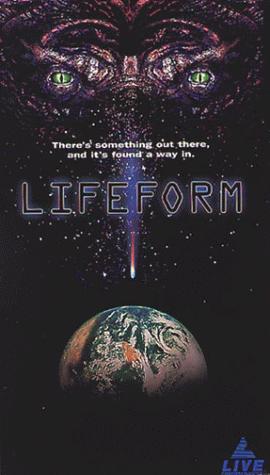 Invader, also known as Lifeform (1996) (IMDB entry here) is a low-budget movie where a team is assembled to investigate why one of the Viking landers has returned, on its' own power(!) from Mars. It turns out an alien egg from Mars has stowed away on the Viking lander, and due to the ineptness of the research/Army team, the egg starts to mature into a centaur-like alien.

For a cheap movie, several of the precepts were quite unique. The alien growing from an egg into a human-sized centaur with both insectoid and mammalian characteristics, the most impressive of which was a gorilla-like armored form with a protected head and second set of arms on top but under cover. Nobody knows how the Viking lander got off of Mars or even survived the entry back into Earth's atmosphere. The main character tries to counter the Army soldiers, but with casualties mounting, higher leadership takes the ultimate protective action at the movie's end.

One scene has a soldier killed with his own M-16 by using it as a spear into his torso.

R-rated only for violence. Many reviewers remark this could have been a 60-minute Twilight Zone or Outer Limits episode, instead of a movie.

(Spoiler - the Army nukes the base in the last 30 seconds of the movie, killing everyone, including the main character, but the Mars centaur has laid another egg, and in the aftermath, the egg has survived the nuclear blast - and is hatching/maturing. A voiceover or typed data says a second Viking lander has entered Earth's atmosphere.)

Astronauts discover relicts of an alien race on earth's moon.

The alien robot is able to rebuild itself from various materials and body parts - and does so in an earth laboratory using its saw.

The last scene shows the egg/football shaped robot "head" in a junkyard and we hear it repairing itself...

This movie haunted me in my childhood. Seeing it on YouTube today I must say that it wasn't Walter Koenig's (Pavel Chekov) most memorable role.

This is not a perfect fit with your query, but it reminds me of the movie "Screamers" which is a science fiction movie based on the short story "Second Variety" by Philip K. Dick. The movie was released in 1996.

Here is a synopsis with points of similarity with your question indicated by italicized boldface.

The story takes place on an alien planet, where two earth armies are locked into a "forever war." The story centers on one of the two armies, which has a company of soldiers permanently residing in a bunker built into the side of a mountain located in a desert.

There exist these weapons which are nicknamed "screamers." The screamers are intelligent machines which burrow underground making a beeline towards any sound, and they break upwards through the earth to attack with whirring rotary saw blades of death. One of the leading characters is female. Everyone wears a protective suit when going outside the bunker.

Not the answer you're looking for? Browse other questions tagged story-identification aliens horror or ask your own question.

16
Pre-80s movie with an alien monster who looks like a rock
8
Movie from the 70s or 80s that had a Cyborg
14
Old movie with abandoned spaceship and skull in helmet
9
Movie with humans in a floating cryopod where one believes an alien is his mother
9
Movie with giant alien fish creature?
5
Movie about alien coming through a TV set
6
Science fiction movie featuring an octopus type alien
7
1980s/90s animated sci-fi movie where people trapped in an egg escape by dropping a bullet which grows spikes
10
'80s movie with gold female alien