Is the AT-AT cockpit being a weak-point supported by canon?

In The Empire Strikes Back arcade game, AT-ATs can be destroyed by firing at their cockpits. 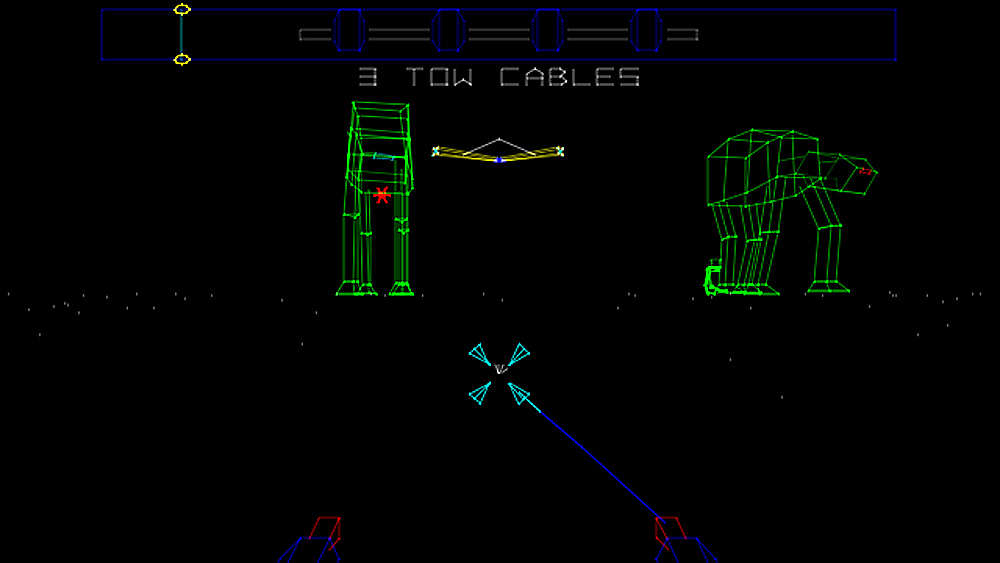 The AT-AT Wookieepedia page states that

The most vulnerable part of the walker was its flexible neck, which was susceptible to lighter blaster barrages. The legs were also somewhat unstable and could be tripped due to a high center of gravity, leaving the walker defenseless... The AT-AT also lacked armor covering on its underbelly, leaving the spot vulnerable to mounted guns or portable missile launchers.

There is no mention of a Rebel Snowspeeder being able to take out an AT-AT by aiming at the cockpit.

Is there any instance, canon or Legends, of this happening?

The first thing that I think is worth noting is that there is a deleted scene (an unfinished scene, to be more precise) for The Empire Strikes Back that features the AT-AT piloted by General Veers being destroyed by an errant snowspeeder (in case the time stamp on the video doesn't work, the relevant portion starts at 7:47):

As you can see in the video, the snowspeeder completely obliterated the entire "head" of the AT-AT in that animation. But that was from the speeder crashing directly into it - seemingly by accident - and not by using blasters, which undoubtedly would not deliver as much damage. Obviously, this contradicts what we see in the final cut of the movie, as the unfinished scene seems to show General Veers being killed, and his walker destroyed, before he could fire that fatal blast against the Rebels' shield generator. And Legends material indicate that Veers survived the Battle of Hoth. This is likely why the scene was never in any of the official cuts of the film; and the canonicity of deleted scenes pre-Disney was dependent on whether or not the content of those scenes conflicted with the film, according to the Holocron continuity database. If the respective deleted scenes were not in conflict, then they were considered to be G-Canon. Despite this, this does not mean that the viewport of an AT-AT wasn't a weak spot. We'll have to dig deeper into the lore to determine that.

So, on that note, it's worth pointing out that the viewports of AT-ATs, and other vehicles in the Star Wars universe (at least according to Legends), were made of "transparisteel," a transparent metal alloy that is stronger than normal glass. And, according to Canon, windows made from transparisteel could be made blaster-proof. However, the material is notably weaker than durasteel (the material that the rest of the AT-AT is made of, according to Legends). With that being said, it's entirely possible that it could be another weak spot in the walker's armor; but if so, it seems that it wasn't exploited very much, if ever at all (I could find no examples). It was likely too difficult to hit, and probably almost as ineffective, since the transparisteel was still strong enough to make it effectively blaster-proof (unless the blaster bolts came from heavier artillery, such as other AT-ATs).

Taking all of that into consideration, it makes sense that the viewport could potentially be exploited as a weak spot. But given the fact that this weakness was not exploited in The Empire Strikes Back, and the fact that I could not find any examples outside of the arcade game that you mentioned, I think it's fair to say that it probably was not exploited at all. In addition to that, it's unlikely that any of the characters involved in combat against an AT-AT would be unaware that transparisteel is weaker than durasteel; and the move to attempt to trip the AT-ATs was an act of improvisation on Luke's part, one that was still difficult to accomplish, and he wasn't even certain if it would work (as indicated here when he gave the order):

LUKE: Rogue Group, use your harpoons and tow cables. Go for the legs. It might be our only chance of stopping them. [emphasis added]

TL;DR My best guess as to why they neglected to strike specifically at the viewports in all of their runs would be that there was too great a risk of being shot down (as obtaining a clear and effective shot would require flying in straight at the AT-ATs head on, in full view of the walkers' high-powered cannons), and also an insignificant chance of successfully striking the viewport, let alone landing a sufficiently-damaging blow and taking the walker down that way.

UPDATE: This answer originally stated that General Veers is confirmed to have survived in both Canon and Legends. However, I have since discovered that the moment where the errant snowspeeder piloted by Derek Klivian (a.k.a. "Hobbie") crashed into and decapitated Veers' AT-AT Blizzard One is officially Canon (and featured in the now official novelization published since Disney's purchase of Star Wars). Despite this, it is technically not yet officially confirmed that Veers was killed during this incident, since this only happened in the novelization and not the film itself.

In fact, according to Wookieepedia's Canon entry on General Veers:

On October 2, 2017, during an interview with Ed Dolista for the Episode 256 of IndyCast, Julian Glover [the actor who portrayed Veers in The Empire Strikes Back] was asked by Dolista his opinion about Veers' fate. Glover stated that he thinks Veers may have survived since his apparent death happened offstage (although he is aware of Veers' fate in Glut's novelization) and that he could well be brought back if Lucasfilm wants.

This may seem strange, but it's actually not uncommon for future films to contradict the novelizations (even the film the novelization is adapted from will not always agree; this has happened since A New Hope was released). Pablo Hidalgo had a thread on Twitter that explained this:

Not to mention, retcons are not terribly uncommon either. For example, Boba Fett was not originally supposed to survive the sarlacc pit. George Lucas stated the following in the DVD commentary for Return of the Jedi:

In the case of Boba Fett's death, had I known he was gonna turn into such a popular character, I probably would've made it a little bit more exciting. Boba Fett was just another one of the minions, another one of the bounty hunters and bad guys. But, he became such a favorite of everybody's that, for having such a small part, uh he had a very large presence. And now that his history has been told in the first trilogy, y'know, it makes it even more of a misstep that we wouldn't make more out of the event of his defeat, because most people don't believe he died anyway. I'd contemplated putting in that extra shot where he climbs out of the hole, but y'know I figured that's . . . it doesn't quite fit, in the end.

Relics of the Old Republic

The Rebels are told by Captain Rex, a former Clonetrooper, to specifically target the AT-AT neck as a weak spot.

Those things are practically impervious to blasters, but they have one weak point in their armor, the neck. One well-placed shot from the main gun should destroy it. 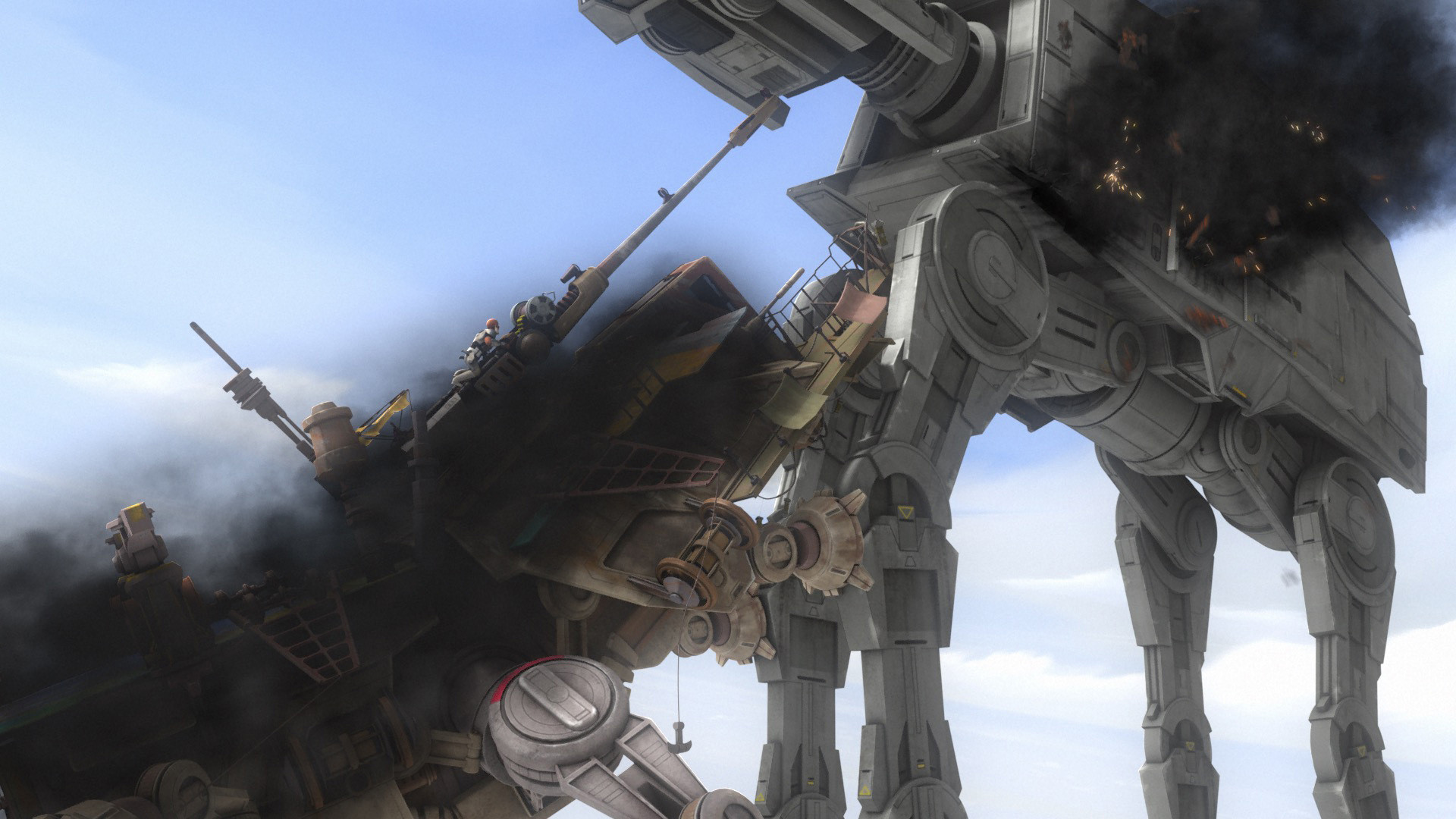 The Essential Guide to Vehicles and Vessels backs this up- on a diagram of the walker the neck was singled out and a footnote said once a walker was toppled at the battle of Hoth a 'well placed shot' (I'm paraphrasing there) was all it took to destroy it (This was also likely a reference to footage from ESB, where one AT-AT was destroyed that way, guess I should have gone with that first).

In the original novelization of The Empire Strikes Back, General Veers is killed when a speeder strikes the cockpit of his walker. Of course, that's not a blaster shot, but a heavier impact. However, it did lead to the walker being destroyed.

Not the answer you're looking for? Browse other questions tagged star-wars star-wars-legends video-games the-empire-strikes-back vehicles or ask your own question.

5
Exactly how strong is AT-AT armour?

50
Where was the Rebel fleet's rendezvous point at the end of The Empire Strikes Back?
6
Were any Expanded Universe vehicles besides the Juggernaut made canon?
55
Where did the idea that TIE Fighters are weak and disposable come from?
5
How does the B-Wing's cockpit maintain 'correct' orientation in space?
12
Why doesn't Boba Fett just point out where the Falcon is?
4
What is the farthest point in the Star Wars galaxy right before the Intergalactic Void?
4
Does the re-release of Jedi Outcast and Jedi Academy affect the canon status of the games?