What did the German text in Metropolis say?

This question is about the 1927 film Metropolis. Since Metropolis may not be considered as sci-fi as other material discussed on this site, I can ask this on movie.se?

I had always wondered when Freder goes down and sees the workers and the machine over loads and some stylized text appears on the screen. 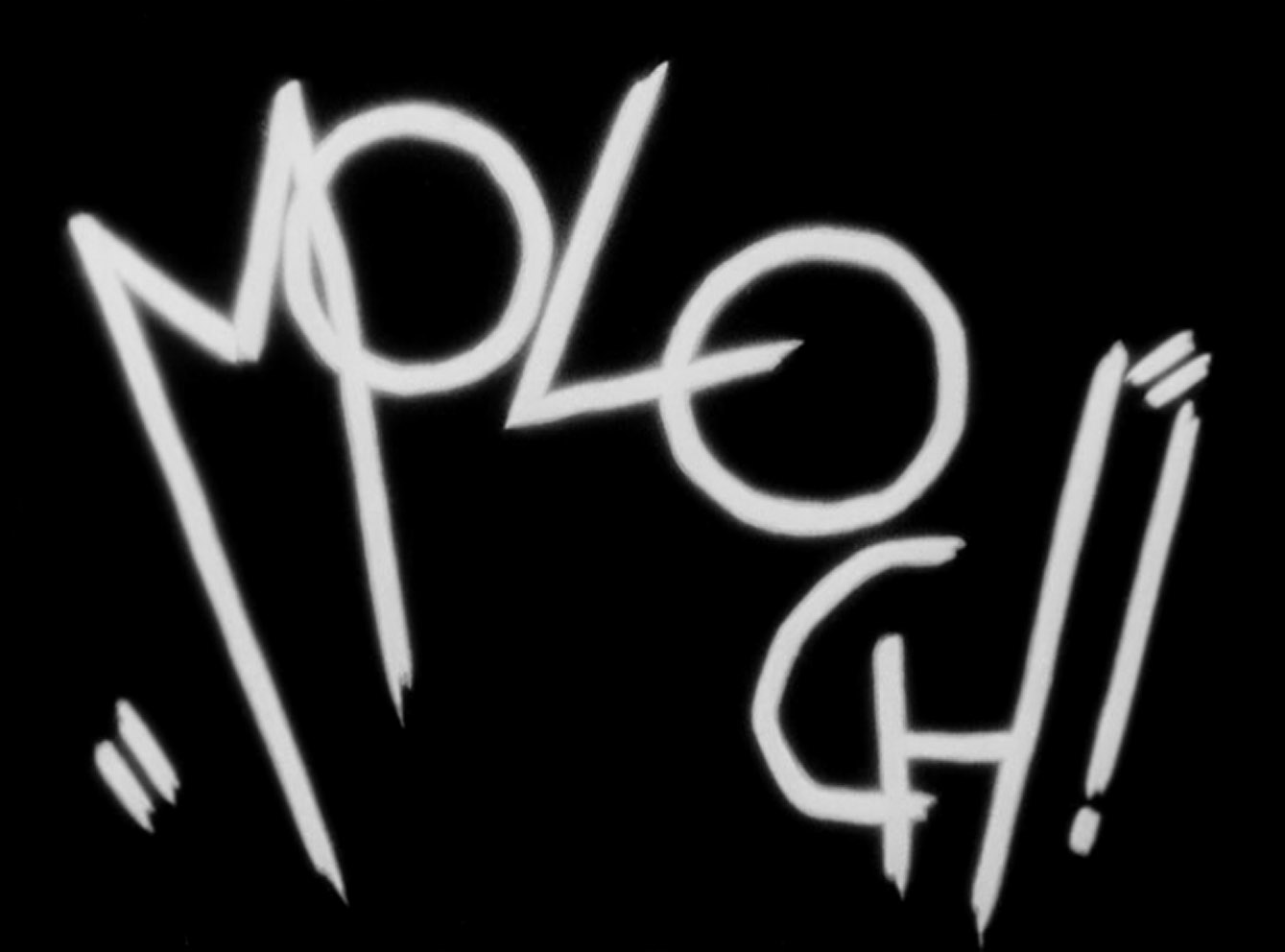 I thought it said "MOLOGH" but a Google search turns up "Moloch". I don't know this word? I searched and Wikipedia has

In Fritz Lang's Metropolis, the industrial machinery of the factory is envisioned as a sacrificial temple to Moloch.

Is this right? The picture in the wiki article looks like a bull and the machine in the film didn't. I'm not well versed in religion but could someone explain Moloch in simpler terms? I thought Christians and Jews didn't believe in any other gods or figure? Was this Freder imagining the machine was Mologh or did it actually happen?

I also found it interesting that the first group of men to be sacrificed were dragged in by guards, but then the rest marched in groups in an orderly fashion in an almost mechanically unconscious way. Maybe that's an allusion to fascism?

In German, a "moloch" is figurative speech. Yes, it's also the name of a Canaaite god, but it is usually used to mean something else.

A "moloch" is a creature - or imaginative power - that's gruesome, relentless, merciless and devours everything and takes lives.

A pacifist might describe a tank as a "Moloch aus Stahl und Öl" (moloch of steel and oil) - meaning it's a diabolical machine meant to kill.

The Duden gives the following explanation:

there is also the form "molochen" used as a verb. In German this means you work like crazy without beeing able to lead a decent living. It usually means that working class people are exploited in a factory. Its a total negative term to talk about working. You work and work and your dont make a progress in your social status. Instead it gets worse and worse and you finally decline even working like nuts. It means you dont have the chance to make a better live by working hard. Instead you work hard and it gets worse and worse. So it means work totally dominates your life like a false god and ruining it. You just work and theres nothing else in your life.

Not the answer you're looking for? Browse other questions tagged symbols metropolis-1927 or ask your own question.

12
What is the meaning of The Hunger Games' golden bird?
6
What exactly do the eighth and ninth symbols in a stargate address represent?
15
What (if any) is the symbolism of the Bajoran emblem?
16
Why did Marlon Brando want the “S” to be the symbol of the “House of El”?
14
What was the intended meaning/interpretation of the movie Labyrinth (1986)?
12
What is this symbol in The Legend of Zelda: Wind Waker?
19
What does the cover art of Cursed Child mean?