This was a teen-oriented sci fi novel published in the late 70s or early 80s. It involved kids (possibly related) who journeyed to a land described as having diamonds strewn about like common rocks.

My most vivid memory is the book cover, with an Intelligent Aquatic Creature against Yellow/Green Hypnotic Swirl background.

I think it is the following, which I read and loved when I was a teen.

Stranger from the Depths by Gerry Turner. 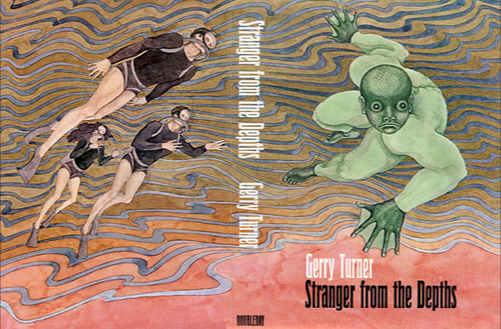 Found the answer on What's That Book.

Descriptions of the book:

"After sleeping for thousands of years the last survivor of a lost civilization returns to life to reveal secrets of the earth's core never imagined."

"a fantastic tale of two brothers who encounter strange beings who live below the ocean floor."

"It came out in the early 70's and was about the discovery of a coffin shaped stasis box buried under the ocean containing the last surviving member of an intelligent amphibious race..." "...a green man with webbed hands and feet"

"...underwater cities of Haad and Gaan"

"...A statue of one of the reptillian people. One of the reptillians separated from his people (maybe because of suspended animation?), ... The book started off with the protagonists setting up to photograph a tidal wave, with the wave washing away the rock exposing the diamond statue. The lizard's name was 'Saa', he liked peanut butter and jelly sandwiches..."

"... first Gary and his older brother filmed a tsunami, after which they came across a small statue of a mysterious ... Then Gary and his ... girlfriend Lori 'fess up about the underwater cave they've been sneaking away to, leading adults to organize a diving expedition to see what's down there. They find a large cavern containing a suspended animation capsule that contains a dead ringer for their statue. After they manage to revive him, their new friend Saa leads them down to his abandoned city underwater."

2
Identify a book (probably Children's Book) by cover art
13
Intelligent cells taking over the world
4
Book about a group of intelligent kids sequestered on an island, had a cover with a large robot attacking them
7
What's this post-apocalyptic book with intelligent animals?
12
YA sci-fi/fantasy story collection (most notable story being about a dinosaur-possessed crane)
9
Book with offloading a memory into a portable creature
9
Fantasy novel with bright yellow cover, male witch protagonist