It was from the heyday of web comics, and had one of those ambiguous names that told you little about the content and it feels like it's just right there in my brain and I can't remember it. Honestly hoping typing this out will help me remember.

It was a silly manga-style thing you had to read right to left. It centered around characters involved in a virtual reality in a big weird fighting RPG type... thing.

One character used an avatar that wasn't 'hers' but a friends, it was silly over powered and sort of dying or something. Upon losing your opponent could basically cannabalise your avatar for fun and profit... which might also 'mutate' the avatar.

In case there are more than one; the AR was experienced by light shone into the players eyes which were generally taped open. Actions were controlled by some weird light sphere you swished your hands through/around.

The art style was very 'anime,' pages were posted black and white.

I don't care if I find it again but if I could remember the name I might get some sleep.

So the answer finally popped into my brain today.

I was looking for 'Rules of Make-believe.' Which wound up looking a lot less professional than I remember but I guess nostalgia does that.

It's still up but it never really got itself rolling and just sort of ended.

Is it possible you're thinking of Not a Villain? The main character doesn't get the avatar, but from a random person she encounters who inherited the avatar after her friend died.

It's a little bit later than "the heyday of web comics", having been published in 2010, but it is in sort of an anime style, although the version I found is still left-to-right reading order. 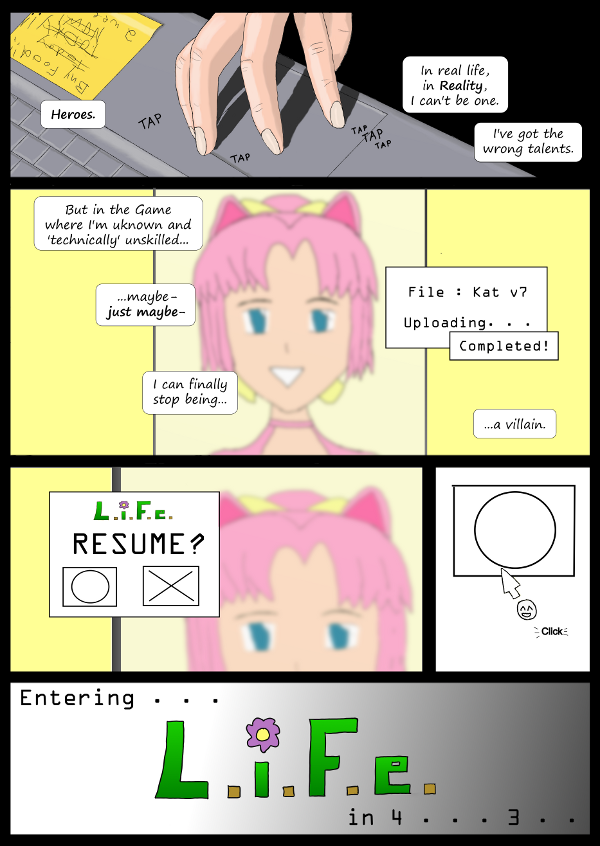 Not the answer you're looking for? Browse other questions tagged story-identification soft-sci-fi webcomics or ask your own question.

13
Story identification: SF webcomic with two women travelling around the solar system, working?
4
Comic Book Identification - Sci-fi/Fantasy - Lost Soul Earthworm
9
Looking for a sci-fi comic about a female soldier of fortune
11
What was this French comic, published circa 1990, involving a group of mages fighting?
12
Comic/Manga from early 2000's: thief-like guy with a snarky fairy companion, accompanied by a female mage and a tank
16
Racy and lewd Sci-Fi comic from late 1990's/early 2000's with two girls, fighting?
6
Series of novellas about a video game and weird silly putty