Why did Stannis emerge victorious against Wildling host?

In-universe, why would The King Beyond The Wall only bring barely a thousand men with him?

Out of universe, probably so that Stannis could defeat him and start his war in the north.

Stannis and his army should've been slaughtered that day by 100,000 wildlings.

Is it a plot-hole?

Not really a plot-hole. You are forgetting the strategic, grooming and material advantages that Stannis and his Knights enjoyed as compared to ill-equipped, ill-disciplined rabble brought together by Mance Rayder.

King beyond the Wall did not bring 1,000 warriors with him. He brought 100,000. Of course it wasn't possible for the show-runners to show 100,000 warriors and it would have cost a lot in CGI if they were to digitally create the effect. HBO thinks a lot before showing dragons and tries to limit their appearance as much as possible due to the costs incurred in creating CGI of one to three dragons. Now imagine the cost when it comes to 100,000 warriors. 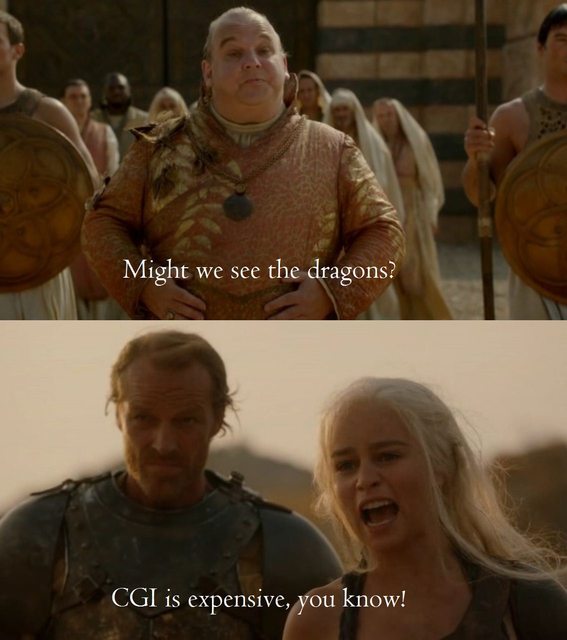 Nevertheless, Following is the force breakdown for Battle of Castle Black:

Mance had devised a clever strategy of attacking Castle Black from behind and opening the gates for his Soldiers without any fight with defenders on the Wall.

The plan was especially clever because it was going to be a surprise attack. However, due to courage of a Night's Watch man, Jon Snow, the advantage of surprise was lost and Night's Watch became aware of the Wildling plans. They successfully defended their castle from a rear attack by Wildling force under Magnar of Thenn, Styr.

As it happens however, Mance's numerical superiority soon started to take its toll on the defenders who were over-stretched and exhausted due to lack of replacements or reinforcements.

That's when Stannis Baratheon came in. 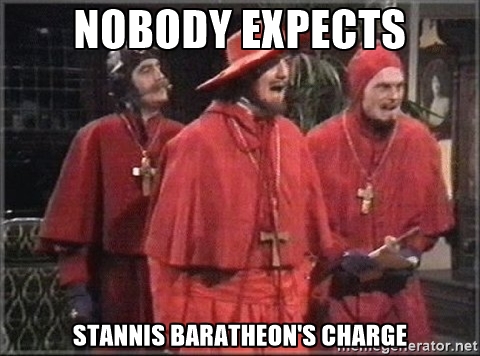 Wildlings had made a critical error. They did not expect any help from the Kings of Westeros and therefore were expecting attacks only from the Wall. This lead to them leaving their Eastern flank unguarded.

Stannis was riding from Eastwatch-by-the-sea. He struck a pincer attack on Wildlings, many of whom were still sleeping or just getting up. He successfully broke through Wildling lines (Or whatever passed for them). Wildlings were completely surprised and they had no experience in how to stop a charge of thousands of mounted Knights, equipped with steel swords and armor. Baratheon men cut through them like knife goes through cheese.

Wildlings should have kept calm and formed a shield line with spears in front to stop the Knights but they did not know that because they had no military formal training or strategy. They only fought with brute-force and that was their sole plan.

Stannis on the other hand, doubled the surprise and panic when his second column hit the Wildlings from rear through the forest and Wildlings started running for their lives.

The movement of Baratheon Army shown below, in a pincer attack, enveloping the Wildlings:

Once an army starts running, their numbers do not matter. They are only meat for their pursuers.

You haven't asked for Books' perspective but it will help you understand the battle better as compared to show.

This is how Jon described the battle in ASOS:

The free folk still had the numbers, but the attackers had steel armor and heavy horses. In the thickest part of the fray, Jon saw Mance standing tall in his stirrups. His red-and-black cloak and raven-winged helm made him easy to pick out. He had his sword raised and men were rallying to him when a wedge of knights smashed into them with lance and sword and longaxe. Mance’s mare went up on her hind legs, kicking, and a spear took her through the breast. Then the steel tide washed over him.

It’s done, Jon thought, they’re breaking. The wildlings were running, throwing down their weapons, Hornfoot men and cave dwellers and Thens in bronze scales, they were running. Mance was gone, someone was waving Harma’s head on a pole, Tormund’s lines had broken.

This is what Ser Thoren Smallwood had to say about Wildling numbers in ACOK:

“The numbers would be greatly against us,” Ser Ottyn had objected. “Craster said he was gathering a great host. Many thousands. Without Qhorin, we are only two hundred.”

Stannis Baratheon should have prevailed that day because:

Even if Wildlings had been able to repulse the Baratheon charge a few times (Despite their strategic and material incapacity to do so). Baratheons did not have to break themselves against the same force again and again. They were all horsemen. They could strike, fall back, go around and hit the Wildlings somewhere else, wrecking Havoc in Wildling lines everywhere on the front. Wildlings would have to deploy and redeploy their best men all over the front, which will take a lot of time given that they were almost exclusively infantry. By the time they deployed on new front, Baratheons could simply break away and hit somewhere else, giving the freefolk a merry chase. Result would have only been victory for Baratheons and defeat for the Free Folk.

If the Battle had been between any regular Army from South and 2800 Baratheons, the result would have been very different. The Southern Army would have broken down cavalry charge of Baratheons with spears and then slaughtered them due to lack of supporting infantry in Baratheon ranks. But the battle was not between Southerns. It was between the Southerns and the Notherners (Wildlings) who were utterly unprepared to stop the heavy cavalry and panicked at the first sight of Baratheon standards.

In Battles, Discipline beats numbers nine times out of ten.

1. Based on a count of cavalry squares visible on-screen, divided evenly between the two pincers. Stannis said four episodes before in "The Laws of Gods and Men" that he has about 4,000 men left overall; others must have been left at Dragonstone, bringing the baggage train overland from Eastwatch, didn't have horses, etc.

Heavy Cavalry against undisciplined (non-trained) infantry will win every time. Can't remember exactly how many soldiers Stannis had with him but even with only 100 mounted knights he could have wreaked havoc on the armies of the wildings.

Stannis wasn't expected so he could also use the element of surprise to cut into the flanks of the wildings and turn them. Doing that he makes a domino effect. Hundreds of wildings start to run, those hundreds turn to thousands and the whole time Stannis charges through the fleeing enemy until there is not that much left.

Wilding army is huge but not that well equipped. Their bone arrows won't do anything against full mail or plate armoured knights. So archers are useless. They don't have disciplined pike men so they don't have any way of stopping a full charge. The only thing they can hope for is to try to slow the cavalry down long enough so that they can start pulling the knights off their horses.

From the Heavy cavalry Wiki:

Heavy cavalry is a class of cavalry whose primary role was to engage in direct combat with enemy forces (shock troops).[citation needed] Although their equipment differed greatly depending on the region and historical period, they were generally mounted on large powerful horses, and were often equipped with some form of scale, plated, chainmail or lamellar armour as well as either swords, maces, lances, or battle axes.

Practical historical use of heavy cavalry against non trained troops:

From roughly 1650 to 1820, Spanish heavy cavalry fought Apache warriors in North America. Several small battles occurred; most of the time the Spanish lancers were outnumbered severely but still managed to defeat Apache armies, hundreds of men strong. The climax of these conflicts occurred in the region of present-day Tucson, Arizona in the United States in the late 18th century in Spanish Arizona.

Not the answer you're looking for? Browse other questions tagged game-of-thrones warfare or ask your own question.

4
Why did only a portion of Mance Rayder's army attack The Wall?

5
Why hasn't Mance Rayder attacked the Wall yet?
20
Why won't Roose Bolton send men to the Wall?
15
Why did Mance Rayder unite the clans?
19
Does Randyll Tarly hate the wildlings in the books?
20
What happened to Stannis' fleet?
16
Why can't the Others go around the Wall at sea?
1
Could these victims of Northern battles be raised by the Night King?
5
If Cersei is pregnant, why can't you see it?
4
Why can't Sansa simply send for Jon?
1
Did Jon really face a choice between these alternatives?