I am looking for the name of a sci-fi cartoon.

Chronology and other relevant information

I don't think I ever saw it on TV. I only ever watched the same 3 episodes on VHS.

Since the OP has elected not to self-answer..I'll do it for him.

This is StarCom: The U.S. Space Force 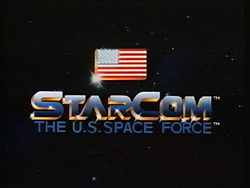 Starcom: The U.S. Space Force is a 1987 animated syndicated U.S. television series inspired by a motorized toy franchise manufactured by Coleco. It was produced by DiC Enterprises and distributed by Coca-Cola Telecommunications. The plot detailed the adventures of an American astronaut brigade as they fought off attempted invasions by Shadow Force, a nasty collection of aliens and robots led by the nefarious Emperor Dark. The toy line was popular in Europe and Asia, but was unsuccessful in the North American domestic market.

Young hero Col. James “Dash” Derringer, an ace Starcom pilot, was the star of the series, and several of his teammates were family members. He was also backed up by the resourceful ace pilot John “Slim” Griffin, whose niece was yet another Starcom pilot. Other heroes on the Starcom side included Col. Paul “Crowbar” Corbin and Admiral Franklin Brinkley

Not the answer you're looking for? Browse other questions tagged story-identification spaceship space cartoon or ask your own question.