I remember reading a comic book from local (Dutch) library in the early '80s. This is a European style comic book, a hard cover.

The protagonist had gotten a spaceship (probably in an earlier book), that he didn't quite know how to operate. After pushing an inviting button, the ship said something to the effect of "you've pressed the 'stress' button, mister president. I will now bring you somewhere to relax." With that, the ship flew to a planet, where two intelligent species live: pedestrians, and a species with wheels instead of feet. These two species are perpetually at war.

The protagonist uses some sort of multi-functional gadget (a d-shaped stick) to completely disassemble the ship. He somehow upsets both species, who set aside their differences to fight him and his small crew (two or three other characters).

He tries to reassemble the ship to get away (using the same gadget), but leaves the navigation computer behind, since that's closely tied to the "panic button". As a result, the ship can fly a bit above the water, but it can't leave the planet. He then uses his gadget to separate the two components, and flies away.

We see the planet living in peace, with pedestrians and "wheel-goers" living in harmony. The still talking panic module has been put on a pedestal or altar, and is revered since it has been recognised as the bringer of peace.

You´re referring to a Dutch comic series called "Arad en Maya". The story you mention is the second episode of the comic, called "De Wielgangers". More information can be found on Wikipedia

Check out the comic book database Zilveren Dolfijn for images of the cover. The site isn't currently being updated, but "Arad en Maya" can still be found over there. 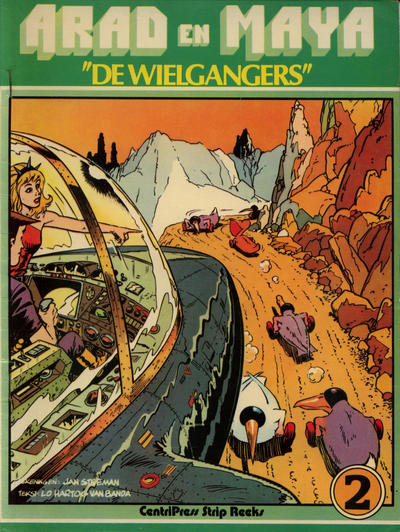 4
Looking for a comic book about space travel and a royal family
10
Sci-fi novel with humans and alien hive enemy stranded on planet together after space battle
6
Looking for the name of a scifi comic strip from a book-for-boys book
5
Looking for a book title about a planet with poisonous soil
5
Book where people catch the Green Sick, an alien disease, they need evacuating off world to be cured