Are Batman and Superman brothers?

Are they half brothers?

On the DC Comics site it states that Martha Wayne went into the witness protection program after she was targeted by a mob hit,

Millionaire Bruce Wayne is just a kid when he watched his parents get gunned down during a mugging in Gotham City. The crime would define his life, as he dedicated himself to becoming the world’s greatest weapon against crime—the Batman. What the world doesn’t know is that Bruce’s mother, Martha Wayne, was the real target for the mob hit the night that Bruce’s parents were murdered. While in the ambulance it was discovered that she was still alive, and the doctors were able to save her. She signed over guardianship of Bruce to the family butler, Alfred Pennyworth, in hopes that the young boy would be protected, and she was put into the Witness Protection Program and sent to Smallville, Kansas—a quiet town where nothing ever happens.

There Martha met and married a nice young man named Jonathan Kent. With a new inability to carry a child due to the bullet wound, Martha and Jonathan were unable to have the baby they so longed for. However, their prayers were answered when out of the sky, a rocket landed in a nearby field as the couple was driving by. There was a small baby in the rocket who they adopted and gave the name Clark Kent, and who would grow up to be Superman!

So by that it would seem that 'Martha Wayne' and 'Martha Kent' are the seem to be the same person, which would make Bruce Wayne and Clark Kent half brothers.

And in the movie Batman vs Superman, we see Batman stop trying to kill Superman after he hears Superman mention "Martha".

I don't know if this holds any significance?

Actually same site you linked says that those were fake bios:

In addition to the fake projects, we posted a link to “newly updated” profile pages for Batman and Superman, and if you read any of them, you may have noticed a shocking connection between Bruce Wayne and Clark Kent…and their mothers.

Yes, they’re not just best friends and two of the most beloved super heroes on the planet. Superman and Batman are also half-brothers.

Or at least they were for one day in the hearts and minds of some of our fans. The authentic profiles have now been restored to the Batman and Superman pages, but not before several of you commented on the changes. And why not? Stranger things have happened in comics. And it is a pretty big coincidence that both their mothers are named Martha.

So what do you think? Were you fooled by the fake bios?

I. e. affirming that this was an elaborate April Fool's Day joke.

To be fair, in the mid 2000s Superman/Batman comic, there was an alternative reality where they were raised as adopted brothers.

This was issue #17, basically a "forced changed timeline" situation, where 3 criminals from the 3000th century: Lightning Lord, Cosmic King, and Saturn Queen (essentially evil siblings of the Legion of Superheroes trinity Lightning Lad, Cosmic Boy and Saturn Girl) came back to "our time," eliminated a number of the other heroes [Aquaman, Green Lantern, Flash and Martian Manhunter] then "arranged" to pick up Bruce and Clark at their pivotal origin moments. They then raised them as their "children" and let them develop their superhero personas, but guided the boys with their intentions, turning them into dictators of their world with their respective intelligence, skills, and abilities. 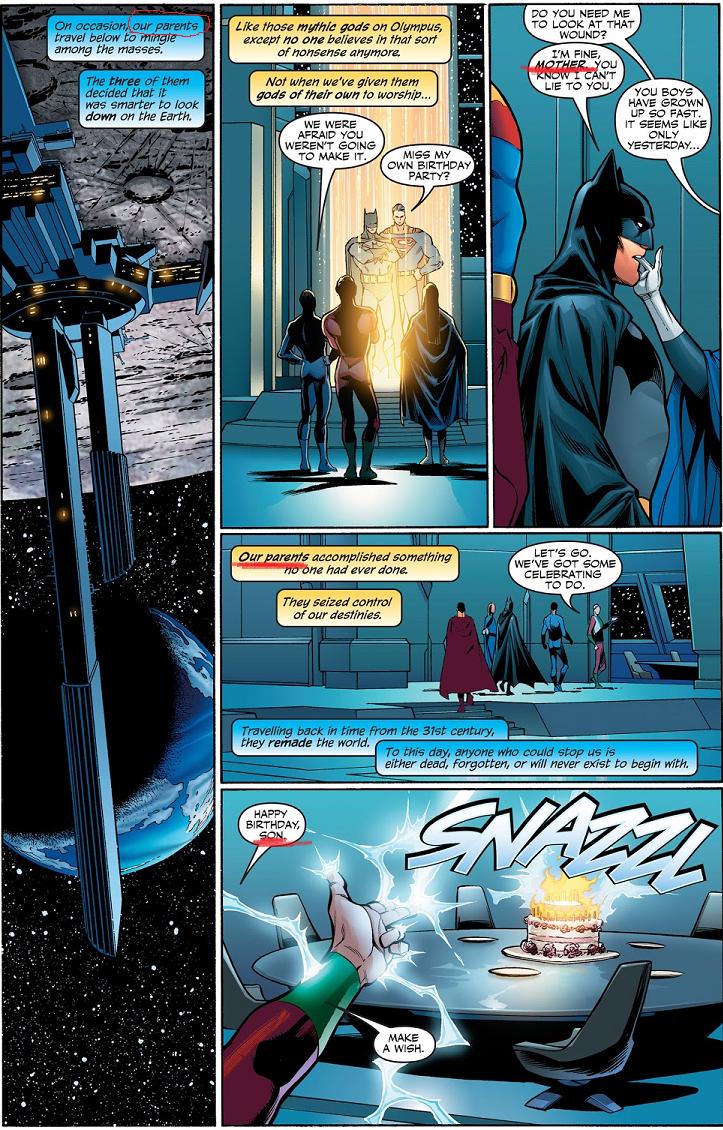 On the next page, Superman basically alludes to them being family: 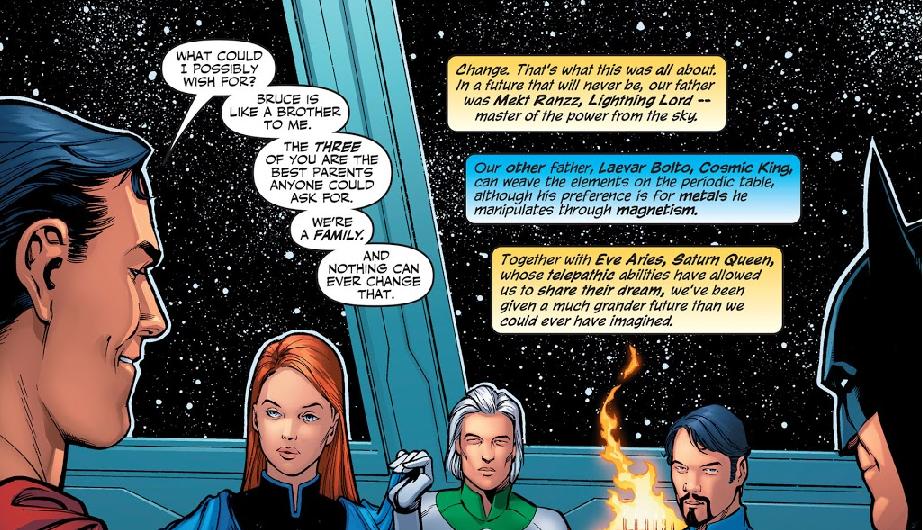 The only other story I could think of that comes close to this would be Superman: Speeding Bullets where Kal-el's ship landed in Gotham, was found by the Waynes and he was raised as "Bruce," but since Bruce himself wasn't there, it doesn't really count to my mind.

1
How has the Batman V Superman climactic reveal been treated elsewhere?

58
Where was the first appearance of the idea that Batman is the real personality and Bruce is the mask?
10
Why did Jonathan and Martha Kent attach a Cape to Superman's costume?
2
Has the Thomas Wayne Batman ever Appeared Outside the Flashpoint storyline?
23
Who is the girl sleeping besides Bruce Wayne when he wakes up from his nightmare?
22
How does Lex Luthor know Superman's identity?
12
Is Alfred the moral conscience of Bruce Wayne/Batman?
0
Does Clark Kent know who Bruce Wayne is in this scene?
8
Does Lex Luthor know Batman's identity?
20
Did Batman ever tell Superman “the last time when you really inspired anyone was when you were dead”?
12
Does Batman know he's Superman's boss since he owns the Daily Planet?