Why did Worf wear red in TNG Season 1?

I've read several questions and answers here about the uniform colours in Star Trek and their significance. E.g. this answer gives the following list of uniform colours covering the TNG era (with supporting links to Memory Alpha):

Now let's take a look at the main cast from the first season of TNG: 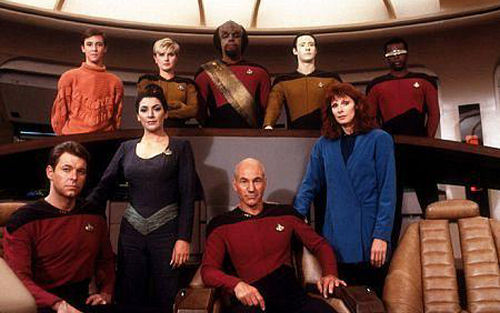 Most of their uniform colours make sense according to the above classification: as commanding officers, Picard and Riker wear red; as a security officer, Tasha Yar wears yellow; as a medical scientist, Dr Crusher wears blue. But what about Worf?

In the first season, he appears to be a junior security officer - until Tasha's death, when he becomes Acting Chief of Security. Later he's formally instated as Chief of Security and begins to wear yellow, which makes sense. But why should a junior security officer wear red, the colour of the command division? He's not a commanding officer, and indeed seems to be lower-ranking than most of the bridge officers (in fact, originally he wasn't even going to count as part of the main cast).

Why does Worf wear the 'command division' colour in season 1?

He was not a junior security officer before Tasha's death

The simple answer is that he was not part of the security crew before Yar died. From his career summary on the official Star Trek web site:

Not the answer you're looking for? Browse other questions tagged star-trek star-trek-tng worf star-trek-uniforms or ask your own question.

27
Meaning of uniform color in Star Trek Voyager
22
Why did Worf switch to red in DS9?

62
When did the red shirt careers change to yellow shirts in Star Trek and why?
13
Why does Hoshi wear a Blue (science division) uniform when she is the comms officer?
23
Why is Data's uniform gold and not red?
19
Why is Worf always called by one name?
64
Has any Star Trek character appeared in all three division uniform colors?
21
In Star Trek, what are all the low-ranking Command Division officers doing?
10
Can Operations Officers attain the rank of Commander?
50
Why does Captain Kirk wear green in the DS9 episode Trials and Tribble-ations?