Why did the Snow speeders attack the AT-ATs from the front?

Having just watched Empire Strikes Back again with my sons, I noticed that Luke and his fellow speeder pilots are under heavy fire on every attack run.

The thing is: The AT-ATs appear to only have forward firing weapons with a small angle, and they are not fanning out to cover more angles. There are no anti-aircraft weapons shown anywhere in the scene. They are mostly untouched while circling the walkers or attacking from the side on one occasion.

This implies that after every run, the speeders regrouped directly in front of the walkers for the next suicidal run. Why did they do this and not attack repeatedly from the sides?

Note: I can imagine attacking from the rear was impossible due to the shield's proximity as well as useless due to armor, but the vulnerable neck is most exposed from the sides, and they were able to fly there in the movie.

In fact they did attack from the side as well as head on. 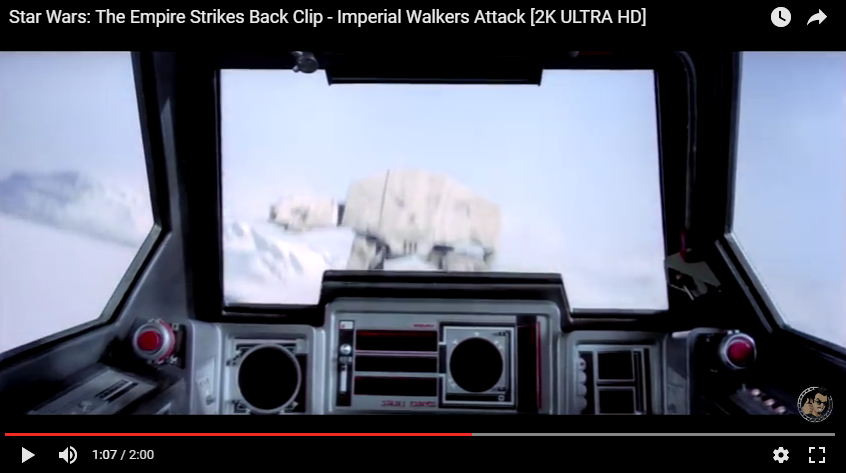 Both head on attacks (presumably aimed at the cockpit), side (the troop transport areas) and legs all proved ineffective as the armour was "too strong for blasters".

The rebel pilots had two key tasks here; to destroy the walkers (if possible) or simply distract the walkers (preventing them from firing upon the shield generators and the troops in the trenches). Flying around behind the walkers would clearly give a personal tactical advantage, but given their heavy armour there's actually very little point firing off ineffective pot-shots while the walker blows up the stuff in front of it.

Note also that the ultimate goal here isn't to destroy the walkers or kill the ground troops, it's to run 'interference' and give the rebel ships time to escape. That means getting in front of them and making themselves a visible nuisance.

Two blasts explode just off the speeder’s starboard side. You bank hard right, circumnavigating the explosion and flying out wide to the beast’s flank, where its great tusk-like guns can’t hit you. Then you kick up the accelerator and aim at its legs. “You with me, Dak?”

From the trenches in front of the base, rebel fire keeps the platoons of stormtroopers at bay, preventing them from rushing the power generators. This is the point of the whole attack. No power generators, no shields. No shields, and those Star Destroyers up in the sky scorch the rebel base into oblivion.

Star Wars: The Empire Strikes Back - So You Want to be a Jedi?

They didn't know the AT-AT's were well heavily armored. Not counting Rebels, this is the first time we've seen AT-AT's on the big screen. They, like us, didn't know that the walkers could take a beating and give some themselves. For all they knew, they thought firing at their heads would've finished them off.

58
How did the AT-ATs get to the surface of Hoth?
46
Battle of Hoth: how did the AT-ATs manage to disable the shield generator?
31
Why didn't the rebels on Hoth use X-Wings to fight AT-ATs?
25
Could Vader really have crushed the Rebels on Hoth?
25
Why didn't the Empire send other forces in alongside the AT-ATs?
12
Why didn't the AT-AT's stop walking?
8
Why couldn't the Clone Gunship shoot down Count Dooku as he was escaping Geonosis?
5
Why did Luke's lightsaber end up in the snow?
22
How did Palpatine's Chancellorship survive the Zillo Beast attack?
38
Why are there so many infantry battles in Star Wars?