Why did Darth Vader reveal to Luke that he is his father?

In my opinion, Anakin Skywalker and Darth Vader are different. In Return of the Jedi, Luke says, "I've accepted the truth that you were once Anakin Skywalker, my father". Then Vader says, "that name has no longer any meaning for me." But the question is: in The Empire Strikes Back, why does Vader reveal to Skywalker that he is his father?

He wants to give Luke a reason to join him...

Here is the full scene:

Whether Vader wanted to have Luke help him depose the Emperor is up for the debate, but intent was clearly to turn Luke to the Dark Side.

Vader and the Emperor had a conversation about Luke, the threat he represents, and what can be done about it.

To sway him to the Dark Side

Directly after informing Luke of his parentage, Vader turns off his lightsaber and attempts to persuade Luke to join him.

“Search your feelings,” Vader said, sounding like an evil version of Yoda, “you know it to be true.”

Then Vader turned off the blade of his lightsaber and extended a steady and inviting hand.

Bewildered and horror-stricken at Vader’s words, Luke shouted, “No! No!”

Vader continued persuasively. “Luke, you can destroy the Emperor. He has foreseen this. It is your destiny. Join me and together we can rule the galaxy as father and son. Come with me. It is the only way.”

The Empire Strikes Back (novelization)

Presumably Vader felt that Luke would be more receptive to a peaceful approach from a family member than by threats of violence from the Emperor’s enforcer. This is borne out by Vader’s telling Luke that they can “rule as father and son.” Vader also knows that Luke never knew his biological parents. He loved the parents who raised him (his aunt and uncle), but Vader might well have suspected that knowing his biological father would have a certain appeal to Luke.

The revelation further serves to shake Luke's faith in Obi-Wan, and by extension everything he has been taught as a Jedi:

Luke’s mind whirled with those words. Everything was finally beginning to coalesce in his brain. Or was it? He wondered if Vader were telling him the truth—if the training of Yoda, the teaching of saintly old Ben, his own strivings for good and his abhorrence of evil, if everything he had fought for were no more than a lie.

The Empire Strikes Back (novelization)

It also helps set up a feeling of inevitability. The son must join the Dark Side, as the father did. As Palpatine says:

Palpatine looked at Endor, then back at the lightsaber in his hand. ‘Ah, yes, a Jedi’s weapon. Much like your father’s.’ He faced Luke directly.

“By now you must know your father can never be turned from the dark side. So will it be with you.”

Return of the Jedi (novelization)

Lucas worried that children would not trust this revelation (point 14) unless it was confirmed by a trusted character.

14. Yoda was to sit this one out, but he was added after consultation with child psychologists made George Lucas decide he needed an independent character to confirm Darth Vader’s claim that he is Luke Skywalker’s father. Now you know why Yoda doesn’t do much for the rest of the movie.

Hence the inclusion of these lines:

Yoda: Your father he is.

As you can see, it was considered likely that Vader's revelation would be taken as a trick, designed simply to turn Luke to the dark side.

In truth, Vaders revelation was the truth, designed to turn Luke to the dark side.

The reason why Vader thought that this revelation would be so effective is because Vader himself values his family connections.

Luke was Vader's last living connection to Padmé, his wife.

Anakin Skywalker joined the dark side and became Darth Vader in order to save Padmé's life.

The cutscene from the Lego Star Wars video game of The Empire Strikes back displays Vader holding a picture of him and Padmé.

This suggests that Vader still loves Padmé, and might possibly care for his son on some level. Remember, when Padmé tells Anakin she is pregnant, he says:

Anakin: Are you all right? You're trembling. What's going on?

Anakin: That's... wonderful news. This is the happiest day of my life.

Vader was unaware that his child (well, children) had even been born. Learning that his son was alive would probably have reawakened the "good" in him.

Luke: There is still good in him.

Darth Sideous suspects that Luke's weakness also lies in his family. He instructs Vader to wait for Luke on the forest moon of Endor.

Darth Vader: He will come to me?

The Emperor: I have foreseen it. His compassion for you will be his undoing. He will come to you and then you will bring him before me.

Darth Vader: As you wish.

This proves to be a good tactic. Luke does indeed attempt to spare his father's life, stating multiple times that he does not wish to fight him.

Luke: I will not fight you, father.

Darth Vader: You are unwise to lower your defenses!

Luke is also convinced that, rather than destroying vader, his father is redeemable, and can be turned back to the light side of the force.

Luke: Your thoughts betray you, Father. I feel the good in you, the conflict.

Darth Vader: There is no conflict.

Luke: You couldn't bring yourself to kill me before and I don't believe you'll destroy me now.

However, revealing the family connection only made Luke more determined to save his father.

Darth Vader: The Emperor has been expecting you.

It also strengthened the bond between Luke and Vader, whilst clouding the emperor's powers.

Darth Vader: A small rebel force has penetrated the shield and landed on Endor.

The Emperor: Yes, I know.

Darth Vader: My son is with them.

The Emperor: Are you sure?

Darth Vader: I have felt him, my master.

Ultimately, there are two answers:

But he revealed it at a time when Luke was helpless anyway- Luke was dangling over a chute, weaponless, defenceless and injured. Vader did not have to reveal that info to Luke at that time, except- as seen in the photo taken from the Lego Star Wars clip- out of love for Padmé (and possibly for Luke). 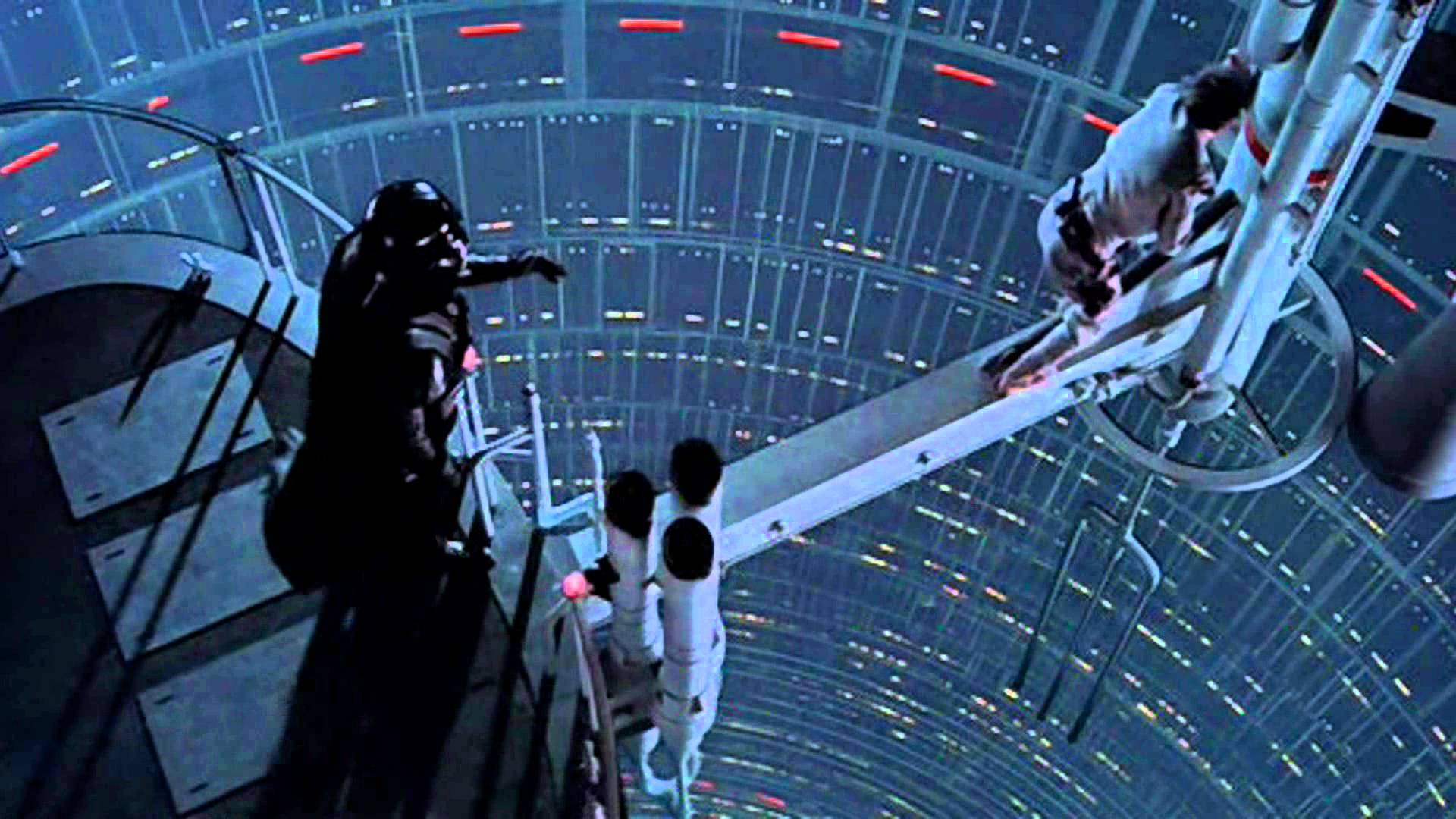 As we know, the story ended up as a tale of redemption- the Jedi, Anakin Skywalker, returned to the dark side, and saved his son's life. However, the set up would easily have allowed for an entirely different ending- one in which Luke Skywalker turned to the dark side. This was actually an idea they toyed with:

'His last lines were going to be "Now I am Vader. Now I will go and kill the [Rebel] fleet and I will rule the universe."'

As you can see here, this offers further in-Universe implications. Luke was drawn to the power he would gain from ruling the Universe. Not only is this part of the speech that Vader gives to Luke-

Vader: Join me, and together we can rule the galaxy as father and son

Anakin: No. Don't you see? We don't have to run away anymore! We no longer have to hide our love for each other. I am more powerful than the Chancellor, I... I can overthrow him! And together, you and I can rule the galaxy! We can make things the way we want them to be!

Maybe at that point his past self had no meaning for Vader, but he knew family and friends clearly had meaning for Luke. It's a weakness that'd be foolish not to exploit, so he used it to shake Luke's trust in Kenobi and manipulate the impulsive and hotheaded boy into joining the dark side. (The plan probably was to kill Darth Sidious at same point and make Luke his apprentice, but who knows.)

Vader was pretty certain he could predict Luke's reactions (and he was partly right, after all Luke walked straight into a trap to save his friends).

So why not play his trump card? Vader almost had him. He threw Luke completely out of balance. From the script, when Vader prepares for boarding the MF :

Luke realizes that Vader's ship is very near. He feels resigned to his fate. He senses that he is beaten, more emotionally than physically.

He felt betrayed by Obi-Wan, he kept moaning "Ben, why didn't you tell me?". If then Vader had him, there's a good chance Luke would have become corrupted.

He wanted Luke to join him to overthrow The Emperor and rule the galaxy together. Had he not revealed it, Luke would've been more difficult to control. He just didn't count on him jumping into a deep dark pit rather than surrendering.

There is no contradiction; in ROTJ he means he no longer identifies as the Jedi he once was, which the name Anakin represents. But that doesn't mean he denies that he's the same person biologically that he always has been. In Empire, he refers to the biological bond he shares with Luke, which is a matter of genetics and has nothing to do with his previously being a Jedi.

An attempt to throw the force further out of balance

In Star Wars canon, whenever the force is out of balance, there is a chosen one who is automatically strong with the force that is something of an attempt at universal homeostasis. However, if Vader was able to control Luke, the new chosen one, and his powers, the Dark side would gain even more power over the light than it already had. I agree that Anakin and Vader are different people, so I think Vader is using this as emotional extortion only to further his own purposes.

Not the answer you're looking for? Browse other questions tagged star-wars darth-vader luke-skywalker the-empire-strikes-back return-of-the-jedi or ask your own question.

71
Why Did Sidious Tell Vader Who Luke Was?
32
Why does Palpatine refer to Luke's father as Anakin?
110
When and how does Vader learn that Luke is his son?
21
How did Luke know Vader needed his helmet to survive?
8
Who saved Luke: Anakin or Darth Vader?
18
Why did Vader and Maul abandon their name while the other Sith Lords in the Movie didn't?
20
If Darth Vader discovered Luke was his son from the Emperor in the 2004 retconned version of “The Empire Strikes Back”, then how did the Emperor know?
46
Who/what exactly does Darth Vader believe taught Luke between the events of “The Empire Strikes Back” and “Return of the Jedi?”
1
Did Darth Vader feel remorse for killing Jedi?