Can Deadpool bleed out?

Can Deadpool bleed out like a normal person and lose consciousness?

We all know he won't die from the loss of blood and that his threshold for many things is much higher than an ordinary person, but would he suffer similar symptoms to a normal person and lose consciousness if enough blood was lost?

In the film, Deadpool gets shot and you see a fair amount of blood appear on his clothes, so does he bleed out?

I think any canon information is relevant to this question, movie or comic books, something that shows his ability to handle injuries.

Considering the movie and video game alone I'm pretty sure it's safe to assume that he can indeed suffer from such symptoms and his body isn't immune to such conditions. Unfortunately I haven't read any comics so far.

In the movie there are several instances where he loses his consciousness, he hallucinates at least once and from memory he also talks about having diarrhea at one point. If he'd be immune, this shouldn't happen.

In his video game there are several similar situations. For example, at one point he's impaled, but once getting conscious again, he won't notice it at first. This joke wouldn't be possible without him losing his consciousness. Also not to forget the appearance of his biggest fan...

So overall he can suffer from blood loss and traumas, but his body would probably still be able to regenerate over time.

Deadpool can bleed out. Being that he is pretty much like any normal person and that his regenerative powers are not as fast as Wolverine, there is a possibility that he will bleed out enough to lose consciousness.

Of course he will regenerate and return to normal much faster than your ordinary person. 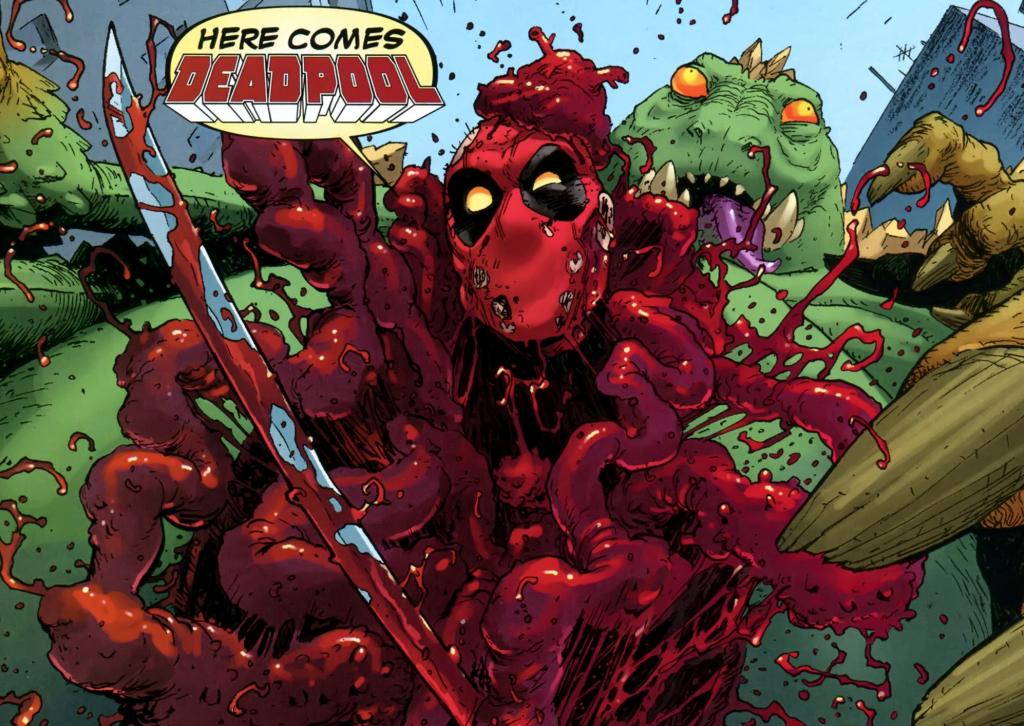 Deadpool has the exact same power as Wolverine but he can't die due to a malediction cast by Thanos.

I have read a comic book where Wolverine bled till he couldn't fight any more. It was the combat Wolverine VS X23, the female clone of Wolverine; she had the same regeneration power so she knew how to defeat him. She stabbed him with her claws and put dirt in the wounds, so the wounds stayed open. So when there was no blood coming to the brain, he fainted.

However, in another comic (which I didn't read, I saw just one page) Nick Fury was talking to Wolverine, beheaded but conscious. He explained that Logan breathes through his skin. This is probably the same with Deadpool who talks often with his head decapitated.

12
Looking for a Deadpool comic where Deadpool poses as Batman
21
Can Deadpool be killed?
15
Which graphic novel actually contains the events of how Deadpool became Deadpool?
9
What happens if Deadpool can no longer access food?
16
What is it with Deadpool and chimichangas?
7
When does Deadpool figure out he can grow back parts?
14
Can Deadpool drown?
1
Has Deadpool ever had telepathy?
5
When is Wade "Deadpool" Wilson's birthday?