Did Sidious not believe that Anakin would destroy the Sith and bring balance to the Force?

On the assumption that Sidious knew of the prophecy and that Anakin was the Chosen One, did he not believe it would be his destiny?

Perhaps he thought that turning Anakin to the Dark Side and giving him a Sith name would counter the effects of the prophecy, or that the Jedi had misunderstood what it meant.

The prophecy of the Chosen One is a Jedi prophecy. As a Sith, Sidious has no reason to believe that it would come true in a way that favored the Jedi. He would regard it as no more than wishful thinking on the part of the Jedi. Sidious would have even less reason to believe the prophecy of the Chosen One would come true after Order 66 -- with most of the Jedi dead and the Sith in control of the Galactic Empire, the prospects don't look good for the Jedi.

Obi-Wan: With all due respect, Master, is [Anakin] not the Chosen One? Is he not to destroy the Sith and bring balance to the Force?

Mace Windu: So the prophecy says.

Yoda: A prophecy . . . that misread could have been.

The fact that Sidious managed to turn Anakin to the dark side would be a pretty good indication to Sidious that Anakin was not the Chosen One, even if Sidious believed the prophecy might eventually come true. After all, how could Anakin/Vader destroy the Sith if he was a Sith himself?

The Legends novel Darth Plagueis provides yet another interpretation of the Jedi prophecy of the Chosen One (from Dooku) which favors the Sith. The following is a conversation between between then-Senator Palpatine and Dooku (still a member of the Jedi Order at the time), in which Dooku revealed the prophecy to Palpatine and his own interpretation of it. Because Dooku was still a Jedi, Palpatine deliberately played dumb so as not to reveal the fact that he was a Sith Lord:

“The Order’s place in this is a matter Sifo-Dyas and I have discussed endlessly,” Dooku snapped. “But the members of the Council are not similarly inclined. They are entrenched in archaic thinking, and slow to embrace change.” He paused, and adopted a sinister look. “Don’t let yourself be fooled, Palpatine. They see dark times ahead. In fact, they think of little else. That’s why they have allowed the Jedi to become involved in parochial conflicts like those at Galidraan, Yinchorr, and Baltizaar, which are like brush fires born of windblown embers from a massive blaze just beyond the horizon. But instead of actually rising up against the corruption in the Republic, perhaps disbanding the Senate entirely for a period of time, they have become fixated on prophecy. They await the coming of a prophesized redeemer who will bring balance to the Force and restore order.”

“A redeemer?” Palpatine stared at him in authentic surprise. “You’ve never alluded to this prophecy.”

“Nor would I now if I still thought of myself as loyal to the Order.”

“I never considered that the Force needed to be balanced.”

Dooku’s lip curled. “The Order interprets the prophecy to mean that the dark tide needs to be stemmed.”

Dooku had an answer ready. “Here is the truth of it: the Jedi could fulfill the prophecy on their own, if they were willing to unleash the full powers of the Force.”

“The full powers of the Force,” Palpatine said. “I’m afraid you’ve lost me.”

Dooku blew out his breath. “Perhaps it’s something we can discuss in the future.”

“You’ve made your decision, then?”

Dooku rejected the Jedi Order's interpretation that "balance to the Force" meant defeat of the dark side of the Force. His position sounds suspiciously like the Sith belief that the Jedi don't use the "full powers of the Force" by rejecting the use of the dark side. The alleged "destroy the Sith" part of the prophecy is also notably absent.

1. The Force was unbalanced due to having too many light-side users, who outnumbered the dark-side users.

The creation of the Jedi order ensured that the Jedi were always at peak strength; the training of Younglings at the temple allowed for quick

Meanwhile, the Sith were hindered by the Rule of Two, which only allowed for two Sith.

Yoda: Always two there are. A master, and an apprentice.

2. The Jedi misinterpreted the prophecy.

Obi-Wan believed that the prophecy fortold the destruction of the Sith.

Obi-wan: With all due respect, Master, is [Anakin] not the Chosen One? Is he not to destroy the Sith and bring balance to the Force?

Yoda, however, cautioned that this was not necessarily true.

Yoda: A prophecy . . . that misread could have been.

As has been speculated by many fans- especially when seeking answers to who Anakin's father is, it is thought that The Force created Anakin as a tool to destroy the Jedi, in order to balance the force. Seeings as there were a limited number of Sith, it's fair to say that the Force was unbalanced at this point. The annihilation of the Sith would have further tipped the scales to the light side, therefore it is inarguable that the Jedi were the ones in the firing line.

As we later see, the commencement of order 66, which murders many trained Jedi, is also aided by Anakin's mass-slaughter of Younglings at the temple. 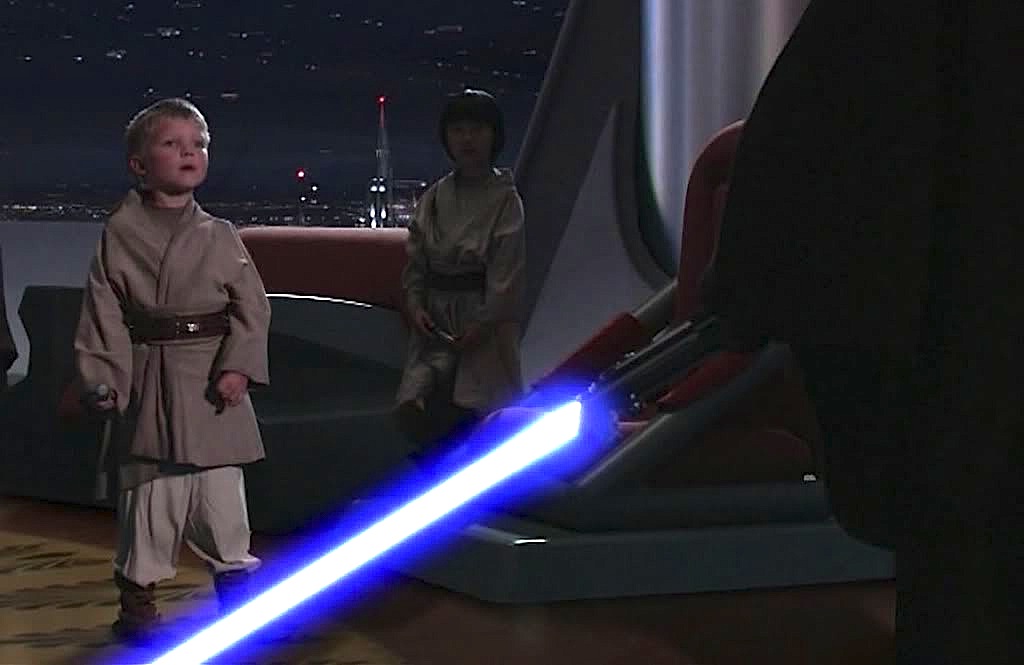 3. Sidious used this knowledge to his advantage.

By way of his careful manipulation of Anakin, Palpatine manages to seduce Anakin to the dark side.

Therefore, in conclusion, it is likely that Palpatine not only knew of the prophecy, but also attempted to help aid Anakin's success for his own means.

Judging by his actions he is almost always using words as a deception to fool others and make himself look better. Such people don't trust words. They would be fools to do so.

The Emperor: [to the Senate] In order to ensure our security and continuing stability, the Republic will be reorganized into the first Galactic Empire, for a safe and secure society which I assure you will last for ten thousand years.

We all know that it is an outright lie.

Darth Vader: Where is Padme? Is she safe? Is she all right?

Darth Sidious: It seems in your anger... you killed her.

Lie tossed to make Anakin feel guilty and to look at himself as on a monster. Thus making him closer to the dark side and easier to manipulate.

Anakin Skywalker: What have I done?

Darth Sidious: You are fulfilling your destiny, Anakin. Become my apprentice. Learn to use the dark side of the Force.

Convincing Anakin that what he has done was right while he himself knew it was wrong. Destiny? Really? So convenient, excuse.

Anakin Skywalker: The Separatists have been taken care of, my master.

The Emperor: It is finished then. You have restored peace and justice to the galaxy.

Again. Words aimed to portray Sidious as a good Emperor bringing together with Anakin peace and justice while in truth he was a tyrant killing all the opposition and taking away more freedom than ever. He has created this war and its sole purpose was for him to rule the world.

So, I think that Sidious was looking at words as nothing more than a tool and expect others to be just as power-hungry as him, including Jedi. I wouldn't be surprised if he thought it was an outright lie meant to fool young Jedi by their masters into thinking that "they are the chosen ones" while it was all about the power and prestige. I don't believe he has considered the prophecy to be something more. Also since he killed his previous master it wouldn't surprise him if Darth Vader would try this on him sooner or later. So, why should he bother? He managed to kill almost all Jedi, Darth Vader seemed still deep down naive, noble and guilty (no ambition, little chances to plot against him, no chances to stand up to the truth). It looked like it was all going in his favor.

Not the answer you're looking for? Browse other questions tagged star-wars jedi sith darth-sidious or ask your own question.

130
Why did the Jedi want to bring balance to the Force?
40
Why Did Anakin Skywalker Believe that Turning to the Dark Side of the Force Would Save Padmé?
92
How was the Chosen One meant to bring balance to the Force?
24
Did Darth Sidious know that Anakin was the product of his Master's experiment?
22
Did Darth Sidious know that Anakin was supposed to be the Chosen One?
19
Did the Rebellion know that the Emperor was the Sith Lord Darth Sidious?
8
Why would the Jedi not go public with their knowledge of the Sith, especially Count Dooku?
11
Why didn't Palpatine wait until after he learned the secret of cheating death before killing his master?
20
Did Palpatine use the Force to convince Anakin to kill Count Dooku?