Novel about character reliving his life

This novel is about a character who jumps back in time to relive his life. It's called “replayer” or something like that but Google didn’t help with the variations I tried.

He’s in his office talking on his phone to his wife, and she is saying “We have to…” and he feels like he has a heart attack, and wakes up in a “very messy room” which he quickly discovers is his young self.

Each time his life ends at the exact same date and time, but each jump is not as far back.

He meets another replayer and they have a love spanning many lifetimes. He (as a rich hermit) first notices her because of a movie she made.

to try and find others, they posted a newpaper ad with the “remember when” theme, listing slogans from the future. A few replied with wrong ideas about what the ad was concerning. One replied with proof of his own, adding Tylonol Scare and Princess Di to the list.

They knew which stocks to but for long-term investment, simply from remembering brand names in the future. Investment consultants were the cover they used when visiting the other guy they had found (who was in an institution for the criminally insane, BTW).

What novel is this?

This is "Replay" by Ken Grimwood.

The novel tells of a 43-year-old man who dies and awakens back in 1963 in his 18-year-old body. He then begins to relive his life with intact memories of the previous 25 years. This happens repeatedly with the man doing different actions in each cycle.

During one subsequent replay, Jeff takes notice of a highly acclaimed film, Starsea, that has become a huge success at the box office in 1974. The film is written and produced by an unknown filmmaker, Pamela Phillips, who has recruited Steven Spielberg to direct and George Lucas, as a special effects supervisor, before the two shot to stardom with their own projects. Because the film did not exist in previous replays, Jeff suspects that Pamela is also experiencing the same phenomenon. He locates her and asks her questions about future films which only a fellow replayer would know, confirming his suspicions. 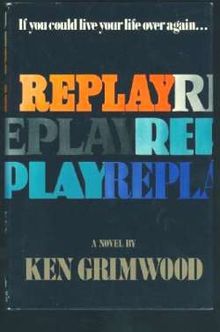 15
Identify a short story wherein a time-travel uses classified ads to search for other time-travelers
9
90s novel, man reincarnates several times at a specific date and time after a heart attack, studies his condition with a woman who also experiences it

41
Novel about an immortal man exposed by world government relates his life through history
10
short story identification - Romance: man communicates telepathically with his future (and past) self meets woman unstuck in time
13
Trying to rediscover a novel about device decryption and SETI
4
Novel about time traveller amongst a group that go back in time to view historical events
6
Book about man reliving his life over and over, under alien control
5
Novel series with ritual cannibalism and flesh essential for life