I have a statue on a fountain near the town hall in Ponyville. Who am I?

Similar to what b_jonas did in his question I have a portrait in the classroom and a bust in the library. Who am I?, I too was wondering about a statue that appear in the MLP:FiM show. 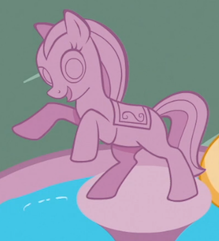 This is a very specific landmark in Ponyville. The statue is located on a fountain near the Town Hall, and is one of the few details in the city layout that seems to be consistent in almost every episode it has appeared in so far.

That said, my question is a little different. I am not directly asking for an in-story reference to the identity of the mare in the statue, a question that I fear has no canon answer so far. Instead, I want to know if there is any out-of-media story to that statue.

To be more specific, I remember having read some time ago somewhere that the specific shape of the saddle in the statue seem to indicate that it could be a reference to a (main?) character in one of the previous generation of the show. That character would have been "redrawn" to match what she would probably look like if she appeared in the new show with the new art style.

I cannot find the source anymore but would like to know if anyone knowing the old generations may have a clue about this, or even if the claim was true in the first place. To me, it would just look like the author put an earth pony as the symbol on a fountain in a city where earth ponies are the most common race, but you may never know.

11
I have a portrait in the classroom and a bust in the library. Who am I?

38
Is “My Little Pony: Friendship is Magic” canon with Star Trek?
5
Was the ponies' knowledge of Night Mare Moon retconned in “Luna Eclipsed”?
3
In the Optimalverse, why must the virtual form of the “emigrants” be a pony?
5
Who are the two yellow mares in the season 5 poster?
2
Is there a superhero who has notably super-strong teeth?
4
When was Starswirl the Bearded alive in relation to the events of the MLP: FIM TV show?
9
Who is the green bearded painter unicorn in S6 E4 “On Your Marks”?
11
I have a portrait in the classroom and a bust in the library. Who am I?
7
Were Celestia and Luna born as alicorn?