Why Does Vader say “No disintegrations…” to Boba Fett in particular?

VADER: ...there will be a substantial reward for the one who finds the Millennium Falcon. You are free to use any methods necessary, but I want them alive. No disintegration.

As he says “No disintegrations…”, he specifically points at Boba Fett. 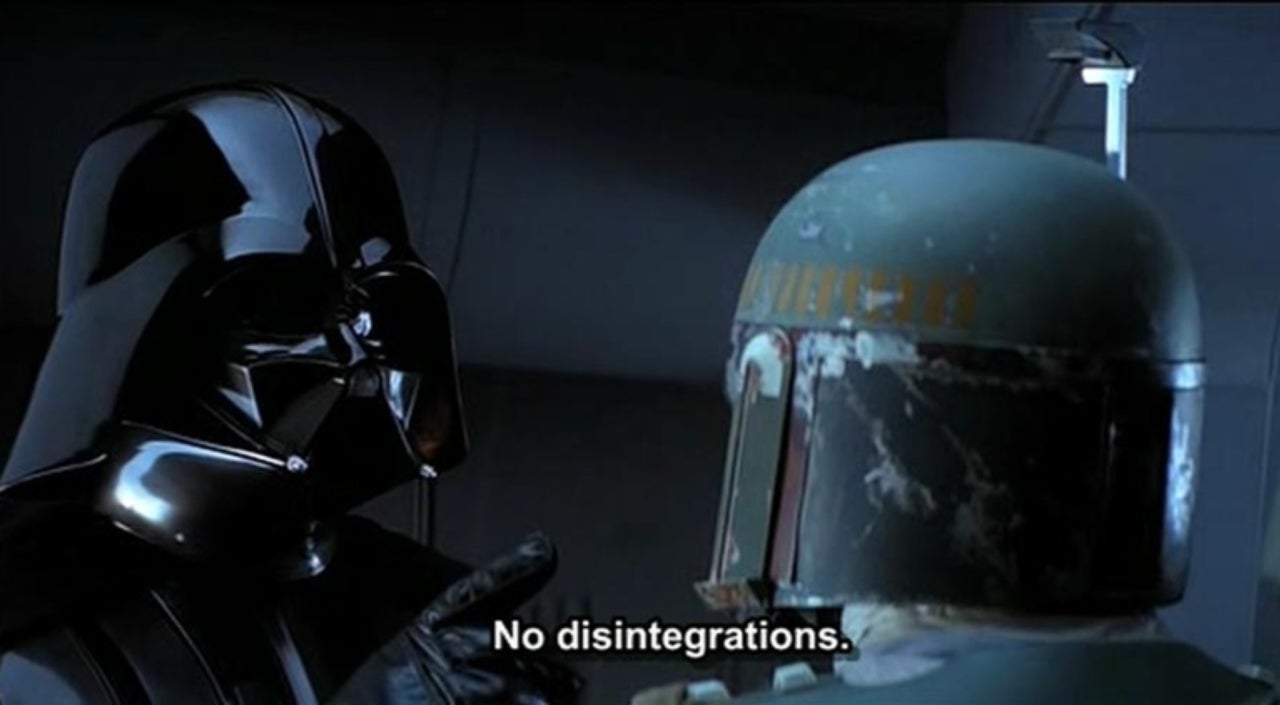 Why does he give this warning to him in particular? Has he used disintegration in the past?

Presumably Boba Fett had previously claimed (or attempted to claim) a 'Dead or Alive' bounty on a person he had killed via disintegration. It's likely that he had no proof other than a visual record (at most) of this, and thus had difficulty collecting or proving to the client (contextually likely to be Vader or the Empire) that the deed had been done.

The Star Wars universe does have many forms of disintegration. They don't feature heavily in the movies or the EU books, but they exist and are referenced in several places.

Vader was simply reiterating to Fett that he needed to deliver Solo alive, and referencing a time when he had difficulty collecting on a bounty to drive the point home.

Edit: Also, that line was subtly used to point out that, even amongst the bounty hunters, Boba Fett in particular is a badass - Vader takes special notice of him and has dealt with him in the past.

UPDATE: As of 2017, this was addressed in Disney canon novel "Star Wars: From A Certain Point of View" (a collection of short stories). In "Added Muscle" story by Paul Dini, we learn that it was a blowback from an earlier episode when Fett crisped some rebel spies and Vader didn't like that fact and refused to pay:

... I picked up trooper buzz that Vader was looking for a couple of runaway droids. Figured I’d collect the bounty and square myself with the headman at the same time. He’s still got a mad on over those rebel spies I crisped on Coruscant. Idiots came at me with ion disruptors. What, they thought I wouldn’t carry a weapon accelerator? Flash, boom, three tiny ash piles. Tried to collect and Lord “No Disintegrations!” refused to pay without bodies. My word’s not good enough, apparently. ...

... Betting the third ran with the droids. I’ll hunt around after I’m done here. Vader may triple the bounty if I bring him the fugitive along with the droids. Yeah, I know, intact corpse, “no disintegrations.”

The clarification was because the "dead" part of "dead or alive" would be faster and easier for Fett, and therefore without specific instructions that the bounty should be alive he'd go for the "dead" option.

"disintegration" was just a figure of speech - Fett would have likely just blown up the Falcon, which would presumably disintegrate the bodies.

I thought it was a joke. Lucas was implying that Boba Fett is famous for his brutality. Having Vader say this was a good way to introduce that fact to the viewer and at the same time have the viewer wonder how violent and capable exactly Fett was, if even Lord Vader had to calm him down.

Vader later does something similar when he stops Fett from immediately firing at Chewbacca when Solo is being frozen. I thought both were hints that Fett was a bit violent even for Vader's standards.

Star Wars Disruptor Weapons are pretty much Disintegrator rays. Remember the Sniper from Jedi Outcast/Academy? That thing literally turns it's targets into heaps of ash.

He probably figured that Boba Fett would be more likely to disintegrate the FALCON. Maybe because of his reputation?

Not the answer you're looking for? Browse other questions tagged star-wars the-empire-strikes-back boba-fett or ask your own question.

28
Is canon Boba Fett deserving of his reputation?

29
How did Vader summon a bunch of bounty hunters quickly, in the middle of nowhere, to hunt for the Millennium Falcon?
54
How did Boba Fett know to hide in the Star Destroyer "Avenger"'s garbage?
49
What type of Captain is Han Solo?
52
Why specifically did Darth Vader choose Han Solo to test the carbonite freezing?
6
Is there any evidence to suggest that Aunt Beru and Uncle Owen were killed by Boba Fett and not the Storm Troopers?
9
Why was the Empire so obsessed with hunting down the Millennium Falcon in “The Empire Strikes Back?”
56
Why is a living creature being frozen in carbonite in “The Mandalorian” so common when it seemed so risky in “The Empire Strikes Back?”
11
Did the terms of the bounty on Han Solo change between “Star Wars” (1977) and “The Empire Strikes Back” (1980)?
10
Whose idea was it originally to capture Solo and use him as a bait to trap Luke?