ID movie where aliens control humans from behind

Aliens were mass controlling every human being by jumping on their back and plugging in to the neck. It looked like this: 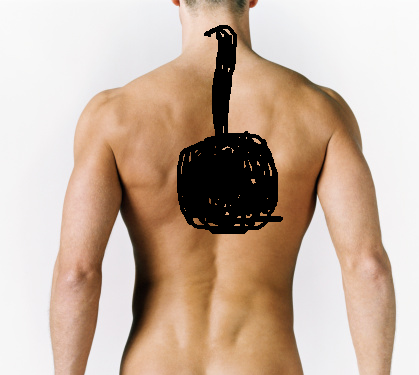 I can't remember anything but one scene, in which US soldiers were in a big hangar with their equipment, and had a video chat with the president. The president asked them to prove they were not being controlled by aliens, and a general said "No problem," started unbuttoning his shirt, and then turned around and the video signal was lost. (They cut off the video on purpose, because they actually were controlled.)

I believe this is the 1994 film adaptation of Robert Heinlein's novel The Puppet Masters. While the president is a character in the movie, it's actually Donald Sutherland's character, a high-level intelligence agent, who teleconferences with the suspected military leaders. He asks a general to remove his shirt, and another military official (played by Yaphet Kotto) backs up his orders:

...and just as the general he's speaking to on the teleconference begins to remove his shirt, the video cuts out:

The series depicts The Hive as an alien species who are covertly invading Earth. They are a parasitic race of small multi-legged spider-like beings that can take control of host bodies, by attaching themselves to the brain.

Not the answer you're looking for? Browse other questions tagged story-identification alien-invasion military-sf or ask your own question.

10
Identify series of books - collecting memories from the dead (robots and humans battle)
25
Looking for identification of SF story where humans are the “ancient evil”
9
Movie: Parents seek missing children. Aliens experimenting on humans
14
Post apocalyptic sci-fi book where Earth is destroyed and humans from the Moon and Mars go on a rescue mission
6
Movie where aliens implant eggs in astronauts and slowly take over them except for one alien, Sabrina, who lives with her host body
15
Students abducted to a world built around a black hole that has a starship they must maintain
10
1980s TV show or movie where kids intercept alien TV broadcast. Aliens are flat puppets. They see a gameshow and news of an Earth visit by the aliens