I was very young when I saw this film on TV in the mid 80's, and I only recollect a small part.

A caveman/iceman comes from the past in to the present for some reason, I think maybe an experiment. Towards the end of the film he is sent back via a huge tunnel of rotating water/ice. It wasn't a comedy.

Sorry, I know it's not much to go on, but the end with the iceman in a tunnel of water is a vivid memory for me. Would love to know the film.

EDIT: I seem to recall that he was killing people, he had escaped from the lab that brought him to the present day.

So I have to suspect you are mixing up a couple of different but related stories?

Iceman, the 1984 film, covers much of the plot you describe. A neanderthal man is found in a block of ice and thaws out because he had eaten flowers that acted as an anti-freeze. He is kept in a huge room in the lab that is made up with neanderthal era flora (and fauna IIRC).

He quickly realizes he is in a sort of prison and begins to find ways out. One day he see's the lab's helicopter fly over the glass roof and believes it is a spirit guide coming to take him away. He eventually escapes, injuring (killing?) one of the lab workers on the way. They take off in the helicopter to find him, and dies when he falls from the helicopter after they approach to pick him up.

The end is him falling through the air, spinning, seen from above and shot against the ice and snow below. Not exactly an ice tunnel, but not entirely impossible to confuse it with one.

And then there's the 6 Million Dollar Man episode, in which Bigfoot lures Austin down what could easily be seen as a tunnel of ice. And back out again. They re-used this (probably expensive) set on many other shows, and it's not entirely impossible a show or movie as you describe.

Others have mentioned The Ugly Little Boy, which I didn't know had been filmed (I read the story as a kid). After watching it on YouTube and scrubbing back and forth, the only thing like that is a sort of metallic cylinder that comes down from above. But there's nothing like someone being inside it, and you only see it for seconds, and the people, a boy and woman, just sort of fade out - super cheesy. It is not at all like your description. I immediately recognized the time machine as one of the small theatres on the second level of the Ontario Science Center. The production values are making my head burn.

There is a Contemporary Caveman trope.

Not many examples in film. However Iceman fits the non comedy and 80's parts of your description.

It's possible that the movie could be Encino Man? 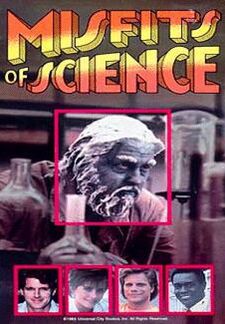 The film is called Misfits of Science and features a very young Courtney Cox. 1985

11
Story Identification: composer brought from the past to the future
9
Trilogy spanning past, present and future
15
Horror film about a man brought out of cryogenic suspension without a soul, around 1990
15
Film about the USA being run by fake videos of the president after his kidnapping
5
Old science fiction film about people being turned into aquatic monsters
15
Movie with a battle at a huge white castle with a long drawbridge?
7
Movie about a rogue / martial artist brought to the present, rides a scooter at some point?
7
Short story about a time traveller (from the past to the present) who is executed for witchcraft when he returns to his time (the past)
12
A novel about people marching against the wind. Possibly in french