There was a book I picked up at a .99 cent store. It was all about aliens. One story was about insects (aliens) that won't quit bugging a guy no matter what he does but they are trying to save him/us from another group of aliens. Another story was about a crashed ship and a military guard that years later they came to take him to their planet because he showed mercy by killing one of them to end the pain. Another was about two rednecks who drink too much but are really aliens. That's about all I can remember at this time. Thanks to all if you try to help.

Possibly Aliens Among Us? 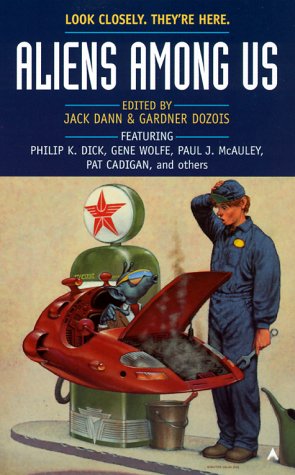 Short summaries for each story in the compilation:
http://www.jpoc.net/books/sf/d/00/dozois-gardner/aliensamongus.html

Dick, Philip K. "Expendable" One man discovers that insects are not really what they seem. They are very smart and they do not want to be discovered as such. When he discovers the truth, the insects decide that they must kill him. The spiders, who are just as clever as the ants, are on man's side and want to help. 7/10

Reed, Robert: "Decency" An alien explorer crashes on Earth and is very badly hurt. Doctors try to help but they cannot patch him up again and they can do nothing to ease his suffering. One soldier takes it upon himself to kill the visitor in order to stop the suffering. When the aliens return in force, they want to meet him and treat him as a hero for his mercy killing. 7/10

Fintushel, Eliot: "Popeye and Pops Watch the Evening World Report" A man discovers that two vagrants, living in a nearby shack, are in fact aliens far from home who want his help to effect their return. 6/10

I don't know about the first or third, but the middle one is titled "Decency." I can't recall the author.

Not the answer you're looking for? Browse other questions tagged story-identification aliens short-stories or ask your own question.