Who cast the Patronus in Harry Potter and the Prisoner of Azkaban?

I'm confused about this sequence – midway through the movie Harry Potter and the Prisoner of Azkaban, Harry is seen with Sirius Black at the lake with a bunch of dementors. He tries casting Expecto Patronum and fails, and then the stag (or doe, I kind of forget at the moment) Patronus comes out and saves him.

Harry claims to have seen his father.

Later on in the movie Harry and Hermione are back at the lake on the opposite side, and this time Harry is the one who casts Expecto Patronum and scares all the dementors away.

Where is the stag in this scene?

I thought Snape was the one doing this, not Harry Potter? Are they both doing it at the same time?

It was Harry casting the Patronus.

You can see the scene here:

Although indeed from the back (from the perspective of the "future Harry") you can't see the shape of the patronus, it's clear that the "past Harry" is looking directly at the source of the light and sees the stag: 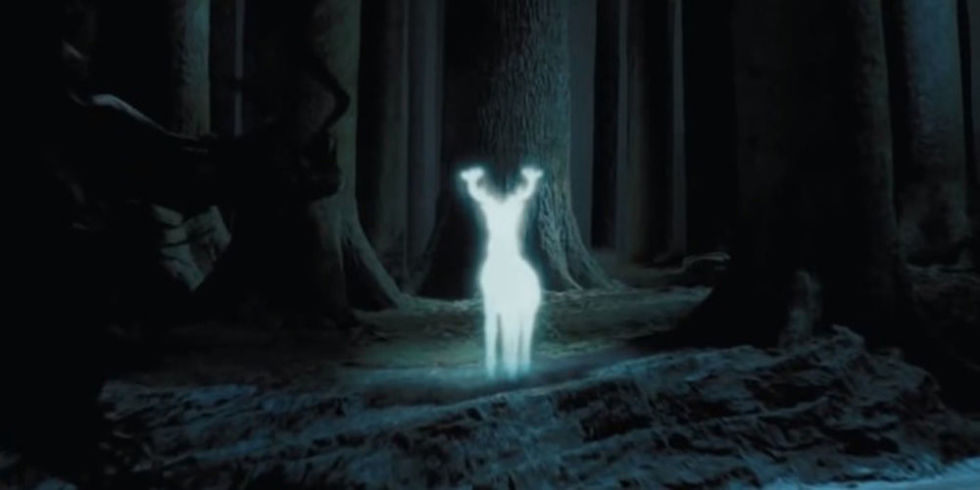 In contrast, Snape's (and Lily's) patronus was a doe:

It was Harry Potter all along

Although you've asked specifically about the movie, in this particular case, the story is not too different from the books, so I will add some additional details from there to support Yasskier's answer/

The first time around
Harry and Sirius Black chase Lupin into the woods and get side-tracked by a bunch of hooded thugs looking to cause trouble.

Sirius is overcome due to his immense internal struggle, and Harry must step up and take these fools down on his own. He fails.

However, juuuuust before Harry passes out, he sees a figure on the other side of the lake cast a stag shaped Patronus which ultimately saves them.

With every ounce of strength he could muster, Harry raised his head a few inches and saw an animal amid the light, galloping away across the lake. . . . Eyes blurred with sweat, Harry tried to make out what it was. . . . It was as bright as a unicorn. . . . Fighting to stay conscious, Harry watched it canter to a halt as it reached the opposite shore. For a moment, Harry saw, by its brightness, somebody welcoming it back . . . raising his hand to pat it . . . someone who looked strangely familiar . . . but it couldn’t be . . .
-Harry Potter and the Prisoner of Azkaban, Chapter Twenty (The Dementor's Kiss).

Harry explains that the "figure" he saw was none other than his own pops, big daddy James Potter.

The Second time around
Hermione Granger decides that she no longer wants to selfishly hide her time-turner to use for her usual bookwormy antics, and decides she wants to step into the big game of temporal paradoxes. Harry's like "bro, I'm in bro!" and joins her.

They do some fun stuff, which ultimately leads them to the same lake in which Harry and Sirius passed out the first time around. Albeit, on the exact opposite side (where Harry first saw the Jimmy-shaped person cast a stag Patronus) - coincidence?. Turns out he just wants to get a glimpse of poppa performing his bad-ass Patronus.

Hermione gets all philosophical and reminds Harry that Jimbo ain't comin'... He dead[spoiler alert!]!

“There’s only one thing it could have been, to make the dementors go,” said Harry. “A real Patronus. A powerful one.” “But who conjured it?”

“Who did you think it was?”

“I think —” Harry swallowed, knowing how strange this was going to sound. “I think it was my dad.”

Harry glanced up at Hermione and saw that her mouth was fully open now. She was gazing at him with a mixture of alarm and pity.

Harry then has a realisation that it was him who had performed the Patronus in the first placeooooooh!. And realises that he can so too do it, because he's already done it!

But no one came. Harry raised his head to look at the circle of dementors across the lake. One of them was lowering its hood. It was time for the rescuer to appear — but no one was coming to help this time —

And then it hit him — he understood. He hadn’t seen his father — he had seen himself —

Harry flung himself out from behind the bush and pulled out his wand.

Bam! one stag Patronus later, and the hooded thugs run off to dement other poor unsuspecting victims.

The Patronus turned. It was cantering back toward Harry across the still surface of the water. It wasn’t a horse. It wasn’t a unicorn, either. It was a stag. It was shining brightly as the moon above . . . it was coming back to him. . . .
-Harry Potter and the Prisoner of Azkaban, Chapter Twenty-One (Hermione's Secret).

You have to wait a little while longer to get Snape's full story; all the way up until The Deathly Hallows. But this is where Snape explains his unrequited love for Lily Potter.

“I have spied for you and lied for you, put myself in mortal danger for you. Everything was supposed to be to keep Lily Potter’s son safe. Now you tell me you have been raising him like a pig for slaughter —”

“But this is touching, Severus,” said Dumbledore seriously. “Have you grown to care for the boy, after all?”

“For him?” shouted Snape. “Expecto Patronum!”

From the tip of his wand burst the silver doe: She landed on the office floor, bounded once across the office, and soared out of the window. Dumbledore watched her fly away, and as her silvery glow faded he turned back to Snape, and his eyes were full of tears.

“After all this time?”

Huh? So-what if he conjured up a doe patronus?
... As explained here:
In which situations does a wizard's patronus change due to love?

A wizard's patronus oft-times matches that of their loved one. This is because a wizard's Patronus matches their personality, as explained here:

What does a person's patronus imply about their personality?

You might be confusing the scene in The Prisoner of Azkaban with the scene from the Deathly Hallows where Harry follows a Doe Patronus that leads him to the sword of Griffindor in the lake, which through Snape's memories it is revealed that he did indeed cast it.

28
How is Harry able to cast the Patronus to save himself & Sirius?
14
What does a person's patronus imply about their personality?
14
In which situations does a wizard's patronus change due to love?

3
Why did Harry hear his parents when influenced by the Dementors?
16
Why doesn't Lupin summon a patronus on the train?
4
Would Expecto Patronum work on Inferi?
11
What are all possible uses for Expecto Patronum?
5
Why does Hermione pass out first?
11
How did the Ministry know that Harry cast a patronus in front of a muggle? And why didn't they also know that it was in front of a dementor?
1
In the Cursed Child, how did Snape get his soul sucked out if he had a Patronus protecting him?
3
Is there any specific wand movement for the Patronus Charm?