So... I know the novel was long, in fact I think it was broke into two books in later printings although I'm not sure about that. I read it in 1995 to 1998, not sure of the exact year.

What I remember of the plot is that the main character has amnesia and is hunting something, he also spends a lot of time fighting "himself", but he knows that he is the real him because he is the one that can perform this one spell where he blows in his hand and then throws it. In one scene it comes back to him covered either in dust or rubble and shows him his own face. I also seem to remember that there was either world or plane hopping involved.

Actually, the answer was Clive Barkers Imagica, but thanks for the other answers. 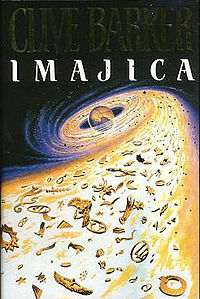 From the Wikipedia summary:

The Earth is actually just one part of 5 connected worlds or Dominions, called the Imajica. Overseeing all of the dominions is the Unbeheld, Hapexamendios (God). However, Earth became separated from the other four worlds long ago. This explains both the appearance of extraordinary phenomena on Earth as well as the lack of understanding of magic and acceptance of the extraordinary as commonplace (as it is in the other four worlds). The void that separates Earth from her sister worlds is called the "In Ovo".

Great magic users called Maestros have attempted through the ages to reconcile the Earth with the remaining Imajica, including Christ. This Reconciliation can only happen once every 200 years. All previous attempts failed; the most recent resulted in the horrific death or madness of those involved. A secret society known as the Tabula Rasa formed after this failure; its directive is to prevent the use of magic on the Earth, motivated by the fear that such a disaster may occur again. At the present time, the four reconciled dominions are ruled by the Autarch, who lives in the great city of Yzordderrex in the Second Dominion.

The novel opens with a man, Charlie Estabrook, hiring the mysterious assassin Pie'oh'pah to murder his estranged wife, Judith. Pie heads to New York and makes an attempt on Judith's life, but fails. Estabrook, having come to regret hiring the assassin to kill Judith, then contacts Judith's former lover, an artist named John Furie Zacharias also known as "Gentle", and asks Gentle to protect her. Later, Gentle comes upon Judith just as Pie is making a second attempt on her life. Gentle chases Pie away, but Pie, who has the ability to change his exterior, later disguises himself as Judith and comes to Gentle's apartment with the intent of having sex with him. During their tryst, Judith calls, alerting Gentle to the fact that he is in fact coupling with the shape-shifting assassin. Gentle is horrified and demands that Pie leave.

Pie and Gentle arrive in the Fourth Dominion and head to the nearby village of Vanaeph, where the Autarch is coming to investigate rumours of rebellion. They soon get into a conflict with some locals and are helped by a man named Tick Raw. Later, Gentle is confronted by a creature known as a 'Nullianac', and manages to kill it using a protective spell called a 'pneuma'. Pie and Gentle then head to the mountains to find a way of breaking into the Third Dominion.

Gentle returns to the palace in Yzordderrex where he's reunited with Judith. The entire palace including the Pivot starts to collapse and while they are able to escape, Quaisoir is killed. Gentle and Judith go to Peccable's house and then return to Earth. Gentle decides to return to the house on Gamut Street where he attempted reconciliation 200 years before and some of the memories from that time return to his head. His returned memories include those of conversations with Joshua Godolphin and the ancestors of those in the Tabula Rasa, as well as a young man, Lucius Cobbitt. Also remembered is the moments after the reconciliation failed and the horror brought upon everyone when Sartori tampered with the ceremony and creatures from the in Ovo were released. Gentle has a vision of those killed attacking him, a sort of 'final rite of passage' as his memories return. A creature known as Little Ease sent by Sartori invades Gentle's mind and tells him that Sartori will use him to prevent the reconciliation from occurring by any way possible. When Gentle leaves the house, Little Ease releases all of Gentle's memories from the past 200 years into his mind, harming him tremendously. Gentle, scarred from the event later appears where some homeless people are living and is almost killed by one of them until he uses a pneuma to defend himself. He befriends Monday, a fellow artist. Judith meanwhile sleeps with Sartori, thinking that he is Gentle.

After being reunited with old colleagues like Klein, Clem and Oscar, Judith becomes obsessed with freeing Celestine from her prison below Roxborough Tower. She and Oscar eventually head to Roxborough Tower after all of the Tabula Rasa end up being killed. When they split up, Oscar ends up getting attacked by Dowd (still alive, with pieces from the Pivot shoved into his body), who slices him up much in the same way that Oscar did to him near the start of the book. Judith arrives just as Oscar dies. After speaking with Dowd, Judith returns to the basement of the tower and frees Celestine, who then fights and defeats Dowd. Celestine tells Judith that she wants to see Maestro Sartori. Clem one night while helping the homeless finds Gentle and helps him get his senses back. Gentle heads off with him, and Monday tags along. Sartori meanwhile reveals to Judith (who still thinks he's Gentle) that he has impregnated her when she tries to get him to see Celestine. Judith tells him to go see Celestine. The real Gentle arrives shortly afterwards with Clem and Monday, and they head to Roxborough Tower, where Sartori has already met Celestine, who reveals that he was the child she bore when she was raped by Hapexamendios hundreds of years before. Gentle and Sartori do battle while the others help Celestine out of the tower.

This sounds somewhat like The Chronicles of Amber series.

This sounds kind of like the Earthsea Trilogy: http://en.wikipedia.org/wiki/Earthsea

5
Find fantasy novel involving fairies, magic and tattoos that harm humans
4
Identify a young adult novel involving gates or bridges and a troubled boy
10
What science fiction novel was about a murder mystery, involving androids, psychics, and auras?
10
Fantasy novel ID: Universe one small strip of land
7
Fantasy book - Woman from our world winds up in a fantasy world, meets chosen one, beats him in singing contest and wins cup
13
80s or 90s Fantasy novel, part of series. Castle talks to wizard, 2 headed dragon fights itself
4
90s (or earlier) book/novel: daily memory loss and a device called the Memory