What was up with the looks being exchanged with Count Dooku and Anakin?

During the Attack of the Clones light saber battle between Anakin and Count Dooku there was a scene where the focus was on their two faces and the looks they were giving each other. It was weird. It had one of those "I am your father" vibes and was seemingly meant to display some sort of emotional tension. However, then Anakin has his arm chopped off and this tension is dropped. Any script direction or novelization clarification or elaboration on this scene?

These long face shots were deliberate, albeit not for the reasons you might think. Due to Sir Christopher's advancing age (79 at the time of filming) and relative infirmity it was next to impossible for him to be involved in even short fight sequences. Filming him in close-up, and then having his face digitally mapped to a stunt double for longer shots was the solution the makers found to get around this.

And another decision made before production began was to have a “digital double” of Christopher Lee. Though Lee boasts he holds the record for most sword fights in front of the camera than any other actor, the legend was 79 at the time of shooting, so a majority of his shots in the sequence were done by a stunt double. Then when the double's face could be revealed on camera, it was replaced digitally by Lee's face.

Business Insider Article: "Christopher Lee did his incredible lightsaber fight against Yoda in 'Star Wars' when he was 79" 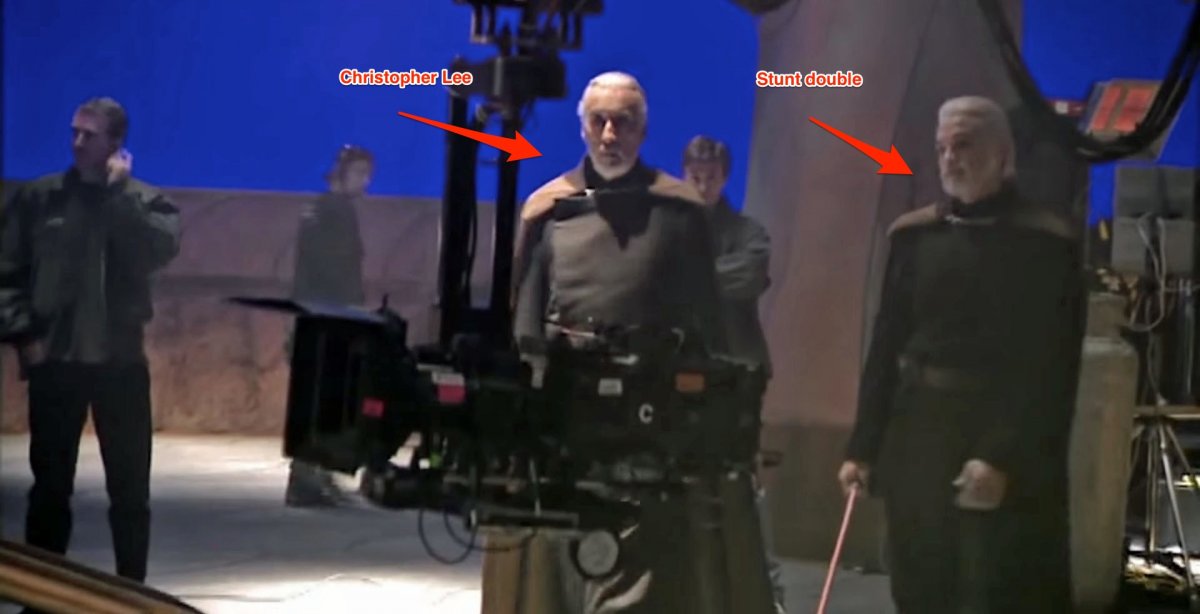 I think you're reading too much into "looking concentrated, because George Lucas thinks that 'looking like you're on the loo' is enough of a directorial advice".

R.A. Salvatore's novelization indicates there was no hidden subtext there:

But Dooku retracted impossibly fast, and Anakin's down-cutting green blade hit nothing but air. Dooku stabbed straight ahead, intercepting the blue blade. The Count's hand worked up inside and over, then back around with a sudden twist, launching the blue lightsaber from Anakin's grasp.

... {{ previous paragraph discusses Anakin attacking with two blades, which precedes the scene you linked to - your scene starts after he already only has 1 blade }} ... next paragraph is the only one pertaining to the scene itself:

Dooku went on the offensive immediately, driving the surprised and off-balance Anakin back. Anakin fought hard to regain his fighting posture, but Dooku was relentless, thrusting repeatedly, keeping the young Padawan stumbling backward. And then he stopped, suddenly, and almost on reflex, Anakin turned back on him, roaring and slashing hard.

... {{ the next paragraph is slashing off of Anakin's hand, which is the end of the scene }}

9
Why couldn't the Clone Gunship shoot down Count Dooku as he was escaping Geonosis?
14
Why doesn't Count Dooku finish Anakin off?
16
Why did Yoda say nothing after Padme hugs Anakin after the fight with Dooku?
39
Why did Anakin and Dooku duel in the dark?
3
Did Anakin Skywalker know that Count Dooku is Qui-Gon Jinn's master?
6
Why would senator Amidala suspect Count Dooku was behind the bombing?
1
Why didn't Kaminoians inform Obi-Wan that Count Dooku took over with ordering the clone army?
3
Why did Count Dooku stop being a Jedi?