Title of a book I read in the 1980s, human scientists transformed into aliens in a world-zoo

I am looking for the title and author of a book I read in the early 1980s. It was about a team of scientists who find a mysterious abandoned alien gateway and it's their task to find out what's on the other side. They go through the gateway, and each member is transformed into a different type of alien. These aliens are kept on a world that is like a huge zoo. The world is separated into huge octogons, and a different species is housed in each octogon. I don't remember much about the different alien species, but one is a species in which the females become incapacitated during their menstrual cycles. Over the course of the book, the human/alien in that world invents birth control so that the females revolt and gain power. I don't remember how it ends, other than the scientists find a way to communicate with each other and escape. Thank you so much for any help with this!!

This is Twilight at the Well of Souls, the fifth book in the Well World series by Jack Chalker.

“When you go into desperate heat every six weeks, there’s not much you can do.” “Uh huh,” the computer agreed. “And so what do we have to introduce to produce a revolution the way we want it—on schedule, on time, just waiting for the load of new Entries?”

“You’d have to kill off all the males,” she responded, then stopped. “No. That wouldn’t work. That would only put us all in unending heat.”

“What you need,” Obie continued, “is something that will keep the Time from coming. You need the one thing a race that reproduces so slowly it still has females in heat would never consider, not even the most intellectual of them. You need a birth-control device—or, rather, a birth-control chemical, something that would fool your body into thinking it wasn’t the Time.” 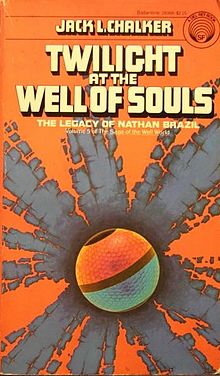 10
Title of 2 books about 2 different alien species who are fighting for earth
7
A book about two generation ships carrying the rest of the human race to another planet
13
novel identification: alien scientists must save their civilization from future destruction
15
1980s story about descendants of NASA scientist living in underground cities after solar flares destroyed civilisations
5
2000s SF series about exploration and escaping from dangers, including a humanoid bird species
9
Science Fiction Short Story Regarding First Contact with Alien Race that Values Emotions
10
Book: Two alien species living on the same planet, depending on each other but not aware of each other