Discrepancy in uniforms around the dinner table: ST:TOS “Space Seed”

In the Star Trek TOS episode "Space Seed", Khan gets a "welcome to our century" dinner. Kirk, Spock, McCoy, and Scott turn out "formal dress" uniform, where everyone else appears to be in their regular duty uniforms.

Does this have an in-universe explanation, or is it a production economy we're not supposed to notice (dress uniforms only prepared for the core cast). 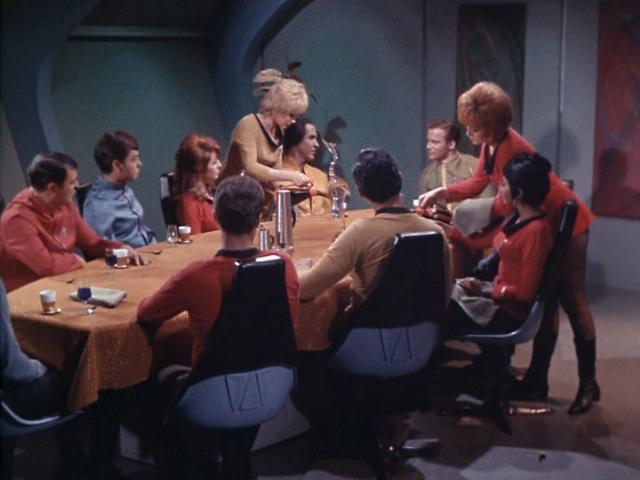 At startrek.com, there is an article "The Evolution of 'Space Seed,' Part 5" which goes into great detail about the costuming for Ricardo Montalban in that episode.

Star Trek: The Wrath of Khan’s director and writer, Nicholas Meyer, proffers a thesis that art thrives on limitations: that time, budgetary and technological issues, and even censorship may spur a kind of creativity in artists to find ways around these problems and yet still tell their stories or create their designs. Perhaps there is no better example of this in popular culture than Star Trek itself. Filming for “Space Seed” was set to begin on December 15, 1966, based on the 59 7/8 page script written by Gene Coon and Gene Roddenberry and from the inventive premise by Carey Wilber. Before the cameras could roll on the planned 120 scenes, however, several key factors needed to be in place. One of these was the design and creation of the costumes. Interestingly, the character of Khan would have more wardrobe changes than any other male guest star on the original Star Trek, yet the last-minute casting of the superb Ricardo Montalban meant that the costume designers had even more time limitations than normal to make more costumes than usual!

The costume designer, William Ware Theiss, noted “1) I am limited by fabrics and materials. 2) I must try to find design devices which spell out the future for us here and now and 3) I have the same problems of expediency – time and money – that everyone else in the Star Trek company has.”

The article says that Montalban went through 5 costume changes, which is a pretty large number for a single Star Trek episode. Montalban's casting happened in Later November or early December 1966, and filming began on December 15, 1966, so time was very limited.

So although it doesn't address your question directly, there is a strong sense that the budget and time were quite limited for anyone's costumes except Ricardo Montalban - lending support to your supposition that "it's a production economy we're not supposed to notice".

Not the answer you're looking for? Browse other questions tagged star-trek star-trek-tos costume or ask your own question.

6
In Space Seed was it a mistake when the bridge could communicate with engineering even though all communications were jammed?
10
Did Khan disapprove of Spock in an early draft of “Space Seed”?
23
Can anyone identify the upper body garment Khan Noonien Singh is wearing in the Star Trek episode “Space Seed”?
5
In ST:TOS “Assignment: Earth”, was the NASA stock footage fixed in the remastering?
10
Where did the field uniforms come from that the SG teams wear?
5
How far did the Botany Bay travel in “Space Seed”, and how?
4
How old was Peter Preston when he entered Starfleet Academy?
7
Why were all the basic imperial uniforms starting in The Empire Strikes Back gray?
33
What was the gaudily coloured equipment on the Enterprise's corridor walls in ST:TOS?