Was the final Picard-Shinzon confrontation in Nemesis inspired by the climatic fight in Excalibur (1981)?

In Nemesis, Shinzon dies when he attacks Picard with a knife, and Picard pulls loose a strut or some other object and impales Shinzon. Shinzon forces himself down the shaft of the "spear", and grasps at Picard's throat with his last breath. Picard-Shinzon showdown at 2:17 mark.

In the 1981 King Arthur film Excalibur, Mordred impales his father with a spear. Arthur, mortally wounded, claws his way down the spear, to drive Excalibur into Mordred's chest, slaying him. Arthur slays Mordred.

Though not identical, the two scenes have many similarities. I've long wondered if there was an intentional nod to the earlier film. Is there any official information to confirm this?

Yes, but not just to the 1981 movie. This is an example of the literary device Pulling Yourself Down The Spear. (TVTropes link!) It's somewhat common now, but originated in Le Morte d'Arthur and as Valorum said, was popularized by several famous paintings of Mordred and King Arthur. 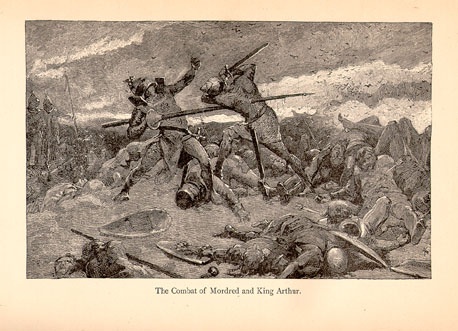 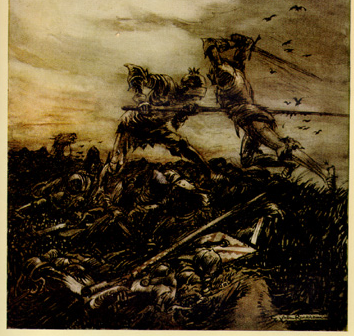 Not the answer you're looking for? Browse other questions tagged star-trek behind-the-scenes inspiration or ask your own question.

13
In the last fight scene of Star Trek: Nemesis, how did Shinzon detach his Warbird from the Enterprise after their collision?
7
Was 'The Thing' from the Bromeliad Trilogy inspired by the Connection Machine?
4
In Star Trek : Nemesis, why was B4 disassembled and why was Picard attacked while on the planet?
15
If Shinzon were to replace Picard how is the age difference explained?
7
Was the idea of Batman inspired by vampires?
4
Was the first pilot episode of the original Star Trek inspired by Bradbury's Martian Chronicles?
26
Was Captain Picard named after the Piccard twins?
11
Was Space Gary cut from the final movie?
6
Was the Flame and the Void inspired by military techniques used in the Vietnam War?
8
Was Jean-Luc Picard inspired by Hornblower?