What really happened to Batman at the end of The Killing Joke?

I've just finished reading Batman: The Killing Joke and I have a question about the story.

Did Batman really die at the end? In the story in the end of the comic?

I'm from Brazil and I bought the issue in English at Amazon. In the original issue, after the story, there is a different story about a guy that tells us how he will kill Batman and I didn't understand that part.

Another question. My friend bought the same comic here in Brazil, but in Portuguese, and in his version there isn't this story. At the end of the Killing Joke the comic ends.

Batman does not die at the end of The Killing Joke.

The Killing Joke ends with an iconic final page, on which

Batman restrains the the Joker in the rain, while the two are overcome with laughter. The sirens of approaching police cars gradually drown out their laughter as our viewpoint shifts to the rain falling onto the sodden ground. 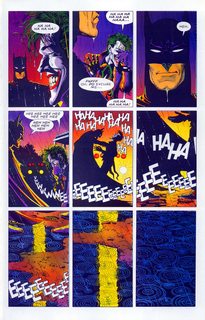 There is some debate over this scene - some people, including Grant Morrison, actually believe that Batman is about to kill the Joker, by choking him to death, in this final scene. However, Alan Moore's notes on the script indicate that this is not the case: 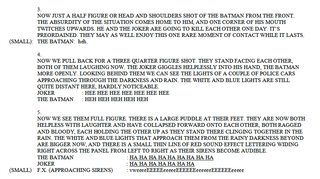 Moore clearly states that, although Batman becomes aware that he and the Joker will kill each other one day, the two are not fighting at this moment - they're merely leaning on each other and laughing.

The story about a man who wants to kill Batman was a bonus added to the 2008 "Deluxe Edition" of The Killing Joke. It is not a part of the original story, and it doesn't imply anything else that happened in the story. As far as I know, the character in that story never succeeded in killing Batman :)

I think Batman kills the Joker at the end ... He laughs along with the Joker because he realizes that both him and the Joker are in the exact same situation described in the joke, Batman is the first lunatic that crosses and encourages the other to cross, but will certainly turn off the light when the other is crossing. The last two vignettes are symbolic and reflect what I described above, the penultimate vignette shows the light guiding the other and the last one you'll see that is turned off.

Another sign that the Joker is dead is that there are no more signs of laughter in the last three vignettes, but the siren is still there.

Not the answer you're looking for? Browse other questions tagged dc batman the-killing-joke or ask your own question.

16
In comics does Batman have a rule against killing?
9
Why didn't the Joker follow through with his plan at the dinner party?
10
Should I start reading batman from the start or from the new 52?
2
What Batman story mentioned Batman and Bat Boy?
6
In Knightfall, how did Bane discover Batman's identity?
17
Looking for a Batman Comic where Batman had real wings
2
Is the Batman who Laughs storyline in "Dark Nights Metal" part of its own story?