Saw this in the late eighties.
Boy escapes the grasp of an all female command and having been misled to believe a holocaust type scenario joins with a girl.

They work their way through a series of rooms. The final scene, I remember, involves the boy slicing the wall with a knife to reveal sunlight and sand (beach or desert).

It was a false lie in a totalitarian underground cult. I believe it was subtitled thus foreign. 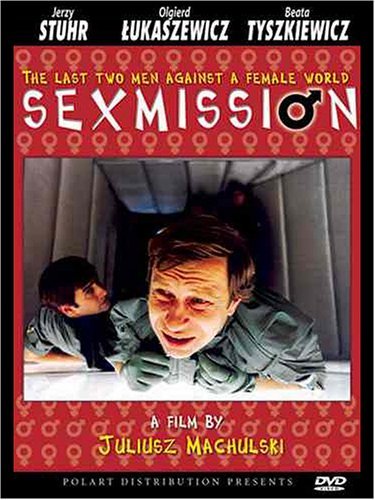 Two male volunteers are placed in hibernation, but the planned 2 years is extended to over 40, when World War 3 erupts. Mass usage of biological weapons wipes male population; surviving women live underground under the rule of "League of Women" - a pastiche of Party (with capital "P") that keeps demonizing the (now extinct) men as monster.

When Maks and Albert are recovered, the League decides to turn them into women. Trying to avoid this fate, with help from one of researchers they decide to go to the surface, knowing that that the radiation would kill them in less than two weeks. But exploring the wasteland they quickly find a "forcefield" that Maks attacks with a knife and tears through easily: They find themselves in a beautiful land - the wasteland is just a painting surrounding the periscope, providing false sense of danger to the inhabitants of the underground complex.