Did Obi-Wan Kenobi ever drink alcohol?

On this question, someone in the comments pointed out that while Obi-Wan Kenobi orders drinks at bars a couple times throughout the movies, there appears to be a lack of evidence that those drinks are alcoholic at all.

Can it be confirmed whether or not Obi-Wan Kenobi has had an alcoholic beverage?

You may give an answer from Disney Canon or Legends; please specify which in your answer.

In Dex's diner (in Attack of the Clones) Obi-Wan drinks a beverage called "Jawa Juice", identified in the film's official novelisation as "Ardees".

With great effort, Dexter managed to squeeze himself into the seat opposite Obi-Wan. The waitress droid was back by then, setting two steaming mugs of ardees in front of the old friends.

So we geared up, rolled out, and there we were in the heart of Mos Eisley, getting crispy beneath all those layers of armor and this giant black bodysock, and quite frankly craving a thirst quencher, and I don’t mean the kind that actually quenches thirst. I mean the kind that dehydrates, in fact. A beverage, specifically one that frizzles, to be precise. Jawa juice, in case I wasn’t clear. I wanted a damn drink.

The fully canon Star Wars: Absolutely Everything You Need to Know factbook also confirms that ardees contains fermented grains, indicating that it's an alcoholic beverage. 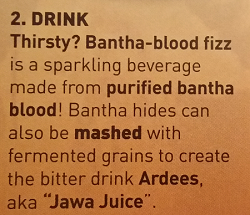 2. DRINK
Thirsty? Bantha-blood fizz
is a sparkling beverage
made from purified bantha
blood! Bantha hides can
also be mashed with
fermented grains to create
the bitter drink Ardees,
aka "Jawa Juice".

Not the answer you're looking for? Browse other questions tagged star-wars star-wars-legends obi-wan-kenobi or ask your own question.

-4
Was Obi-Wan Kenobi an alcoholic?