Are there any adaptations of War of the Worlds that correctly depict the unusual locomotive method of the Martian tripods?

I have assumed that I don't need to spoiler any of this, given the publication date.

In HG Wells' "The War of the Worlds", the way the Martian tripods move is first described in this quote:

"Can you imagine a milking stool tilted and bowled violently along the ground? That was the impression those instant flashes gave. But instead of a milking stool imagine it a great body of machinery on a tripod stand."

I have seen a number of depictions of the Martian tripods over the years (I live near Woking, so possibly more often than most, especially this year) but never one that actually seems to have taken this description on board. Has anyone imagined (and depicted the tripods as moving like) a milking stool tilted and bowled violently along the ground?

The only reference I could find to the walking mode of tripods on this site (The first walkers?) seems to have assumed they did walk in the traditional way.

Disclaimer: I haven't heard the famous radio play in full, which may describe them this way, but I'd prefer a visual representation. 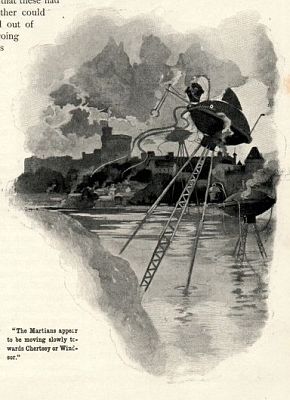 But it should be mentioned that Wells was rather inconsistent in his descriptions of the Martian war-machines. In book I, chapter 12:

When, half suffocated, I raised my head above water, the Martian’s hood pointed at the batteries that were still firing across the river, and as it advanced it swung loose what must have been the generator of the Heat-Ray. In another moment it was on the bank, and in a stride wading halfway across. The knees of its foremost legs bent at the farther bank, and in another moment it had raised itself to its full height again, close to the village of Shepperton.

It's possible they have more than one means of travel. The stiff-legged milking-stool roll for moving quickly across level ground, and an articulated walking mode for negotiating obstacles such as rivers and rough/hilly land.

I'd like to mention that in that chapter where he describes the odd movement of the machines, that that was not their actual way of moving, that description was just the impression he got from the machine as it was only momentarily shown through the lightning flashes. They probably moved one leg at a time as they walked or moved like a man on crotches. Two front legs stepped at the same time, then the middle leg.

The fighting-machines were coordinated and animated to an extraordinary pitch...

I can't imagine how intelligent martians could build a machine that moves like a milking stool bowling along the ground. seems very clumsy and not very animated and coordinated at all.

The BBC adaptation aimed to be as true to the book as possible, time period and visuals 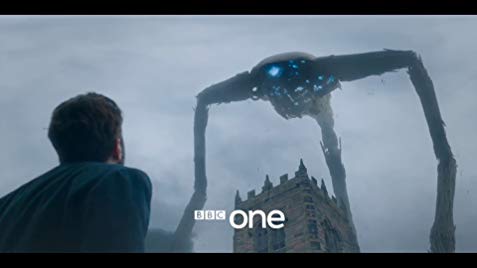 Not the answer you're looking for? Browse other questions tagged history-of war-of-the-worlds h.g.wells or ask your own question.

5
In War of the Worlds, is the Tripod that grabs Rachel really the same Tripod as in the beginning?
9
Why do the Martian aggressors in Robinson Crusoe on Mars look the same as those in War of the Worlds?
6
What does "I realised with horror that I'd seen this awful thing before"refer to in Jeff Wayne's War of the Worlds?
11
Was there any SciFi/Horror movie that had better income/budget ratio than "The Blair Witch Project"?
31
What was the first published SF story to use the surprise twist "and these characters were the original Adam and Eve!" at the end?
12
Weapons that glow when the enemy is near. Are there precedents before Tolkien?
20
Are there any clear predecessors to the idea from Harry Potter of wands with special cores?
24
Is there a scene in the “War of the Worlds” movie depicting a man with a suitcase full of money?
3
How tall are the tripods in Jeff Wayne's The War Of The Worlds?