Looking for a fantasy series with ferrets, elves and a foul mouthed dwarf

I remember reading a fantasy novel back in the early 2000s (definitely adult fantasy). I was probably far too young to read it and understand everything, hence me wanting to revisit it. I can't for the life of me remember the name or the author but I do remember some of the details.

The first character you encounter is a young boy who lives in one of the kingdoms/cities. His family has ferrets for some reason(I think they were rat catchers?). The story then follows him to a different city/kingdom (he joins a party of... adventurers?)

One of the other characters is an older female protagonist that had some relation/knowledge of the aforementioned elven king.

A band of dwarves, one particular one was challenged to a duel because he called one noble (and this one I remember quite clearly):

When this was revealed during a trial the younger female protagonist burst out laughing.

I think the book was quite explicit when it came to describing the violence (thinking back I'm reminded of Gemmell / Martin).

I think the book cover had a picture of a red dragon hovering above a city.

So pretty much the only details that are very clear in my head is the ferret-boy, the foul mouthed dwarf that got challenged to trial by combat (someone fought for him). There was definitely some kind of magic but I can't remember the exact mechanics.

A Time of War by Katharine Kerr from the Deverry series. 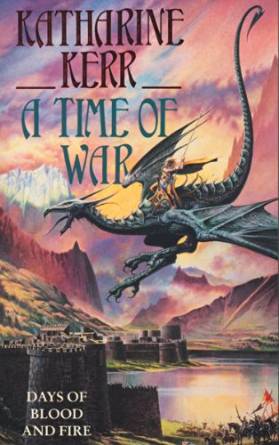 The dragon on the cover isn't red, but the scene is an overall reddish colour.

The young boy is Jahdo and he is indeed from a family who use ferrets to hunt rats:

To earn their food, clothing, and other necessities, the Ratters, as their family came to be known, also took their ferrets round from house to house all over town. Wearing little muzzles to keep them from making kills, the ferrets chased the vermin out through holes in the walls, where the family caught the rats in wicker cages and drowned them and their fleas both in the lake - not the most pleasant of jobs, but growing up with it made it tolerable.

As for the the, erm, more distinctive quotes the foul mouthed dwarf is Otho and the quotes are:

‘You impacted pusboil from the hind-end of a leprous mule!’ Otho snapped.
‘Don’t you insult me, you stub-legged excuse for a man.’
‘Very well, I retract that. You’re a running sore on a leprous she-mule’s c**t.’

and at the trial:

‘And what did he call you, Lord Matyc,’ Cadmar said, ‘that makes you feel your honour’s at stake here?’
Matyc hesitated, his face turning just the slightest bit pale.
‘Unless you give out with the insult, I can hardly judge it, can I now?’
‘Very well, Your Grace. He called me a running sore on a leprous she-mule’s c**t.’