What is the significance of the different styles of, and emblems on, Klingon baldrics? 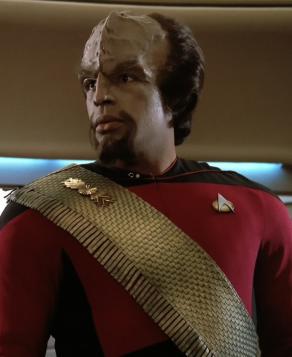 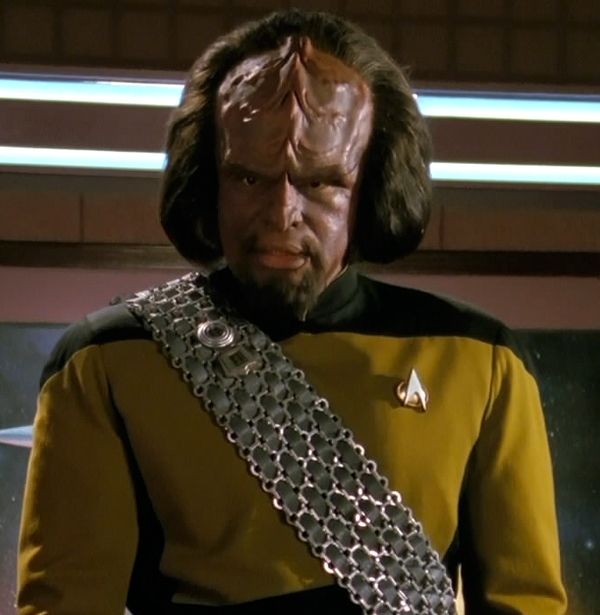 Here, the difference is quite apparent. The material and construction of the baldric is entirely different, as well as the emblems. A search for more images turns up at least one or two more variants - perhaps there are more. Most of the other variants are more subtle though and usually involve just changing the emblems on the baldric.

The baldric is a common piece of Klingon attire, and presumably Worf wears it to honor his heritage. Therefore, I think it is also a fair presumption that any changes he makes regarding his baldric would reflect something of significance of Klingon culture.

Has there ever been an in-universe explanation for these changes, or the significance of the differing emblems and styles of the Klingon baldrics?

The emblems on the baldrics themselves are meant to signify that the wearer is a member of a particular family or "house". Out-of-universe this is a bit of a retcon as Worf's emblem changed from Season 1 to Season 2 of TNG, and only very late in DS9 was it shown to illustrate familial ties.

Worf's emblem (from Season Two onward) signifies that he is a member of the House of Mogh. He is, in fact, one of only two sons of Mogh, and we don't even know he's got a brother until about halfway through DS9. While Klingon familial relations are not discussed in great detail, it seems that you are "X, of the House of Y" while you are unmated. Find a spouse and have kids, and you have created your own house, usually named for the patriarch (in fact a DS9 episode has Quark becoming married in name only to a Klingon woman whose mate has been murdered, and the family becomes known as the "House of Quark"). As such, while bloodlines are important, family names don't seem to carry through several generations unless an ancestor was particularly notable. As Worf never officially forms a family (he does have a son with a half-human mate K'Ehleyr, but never takes the oath of union), for most of the series he remains a part of his late father's house.

By halfway through DS9, Worf's disgraced brother has his memory wiped and is taken in by another house, and Worf is truly the last member of the House of Mogh. In a subsequent episode Worf stands up to Martok, who is captaining a Bird of Prey that has never seen a victory, accusing him of cowardice in the face of glory when he wants to run from a fight against superior numbers. This act, which could easily have gotten Worf killed (and nearly did in the heat of the moment) earns such respect in Martok's eyes that he basically adopts Worf as his own son, bringing him into the House of Martok.

The original baldric seen on Worf in Season One is the exact same sash worn by Kor in "Errand of Mercy" and Kang in "Day of the Dove", according to Memory Alpha. For Season Two, the costume designer experimented with a new design made of metal, and with different badges, and this is the one Worf wore forever after, although the badges on the baldric changed after Worf joined the House of Martok in DS9.

No other Klingon wears a baldric exactly like Worf's, although baldrics are commonly seen. Most other Klingons wear baldrics that appear thicker, but less broad, but still support various emblems and badges.

Out-of-story, this distinction is presumably to keep Worf a distinct character, even on the rare occasions he wears Klingon uniform. In-story, we might presume that even the metal version of Worf's baldric is old-fashioned, which would fit both with the fact that Worf was orphaned young and with the fact that Worf is a bit of a conservative when it comes to his culture (with some notable exceptions).

When Denise Crosby (who played Yar) left the series, the character of Worf was moved into the now empty post of Tactical officer. This required a change of uniform, red to gold. Worf's original baldric, the 1960s one, would have been far less noticable against his new gold uniform, so it was swapped for a silvery one instead. The costumers took the opportunity to redesign the baldric too, but the initial reason was purely for colour.

30
Did Worf's sash color change throughout TNG? When and why?

42
If Worf was raised by humans after the age of 5, why does he "act" so Klingon?
30
What is the Klingon Bloodwine made of?
14
Is there a significance to Klingon brow ridges?
18
Why is Worf always called by one name?
22
What is the spike on Klingon boots for?
0
Why did Worf pass up opportunities to become a key political leader in the Klingon Empire given that honour was so important to him as a Klingon?
3
What really happens when a Klingon dies?
4
What other actors played different characters in TOS and TNG/DS9/Voy?
10
What does Worf say in Klingon in the TNG episode "All Good Things"?