Why is Ocarina of Time the splitting off point for the Zelda timeline?

I have read the other questions and answers related to the Zelda timeline on here. But my question wasn't answered there. A few years ago Nintendo finally released the History of Hyrule book. It, after years of speculation, finally connected all the Zelda timelines.

I'm very confused though. In the Ocarina of Time, two timelines emerge. The first is when the hero is defeated. This timeline makes zero sense to me. Of all the times a player can fail in these timelines, why is it that OoT had the timeline split? Did I miss something here that explains that in OoT another major event happens resulting in Link failing his quest?

I mean I know that with the second timeline two more timelines emerge, one follows the events when Link was returned as a child. The other follows the timeline when Ganon was sealed. But in all the games, it's possible to die. I can't remember an event in OoT where I failed and had to repeat the events over that was any different than another Zelda game.

In the Zelda wiki, this is explained:

The Fallen Hero Timeline[51] is the timeline in which Link, the Hero of Time, despite his best efforts, was defeated by Ganondorf in the final battle.[52] Ganondorf obtained the remaining Triforce pieces from Link and Zelda,[53] and was subsequently sealed within the corrupted Sacred Realm by the seven Sages.[54] This timeline branch contains the events of A Link to the Past, the Oracle series, Link's Awakening, A Link Between Worlds, Tri Force Heroes, The Legend of Zelda, and The Adventure of Link in that order.

After the Hero of Time is defeated at the hands of Ganondorf, the King of Evil extracted the Triforce of Courage from Link and the Triforce of Wisdom from Zelda. Obtaining the true power of the complete Triforce, he is transformed into the Demon King Ganon. In a desperate last resort, the Seven Sages seal Ganon along with the complete Triforce away in the Sacred Realm, which was already transformed into the Dark World as a reflection of Ganondorf's evil heart

But why would this be any different in any other timeline? Ganon or minion of Ganon defeat Link, Ganon gets eternal power, and the rest of the events somehow unfold. I haven't found a single resource explaining why OoT is this breaking off point.

The Split Timeline concept is one that has existed since 2002. Eiji Aonuma first mentioned in an interview that Ocarina of Time had two endings, one where Link returned to his childhood (the one we actually see in-game), and one where he instead disappears forever, leading to the events of Wind Waker. After Wind Waker came out fans hotly debated the idea, as it seemed to make sense to some. The idea gathered steam once again after Twilight Princess was released, as each Ganondorf in all the aforementioned games was contradictory with the established events leading up to the other two. This has given rise to the belief that there are no Dwarf women that there are in fact three different timelines to account for all the inconsistencies across the canon games.

With the release of the Hyrule Historia (see below), the split timeline concept became official canon, branching off of Ocarina of Time in the way Eiji Aonuma mentioned, as well as including the third timeline where the hero is defeated by Ganon.

Essentially, it's Ocarina of Time because Eiji Aonuma said so. As for all the other times when the hero could potentially fail, we are supposed to assume that outside of Ocarina of Time, the hero does not fail.

EDIT: It's probably also worth mentioning that Ocarina of Time was the first game in the series to dabble with Time Travel, so it does kinda make sense that this particular point is the stem from which other timelines branched. 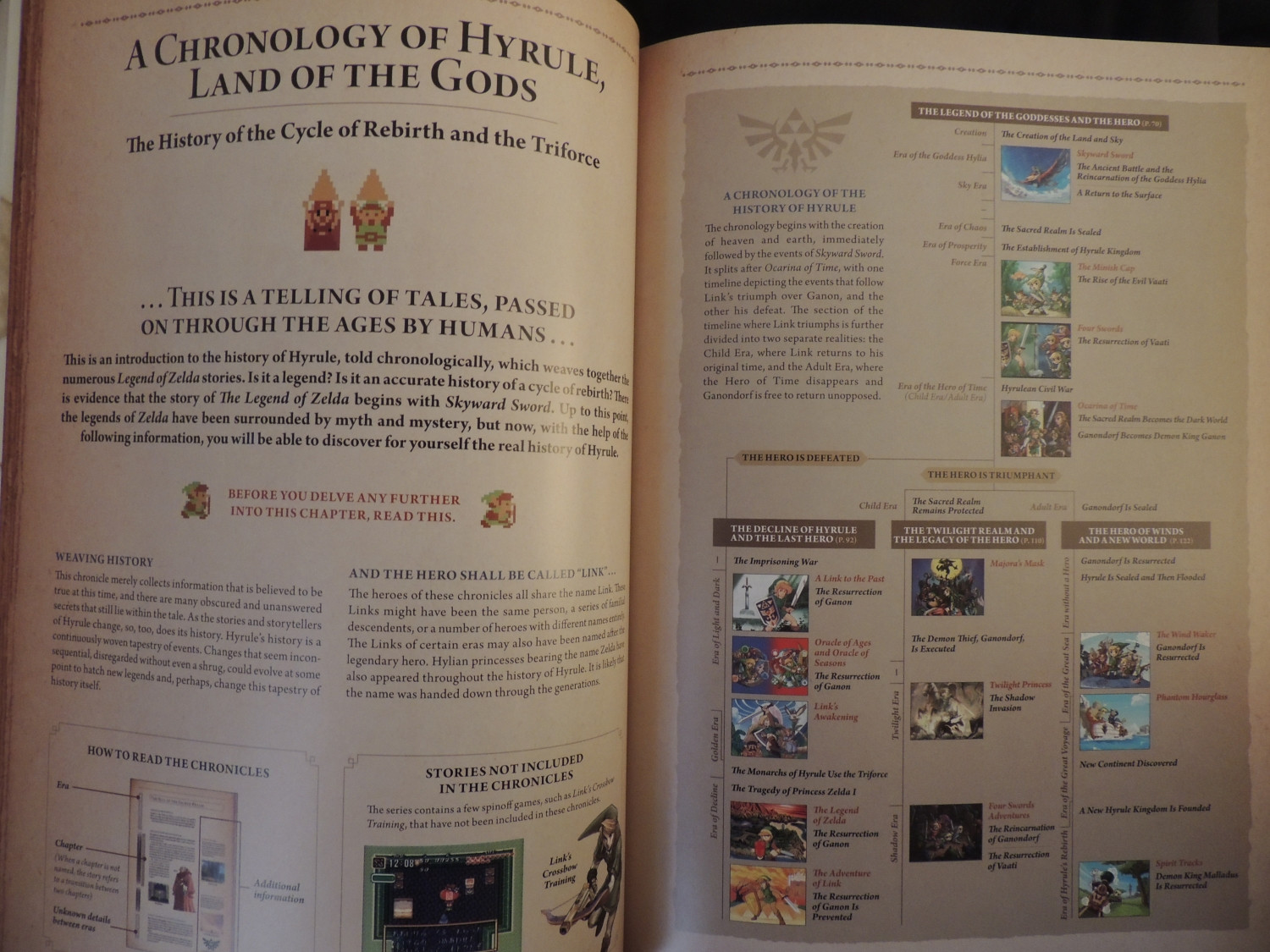 I have the Hyrule Historia, and have played Legend of Zelda since i was 6-all the way thru Twilight Princess. The fans argued over Zelda timelines, and even the "Angry Video Game Nerd" did a whole, "confused over zelda timelines video". Up until that book, there really wasn't a timeline at all. Links and Zeldas and Ganons were different characters that had the same look. Ocarina of Time was special when it was released, it really had a larger following that any of the Zelda titles.

The out-of-universe explanation is, this game was the biggest and most loved by the fans, so they made it the most important part of the new "zelda timeline". The in-universe answer is, because of the "time-travel" being used in Ocarina, allowed the storytellers to make alternate time/dimension paths from the game.

Link wins-good wins, evil loses-you get Majora's Mask, or whatever the other game followed the adult timeline(twilight princess i think). Link loses, land floods-evil wins-new Legend of Zelda era. However, you can argue that because of time travel, the universe changed, and now you have all these continuities.

The series was never meant to be sequels and prequels, just new adventures.

The basic founding principle of time travel (at least for purposes here is): When you travel forward in time, you stay in the same timeline (essentially sleeping and waking up). But when you travel backwards in time, you create a new timeline, leaving the timeline you were originally in.

Throughout Ocarina of Time, there is exactly one time that it is absolutely necessary to travel back in time -- during the Spirit Temple, in order to get the silver gauntlets. It is here that the "adult" timeline is created, and the original "hero is defeated" timeline is abandoned without a Link to save Hyrule.

In other words, Link is never killed, but he is defeated by being outsmarted by Ganondorf, because the only way to win is to abandon that timeline.

Then of course, when you finish the game, Zelda sends you back to your childhood, aka the "child timeline," leaving the "adult timeline" without a Link.

Not the answer you're looking for? Browse other questions tagged timeline plot-device the-legend-of-zelda or ask your own question.

52
What is the timeline for The Lord of the Rings trilogy?
5
How are the pieces of the Triforce distributed?
6
What is the timeline for the Mad Max series?
10
What is the point of sending anything back in time in the Terminator movies?
10
Why hasn't there been a mainstream TV or movie adaptation of The Legend of Zelda?
11
Why does the Star Trek theme appear in the Zelda Symphony?
1
Do the events of Ancient Stone Tablets fit in the Hyrulian timeline?
6
What is the true Legend of Zelda timeline?
6
Why do wizards like Martin keep transporting back to the exact moment in the future from whence they came in Off to be the Wizard?