I read this one probably about 15 years ago, but it was already somewhat older then. I would put it in the 1980s maybe?

There are some details I remember, but the thing I remember most is the meeting at the end, and it's a thing I've wanted to share with people a few times already... if only I could remember the title of the book.

I hope someone can tell me the title of this book, so I can share how cool it is with more people.

This is A Deepness in the Sky by Vernor Vinge (1999), the prequel to A Fire Upon the Deep.

The plot begins with the discovery of an intelligent alien species on a planet orbiting an anomalous star, dubbed OnOff because for 215 of every 250 years it is dormant, releasing almost no energy. During this period, the planet freezes and its fauna go into hibernation. The planet's inhabitants, called "Spiders" by the humans for their resemblance to arachnids, have reached a stage of technological development very similar to that of Earth's humans in the early 20th century, although humans believe that they may once have been capable of space travel. If this is true, then whoever can establish ties with the aliens first could reap unimaginable rewards. 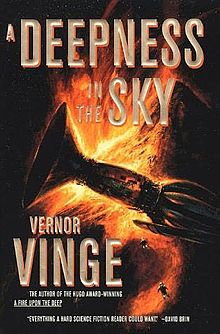 I would like to point out this bears a strong resemblance to the plot of "children of time" by Adrian Tchaikovsky.

12
A book about space traders travelling between stars. Captain was captured and then he managed to free himself using dust-sized maintenance robots
10
Book with legacy programming code on a space ship that the main character hacks to escape
13
Sci-Fi book where spider-like alien lives on the hull of a ship and configures his web to forecast space weather or the future?