I'm looking for a fantasy novel I read in the 90s. Heroine begins the story overweight and has to go on a long quest (don't remember why). Along the way she acquires a group of animal/spirit? sidekicks, including a smartass pig, I think. By the end of her quest she has lost weight - not the main point of the book of course, but it's a detail that sticks out.

I think she developed magical powers during her quest, which she may have been surprised to discover? That's about all I can come up with. Cover was a girl walking in typical fantasy/forest scene with the animals, as I recall. It was a humorous, lighter fantasy. Any ideas?

"I was a huge lump of grease, wobbling from foot to foot like ill-set aspic," confesses Summerdai, the heroine of this improbable charmer with the equally improbable title. Because of her girth, the 17-year-old Summer was passed over to replace her mother as the town prostitute. Equipped with a few supplies, a small dowry and a rather ugly ring left by her mysterious father, she sets out. But the ring is actually a bit of unicorn horn that warns her of danger and, most importantly, allows her to communicate with animals. In quick succession she picks up a ratty dog; a badly used horse; a starved turtle; a wounded pigeon; a man who lost both sight and memory after a bump on the head; and a rather curious little pig with tiny bat wings. The seven of them head south to look for the homes of horse, pigeon and man, during which Summer gains much self-confidence and loses much weight while the small pig/bat gets larger, wiser, more mysterious and more lovable.

When her mother, a medieval village whore, dies, Summer is put out of her home so as not to become a "burden on the parish." With only a few coins for her dowry and a ring as relic of the father she never knew, the girl sets out to make her way in the world. The ring enables her to converse with animals, and as she travels she collects various strays, including a mongrel dog, a lost horse, a broken-winged messenger pigeon, a tortoise, and a strange, winged pig. She also rescues a blind and amnesiac knight. While searching for her charges' homes, Summer names and nurtures them and with them encounters good and bad people and a dangerous ghost. Although their homecomings are not as perfect as she would have liked, most of Summer's friends eventually have them. After the pig's dramatic transformation, Summer is left to face life alone. Yet she has grown from a self-described "fit and ugly" child into a slim, beautiful, and capable woman. 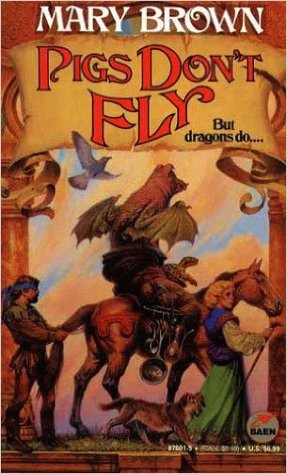 3
Fantasy book about a girl who eats her mother's sin, and then travels with a menagerie of animals
5
A knight with rusty armour and a girl who talks to animals

11
Identify Russian novel about intelligent, talking dolphins, with nuclear test site near by
12
'The talking head' fantasy book with a girl on a quest with a severed head and a sassy crow
7
two part novel, fantasy, tree people, female protagonist. mysterious antagonist who becomes an ally and her romantic potential
6
Fantasy quest novel where the music magic hero doesn't get the girl
5
Fantasy novel about a nobleman on a quest
8
90s (or earlier) sci-fi fantasy book/story with intellectual talking bears who can't stand the smell of humans