Cartoon with immortal man from the ice age

I don't remember the name, only a couple of scenes. There is a group of men in the ice age and they find a meteorite which gives immortality, but only one of them survives. I kind of think that's Lex Luthor's story(that pops up in my head when I think of it). The character is a villain in the modern days when he tells the story.

In the days of prehistory, 50,000 BC, Savage was a caveman named Vandar Adg, leader of the Cro-Magnon Blood Tribe. He was bathed in the radiation of a mysterious meteorite, which gave him incredible intellect and immortality. An observer from the Bear Tribe would later approach that same meteorite and become Savage's eternal nemesis, the Immortal Man, possessing the power to resurrect as a new persona every time he is killed. According to Lex Luthor, there may be evidence to suggest that Savage was the first cannibal on record. Though the Calculator took this to be a joke, Luthor was apparently serious, and Savage has not shown much regard for human life. 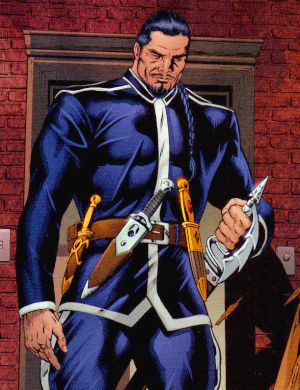