Why doesn't Seven of Nine wear a Starfleet uniform?

After Seven of Nine is de-borg-ified and joins the Voyager crew she wears a skin-tight catsuit, seemingly 24 hours a day. I have always just assumed the reason she didn't get a Starfleet uniform was simply because she wasn't officially a member of Starfleet. But, since a significant number of the Voyager crew was made up of Maquis members who all got Starfleet ranks and uniforms I'm not sure why this wasn't possible for Seven.

I assume the out-of-universe reason is, well... ratings! But has there been any in-universe explanation for Seven not getting a Starfleet uniform or rank?

With the exception of the Maquis this is how Voyager handles all other non-Starfleet crew members such as Neelix and Kes. It's also consistent with how other non-Starfleet crew are handled in other series. The Maquis were a special case. Asking why the Maquis, and others, were given uniforms and ranks sheds light on why Seven, and others, were not.

On the Enterprise D Acting Ensign Wesley Crusher didn't get to wear a uniform. He was only granted this privilege after receiving a field promotion to Ensign. In Ménage à Troi he missed his transport to the Academy and Picard felt he should not wait any longer. (Thanks @Ghanima) 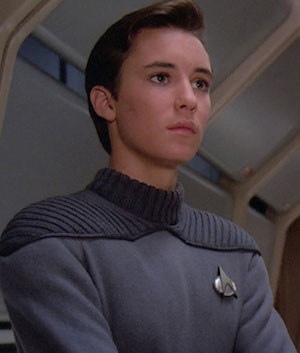 Janeway decided it was paramount that the two crews integrate to better live together on Voyager in the coming years. This was made easier because many were ex-Starfleet (Chakotay) or had some Starfleet training (B'Elanna). Janeway granted them provisional ranks which is why they have different insignia from regular Starfleet. They were given Starfleet uniforms, underwent Starfleet training, and were expected to act as Starfleet crew. 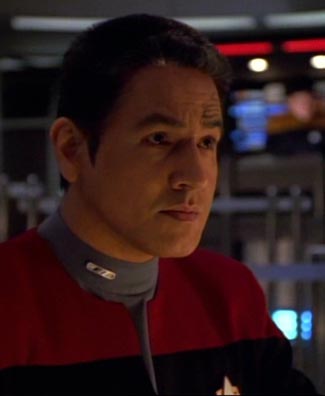 Tom Paris was pointed out by @Durakken in the comments. He's an ex-Starfleet, ex-Maquis criminal invited to Voyager by Janeway as a "Starfleet observer". Which appears to grant him the right to wear a uniform as he's wearing it before they head to the Delta Quadrant, but with no rank insignia. From the start Janeway is trying to bring Tom back into the fold. Upon losing their pilot, she reinstates Tom's former Starfleet rank of Lieutenant Junior Grade. Since he wasn't part of Chakotay's crew, and shows no attachment to the Maquis, he's treated as Starfleet to better integrate him into the crew.

What if Seven had rank? Now she's subordinate to people, people she might feel are inferior, something she does not deal well with. Worse, others would be subordinate to her; she is a terrible leader and would irritate those people. By leaving her outside the rank system Janeway cleverly reduces both problems: Seven only has the authority Janeway grants her, plus Seven's own personality, and anyone who has an issue with Seven can go to a senior officer to work it out.

Seven of Nine is a civilian, rather than a member of Starfleet. Like the other civilian waifs and strays that the ship picks up on their adventures, she gets to wear whatever the heck she likes. Apparently skin-tight catsuits are her preferred outfit.

Where the Maquis are concerned, the situation is slightly different since they were transferring over from one ship (where they already had a rank and role) to another. 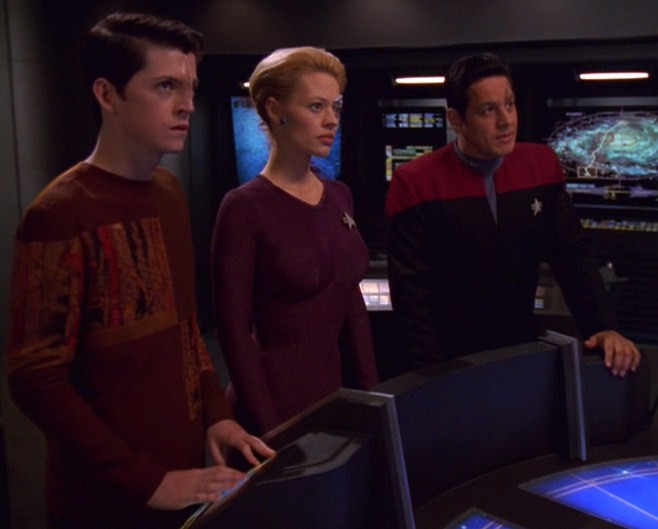 You may wish to note that Tuvok is most decidedly "anti" the idea of non-Starfleet members wearing Starfleet uniforms.

NEELIX: It's not impossible. Maybe. Perhaps not. But we'll find them. We'll need several containers of water to bring for barter. Do these, er, replicators make clothing as well?

NEELIX: Will it make me a uniform like yours?

TUVOK: No, it most certainly will not.

Out-of-Universe: that suit was designed to be sexy. Jeri Ryan, the Seven actor, is a professional model. The suit that Paramount chose for her was a breast-enhancing corset suit to make her "borg perfection" obvious. As explained by director Jesús Salvador Trevino:

Ryan wore a silver jumpsuit for the first few episodes, which director Jesús Salvador Treviño said that during the filming of the episode "Day of Honor" caused problems as "almost any camera angle inevitably winds up emphasising her sexuality."

In-Universe: I think I recall Seven once saying she preferred that suit because it was made out of some sort of advanced fabric that offered superior thermal protection, fabric strength, etc. She liked it because it was more efficient, so to speak, than regular uniforms.

Seven wasn't in starfleet that's a Technical explanation. The Maquis were exception given the size of their ranks, namely that several were former Starfleet officiers themselves so it made sense for Janeways sense of discipline and authority to have them in uniforms. Jeri Ryan was brought in just to attract more male viewers. To do that they gave her a Catwoman style uniform that accentuated her figure. one whose design was simple but also was an homage to her former borg heritage. In particular a segmented armored appearance, No exposure of human flesh except her head and hands, the piping and seams resembling the tubes and nodules in her body.

Seven of Nine’s catsuits are medicinal in function.

The EMH Doctor constructed her catsuit to assist with the regeneration of her necrotizing skin, which was severely damaged by her Borg assimilation.

3
Why didn't Deanna Troi wear a uniform at the start?

23
Was Seven (of Nine) really 24 years old?
44
What does "Seven" and "Nine" mean in "Seven of Nine"?
7
Why did Seven of Nine become human so aggressively?
7
Is Annika Hansen/Seven of Nine German?
25
Did Sisko violate Starfleet regulations or Federation laws when he fired a torpedo to devastate a planet's atmosphere & force it's occupants to flee?
12
How was Seven of Nine the seventh of nine people to be assimilated?
61
Why does Seven of Nine pronounce "Futile" differently than Locutus?
29
Why Does Seven of Nine use her Borg designation?
3
How does the holodeck keep up to date with characters' knowledge?