Trying to find a book I remember reading in the late 90s or early 00s. The protagonist is a young boy and there are three wizards that are all based at separate sections of a city or large town and are unable to leave those locations.

I remember that one of the wizards is a very large brutish looking man and another is an attractive younger man who is good at charming people, including charming the protagonists’ sister.

I also believe at the end there was a rocket launch as well where at least one of the wizards is trapped inside it as it heads towards space. 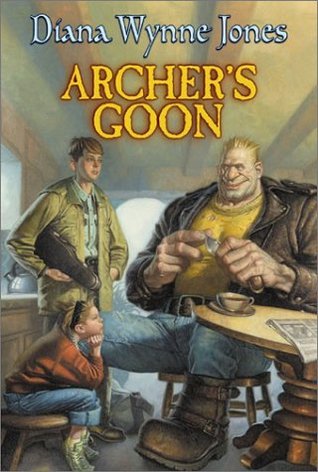 This novel, by Diana Wynne Jones, was published in 1984, so you certainly could have read it in the late 90s or early 2000s. The protagonist is a young boy.

The book features seven siblings, who could accurately be described as wizards, each of whom “farms” an aspect of a small town’s infrastructure.

Quentin, at that point, was yelling, "Face the facts, you stupid woman! This town is run by seven megalomaniac wizards!" He blinked at the sudden light and rounded on the Goon. "You!" he bawled. "I hope you’re taking this down in shorthand. I want Archer to know!"

One of these wizards is giant, the titular Goon (shown on the front of the book).

In the end the wizards are sent away in a spaceship:

Quentin typed a loud full stop and stood up. They all crowded to the window and looked into the yard, where the caretaker still stood, looking suspiciously at the strange moonlit building inside the scaffolding. A wide smile of light appeared in the domed roof, to the right of the great head of Venturus. The smile widened like a moon, to half, then three-quarters, and then to a blaze that struck upward into the blue clouds of the night. There was a gigantic mutter of power, so enormous that the window rattled and everything in the room shook. The girders, and the temple with its opened dome, blurred with it. Their ears went dead. Then, slowly rising from the opened dome, came the spaceship, silvery and stately, up and up, straight as a pencil, into the light of the dome, up out of that light, into the light of the moon, faster and faster and faster. Their eyes followed it up, then up, until its tail spurted white light. A blunt cough of energy came to their dead ears. Against the moon they saw the ship slant sideways and become a shooting star for a second, up and out.

Not the answer you're looking for? Browse other questions tagged story-identification magic childrens-novel or ask your own question.

10
Kids switching between two worlds
6
Help me identify a 90s/00s live action tv show, space travel, golden object, maybe a saturday morning show?
10
Book about children and hot air balloons, possibly steampunk
19
Short story about amnesiac man sent to a prison planet
34
Story Identification: Fantasy world that is “the one true world”
3
Identify an animated childrens TV show from the 1980s about a girl sent to another planet
13
Old sci-fi novella where a space flight (and its astronaut protagonist) are threatened by radical anti-technology activists?
9
Alien Yeti-like Protagonist, 3 stages of life + book split into them, last of his species, Pre-2000s Book
13
Looking for space spy book with female protagonist