Why did Gollum want the Ring so badly when he was still a hobbit?

The Dwarves could not be enslaved using rings of power; nor could the Elves, as the bearers of the Three took them off and hid them when they became aware of Sauron's influence over them. Men, on the other hand, were easily seduced by their power and fell under Sauron's control.

Why did Gollum, who was once a Hobbit called Smeagol, fall so quickly under the influence of the One Ring and the desire for it when Frodo, another of the same race, was able to resist it for so long?

Perhaps because everyone is not the same, even if they are of the same race.

It is true that we are told that Hobbits in general have a greater ability to resist the the temptation of the Ring than other races, but the temptation still exists.

‘You have still got the ring in your pocket,’ said the wizard.

‘Well, so I have!’ cried Bilbo. ‘And my will and all the other documents too. You had better take it and deliver it for me. That will be safest.’

‘No, don’t give the ring to me,’ said Gandalf. ‘Put it on the mantelpiece. It will be safe enough there, till Frodo comes. I shall wait for him.’

Bilbo took out the envelope, but just as he was about to set it by the clock, his hand jerked back, and the packet fell on the floor. Before he could pick it up, the wizard stooped and seized it and set it in its place. A spasm of anger passed swiftly over the hobbit’s face again. Suddenly it gave way to a look of relief and a laugh.

The Lord of the Rings: Book I, Chapter 1 - A Long-Expected Party

We see it most of all in Frodo who succumbs to the Ring at the very end of his quest.

Then Frodo stirred and spoke with a clear voice, indeed with a voice clearer and more powerful than Sam had ever heard him use, and it rose above the throb and turmoil of Mount Doom, ringing in the roof and walls.

The Lord of the Rings: Book VI, Chapter 3 - Mount Doom

Sméagol/Gollum was clearly not as resistant to the Ring as Bilbo and Frodo, although even in his case, after hundreds of years of using the Ring, he managed a retain a small vestige of his Hobbit identity. As Gandalf tells Frodo at Bag End

Even Gollum was not wholly ruined. He had proved tougher than even one of the Wise would have guessed – as a hobbit might. There was a little corner of his mind that was still his own, and light came through it, as through a chink in the dark: light out of the past.

The Lord of the Rings: Book I, Chapter 2 - The Shadow of the Past

Of course without Sméagol/Gollum, the Ring would never have been destroyed, although that was the result of a higher Power.

Sméagol was simply not a good person

His personality is what made him susceptible to the Ring, much like how Boromir succumbed so much faster than Aragorn.

Tolkien discusses this most clearly in Letter 181:

I am afraid, whatever our beliefs, we have to face the fact that there are persons who yield to temptation, reject their chances of nobility or salvation, and appear to be 'damnable'. Their 'damnability' is not measurable in the terms of the macrocosm (where it may work good). But we who are all 'in the same boat' must not usurp the Judge. The domination of the Ring was much too strong for the mean soul of Sméagol.

The Letters of J.R.R. Tolkien 181: To Michael Straight. January/February 1956

And again in Letter 214, when discussing the giving of gifts in Hobbit-culture:

Déagol, evidently a relative (as no doubt all the members of the small community were), had already given his customary present to Sméagol, although they probably set out on their expedition v. early in the morning. Being a mean little soul he grudged it. Sméagol, being meaner and greedier, tried to use the 'birthday' as an excuse for an act of tyranny. 'Because I wants it' was his frank statement of his chief claim. But he also implied that D's gift was a poor and insufficient token: hence D's retort that on the contrary it was more than he could afford.

There is no mention of Sméagol's presents. I imagine that he was an orphan; and do not suppose that he gave any present on his birthday, save (grudgingly) the tribute to his 'grandmother'. Fish probably.

It could be one, or a combination of factors. Firstly, Smeagol was a "Stoor", one of three sub-species of hobbits that had different physical features and possibly temperaments. Stoors tended to live near rivers and such, while Frodo and Bilbo are most likely "Harfoots" which prefer hillsides to live in.There were also "Fallohides" but they don't seem to matter in this example. There is no evidence that "hobbit race" was a factor in determing resistance to the One Ring, but it is something to consider. 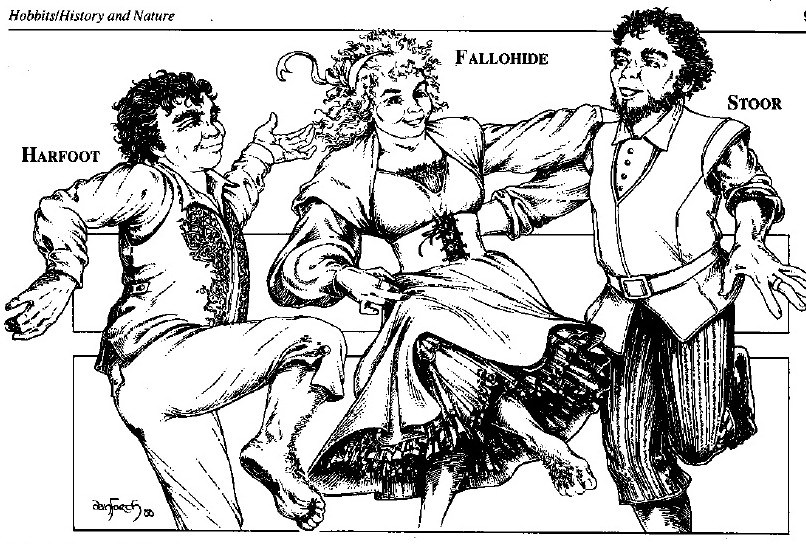 The rings that were given to the Elves, Dwarves and Men were made to be subservient to the One Ring that Sauron wielded and did not share the same attributes. So, as you mentioned, the Elves immediately took theirs off as soon as Sauron put his on, and they hid them.

"However, when Sauron put the Ruling Ring on his finger, the Elves were immediately aware of him and took off their Rings."

The Dwarves did not remove the seven rings they received but were the most physically and mentally resistant to Sauron's corruption and attempt to bend them to his will. Instead they were driven to extreme greed and a hate for anything prevented them from attaining wealth.

"Whereas the Men who owned the nine Rings were corrupted and became the Nazgûl, the Dwarves were unaffected, save by an increase of their goldlust and hatred for anything that stood between them and what they perceived as their treasure." 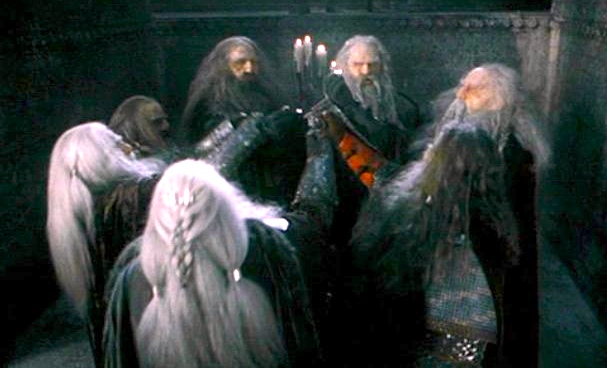 And, of course we know what happened to the nine men that were given rings. Who above all else, desired power. 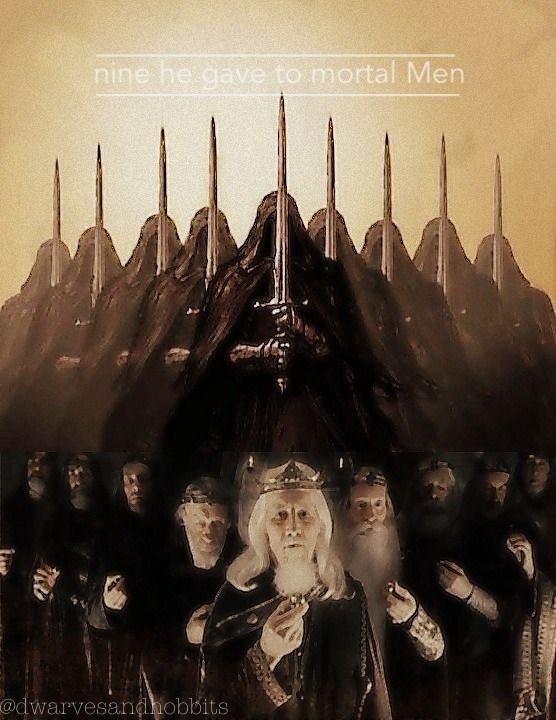 As mentioned earlier, the One Ring had different attributes than the ones that were slaved to it. The One Ring had certain amount of self awareness and self control, as it could change it's size to fall off of the person wearing it, as it did with Isildur and Gollum or use it's own innate power to compel the wearer to a degree in order to benefit it's return to Sauron.

"While separated from Sauron, the Ring would strive to return to him, both by impelling its bearer to yield to Sauron or his servants, or by abandoning its possessor at key moments"

The largest factors in why Gollum "freaked out" over the ring seems to be his own inner nature as well as the means by which the wearer obtains it. That would mean that Smeagol already had greed, jealously and the willingness to commit murder in his character, the Ring simply amplified it greatly, and his act of killing his cousin Deagol to get it, increased the effect of corruption even more, whereas Bilbo simply found it and was not willing to kill even someone like Gollum in the process of escaping. 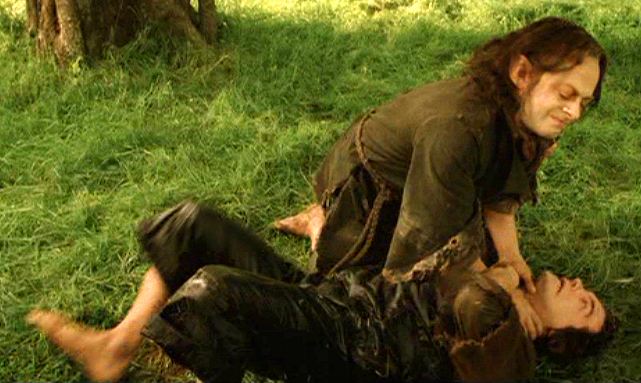 It's worth noting that even though Deagol only possessed the Ring for a brief few minutes, it seemed to have already been affecting him before he actually found it, thus leading him to refuse to give it to Smeagol as a birthday gift which led to his death and Smeagol's banishment, which allowed the Ring to corrupt him almost entirely over the course of centuries without interference.

I hoped this was a viable answer for you. If you would like to do some more digging in to the matter I will post the link to the LOTR wiki where I found my information. Enjoy and watch out for farmer Maggot!

Not the answer you're looking for? Browse other questions tagged the-lord-of-the-rings tolkiens-legendarium the-hobbit hobbits or ask your own question.

26
How and why did the Elves sense Sauron's treachery when he put on the One Ring?
17
Why did the all member of the middle earth council agree with Frodo as ring-bearer?
3
The effect of the Hobbits holding the One Ring?
24
Why was the One Ring such a problem?
46
Why was Sméagol affected by the ring so fast, while both Frodo and Sam could handle it without immediately trying to choke each other?
40
Did J.R.R. Tolkien ever write a deeper connection between The Hobbit & The Lord of the Rings: The Fellowship of the Ring?
13
How did Gollum physically change after finding the Ring?
56
Do we know what the 20 Rings of Power look like?