Is there a story behind Darth Maul's double bladed lightsaber?

One of the most famous lightsabers is Darth Maul's double bladed lightaber.

But is there an in-universe backstory of how/why he has one?

When he battles Obi-Wan & Qui-Gon Jinn in Episode I, his lightsaber proved to be very useful, which also makes me wonder why more people don't have one too.

I'd love to know if there are any backstories which let us know where this iconic lightsaber came from in the film.

Both canon and Legends are acceptable.

This is covered in Star Wars Tales #10. Maul is off killing Jedi survivors when he comes across a weapons master who bests him with a simple wooden staff. Recognising that he needs an "edge", he comes up with his funky two-bladed lightsaber. 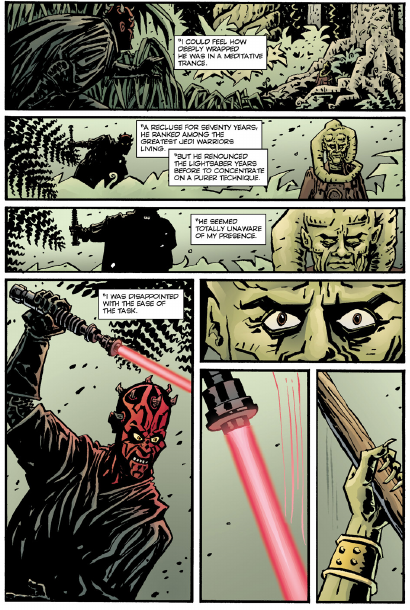 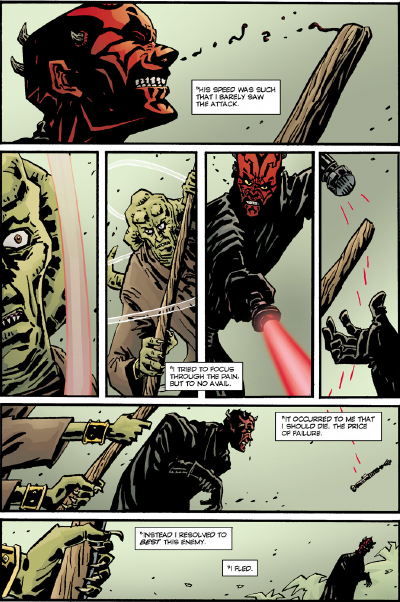 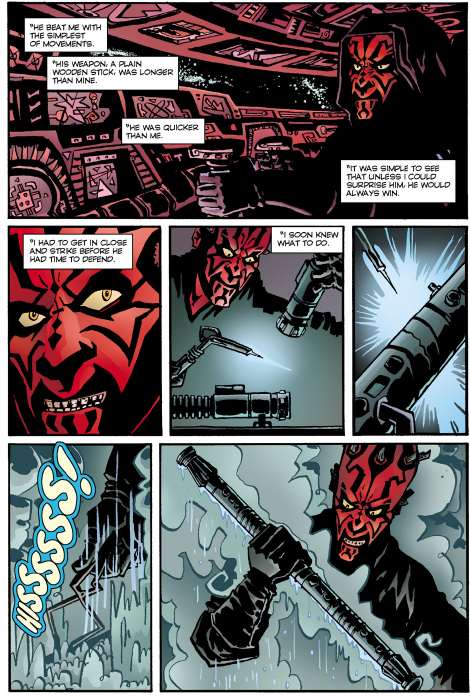 The process of making his lightsaber is also described in Darth Maul: Shadow Hunter.

The intensity of his connection to the Force brought back a memory: another day of intense focus of his power. The day he had constructed his lightsaber. Maul was not wont to revisit his past, unless doing so somehow served his master, but the satisfaction of the creation, the perfection of focus, and the highly charged connection to the Force that had wrought his weapon stood out now in his memory.

The specialized furnace, which he had created from plans taken from his master’s Sith Holocron, had radiated an intense heat as it shaped the synthetic crystals needed for his lightsaber. But rather than leaving the kiln chamber and allowing them to form on their own, he had remained near the device, concentrating on the metamorphosing gems, using the Force to purify and refine the lattice of the molecular matrices.

Most Jedi used natural crystals in their lightsabers; Adegan crystals were the gems of choice. Most of the other components of a lightsaber were easily obtained—power cells, field energizers, stabilizing rings, flux apertures—but not the crystals themselves. They had to be mined in the Adega system, deep within the Outer Rim Territories. The difficulty of using natural materials meant that the alignment process could take a long time—and the calibration had to be perfect, because mismatched crystals could destroy not only the lightsaber, but its creator.

Finding and aligning the crystals was a Jedi test, but it was not the way of the Sith. The dark masters of the Force preferred to create their own synthetic crystals, to match the harmonics in the searing heat of a crucible and thus take their creation of the weapon to a deeper level.

Maul had sat by the furnace, focusing his hatred of the Jedi to a fiery peak and expanding his control of the Force, which he used to manipulate the molecular structures of the four gems required for his double-bladed weapon. The choice to make two blades instead of one had been an easy one. Only an expert would even think of trying to handle a double-bladed weapon, and he would be no less than an expert. The glory of the Sith required it, as did his master.

Not even the compressed ferrocrete walls of the pressurized chamber could entirely contain the intense temperature required to form the crystals. Hour after hour had passed, the searing heat washing over the apprentice. But his control had not wavered; the pain had not swayed his focus. Layer after countless layer of the crystals had been laid down, aligned, and perfected. It had taken days, days without food or water or sleep, but eventually he had sensed their readiness. Then he had deactivated the furnace and cracked it open. There, sitting in the formation crucibles, had been his four perfect crystals.

Not the answer you're looking for? Browse other questions tagged star-wars star-wars-legends lightsaber the-phantom-menace darth-maul or ask your own question.

45
Why did Qui-Gon advance against Darth Maul without Obi-Wan?
32
Shouldn't Darth Maul's double bladed lightsaber have broken?
8
What started the smoke or fire behind Darth Maul?
11
How could Darth Maul's survival go unnoticed?
18
Where are Obi-Wan Kenobi's and Qui-gon Jinn's Lightsabers?
24
Has Qui-Gon ever visibly appeared as a Force ghost?
2
Why didn't Obi-Wan incapacitate Darth Maul?