For a project I'm working on, I came across Yankee in Oz (1972) by Ruth Plumly Thompson. In the story is a giant named Badmannah the Terrible. He, according to the Oz Wikia, "has a magic fishnet, with which he fishes for treasure and captives from the lands below," including the missing princess from Whackajammy. In the end, Badmannah was sunk in the Nonestic Ocean.

Now, a year prior, there was a book, The Knight of Swords (1971) by Michael Moorcock. It marked the first book in a trilogy about his fantasy hero, Corum. (The series was completed in 1972.) Throughout these books, a wading giant, later revealed to be Rhynn, brother of Kwll, and the donor of Corum's fantastic optical prosthesis, who wades through the ocean with a fishnet, searching for the thing he lost. He even, at one time, catches Jhary-a-Conel in his net.

While Moorcock published first, Thompson apparently completed her book in 1959. Are these similarities purely superficial, or is it likely that one was inspired by the other? Or quite possibly some proto-giant-with-a-fishnet?

The primordial giant with a fishnet is Loki (who may be a god or a giant or both, depending upon how one counts). In fact, Loki is supposed to have invented nets while he was on the run from the Aesir. He used the net he created to get food from the waters, but when the Aesir were nearly upon him, he turned into a salmon and tried to hide from them. Although he tried to destroy his net, the Aesir managed to use Loki's own invention to capture him and imprison him until Ragnarok. 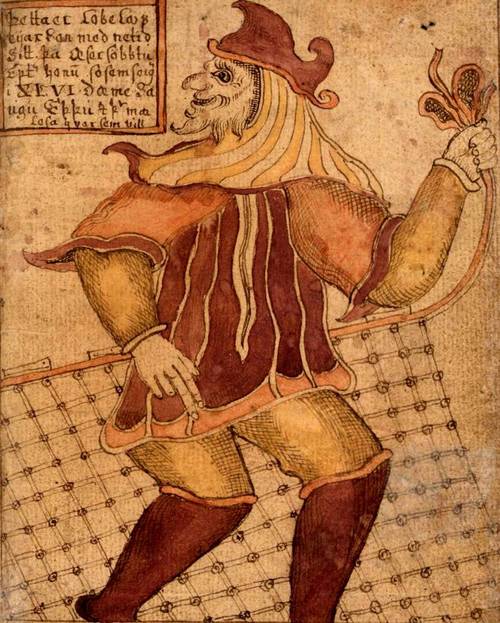 This whole story may have been a relatively late addition to Norse mythology, having originated from the similarity between Loki's name and a word for a knot or tangle. However, the story is definitely well over a millennium older than either the Oz or Corum tales, either of which might have been influenced by it.

Not the answer you're looking for? Browse other questions tagged character-similarity the-wizard-of-oz chronicles-of-corum or ask your own question.

35
Did the witches know that the Wizard of Oz was a fraud?
4
Oz and Wicked continuity?
9
How did Dorothy and the Scarecrow decide on which way to go?
5
In “The Wonderful Wizard of Oz,” why does the Good Witch of the North advise Dorothy to go to the Emerald City?
5
How is the Corum universe related to the Elric universe?
2
What sword is fluctuating next to Arioch in the first volume of the Corum Chronicles?