I read sci-fi story while back. The story was more focused on the philosophical part of the problem. The story was set on future earth. An US military was using operators usually 4-6 people who would connect to something like 'Matrix'. Their consciousness would join and they could collectively control unit of robot soldiers on the other part of the world.

The technology was working in such a way that the link was bidirectional so the operators would feel pain to some extent. IIRC there was an incident where the operator suffered substantial psychical trauma after being attacked by flamethrower or Molotov's cocktail.

One other detail I remember is that because the people would share the consciousness the mood of one of the group would affect the others as well. To such extent that even male operators would feel symptoms such as PMS if the female operator was on hers period.

I believe this is Forever Peace, by Joe Haldeman. 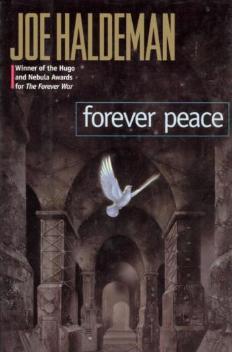 Though its title is similar to The Forever War and both novels deal with soldiers in the future, Forever Peace is not a direct sequel, and takes place on a different future of Earth much closer to the present day.

Using remotely controlled robots called "soldierboys" (which are nearly invincible), the Alliance military fights third world guerrillas in an endless series of economy-driven wars. As only first world nations possess the nanoforge technology that can produce anything from basic materials, conflict is asymmetric.

The novel is told partly in first-person narration by the main character, Julian Class, and partly by an anonymous third-person narrator, who is able to comment on aspects of Julian's personality and background.

The main protagonist, Julian Class, is a physicist and a mechanic who operates a soldierboy. Thanks to electronic "jacks" implanted in their skulls, mechanics are remotely linked to the machinery as well as to each other, being able to experience battle through the machines and read the thoughts of other mechanics who are simultaneously jacked in.

Obviously pretty close, and there was a specific moment where the PMS affecting male operators was mentioned in the text:

The women in a platoon synchronize periods pretty quickly, and the men are of course affected. It's a problem with the thirty-day rotation cycle: the first half of last year I came home every month crabby with PMS, proof that the brain is mightier than the gland.

There's also a scene where because the robots they're linked to are destroyed by fire, they suffer extreme pain:

I fell asleep and instantly awoke to a blaze of pain. My sensors brought in nothing but blinding light, a roar of white noise, searing heat—and complete isolation! All of my platoon was disconnected or destroyed.

I knew it wasn't real; knew I was safe in a cage in Portobello. But it still hurt like a third-degree burn over every square centimeter of naked flesh, eyeballs fried in their sockets, one dying inhalation of molten lead, enema of same: complete feedback overload.

It seemed to last for a long time—long enough for me to think this was actually it; the enemy had cracked Portobello or nuked it, and it was actually me dying, not my machine. Actually, we were switched off after 3.03 seconds. It would have been quicker, but the mechanic in Delta platoon who was our horizontal liaison—our link to the company commander if I died—was disoriented by the sudden intensity of it, even secondhand.

Later satellite analysis showed two aircraft catapulted from five kilometers away. They were stealthed and, with no propellant, left no heat signature. One pilot ejected just before the plane hit the schoolhouse. The other plane was either automatically guided or its pilot came in with it—kamikaze or ejection failure.

Both planes were full of incendiaries. About one hundredth of a second after Candi sensed something was wrong, all our soldierboys were trying to cope with a flood of molten metal.