Were the horses in The Final Frontier an Earth breed?

Horses are a big feature in Star Trek V: The Final Frontier. The opening shot is Sybok on his steed: 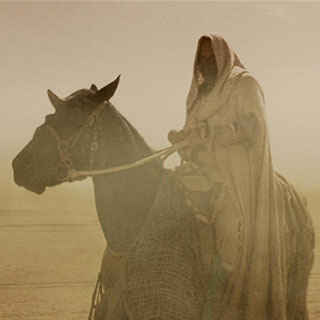 Out-of-universe, I always chalked up the horse scenes in this film to William Shatner, given his love of horses and his direction of the film.

But I've always wondered, in-universe, where these horses came from.

Are these animals native to Nimbus III, are they from Earth (the planet was home to a joint colony of the Federation, Romulans, and Klingons), or are they from elsewhere?

Interestingly, the script doesn't call for horses at all, but rather for "odd creatures" with "twisted rhino horns":

The fact that they didn't go with these particular creatures just confuses the issue. Is there any clarification about the origin of these horse-like animals anywhere?

The animals are called horses, even though they clearly are not:

A rider emerged from the storm. He rode astride a native creature that Federation settlers jokingly referred to as a “horse.” For some reason the term had caught on, though the beast resembled no Earth animal J’Onn had ever seen. Granted, it was a quadruped, but larger and shaggier, with a twisted horn jutting from its snout.

Rather, they are known as tsemus:

It was a fire, and the dark hulks were tsemus, beasts of burden the human settlers on Nimbus indiscriminately referred to as horses.

That said, the creatures apparently are not Earth horses even in the film. Though they may not have “twisted rhino horns,” there’s clearly a horn sticking out of the head of the picture of the horse in the question. 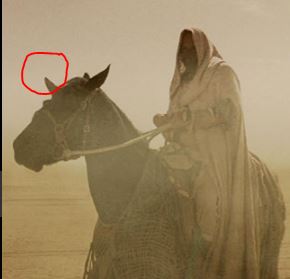 Other sources also show the horn clearly. For example, the comic adapatation: 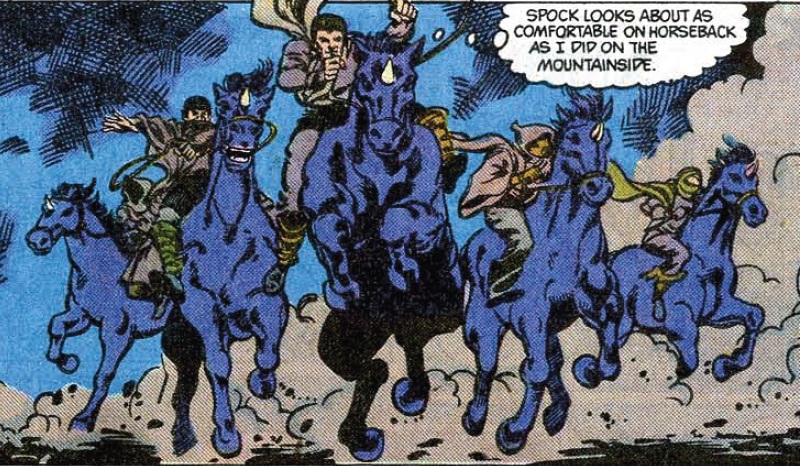 The film's official novelisation refers to them as "Tsemus" and specifically states that they're an alien animal that the locals refer to as horses, despite them not actually being horses.

It was a fire, and the dark hulks were tsemus, beasts of burden the human settlers on Nimbus indiscriminately referred to as horses. Less than a kilometer away from the dune was a small oasis, a pathetic spring where a group of six armed soldiers had gathered to warm themselves by a campfire and let their tsemus drink. If they had seen or heard signs of the Galileo's arrival, they seemed unconcerned by it.

Spock was first to make it through the gunfire and stampeding tsemus to the saloon. He dismounted with silent thanks to the creature for its assistance. The direct physical contact with it had allowed for a small degree of mental contact as well. The tsemus were benevolent beings, of limited intelligence but nonetheless highly adaptable, as their survival despite Nimbus's severe climactic changes proved. Spock had found the mental experience most pleasant; and, in time, the physical experience had grown less painful, for the more he concentrated on his mount's thoughts (or, more accurately, its sensations) the easier it became to attune his body to the animal's movements.

There's no indication whether they're an Earth/Alien horse crossbreed or something else but the clear implication is that they're entirely alien.

Interestingly, in both the script and the film's comic novelisation, they're just referred to as "horses" which strongly implies that the whole 'tsemu' thing is an invention of the novelisation's author J.M. Dillard. 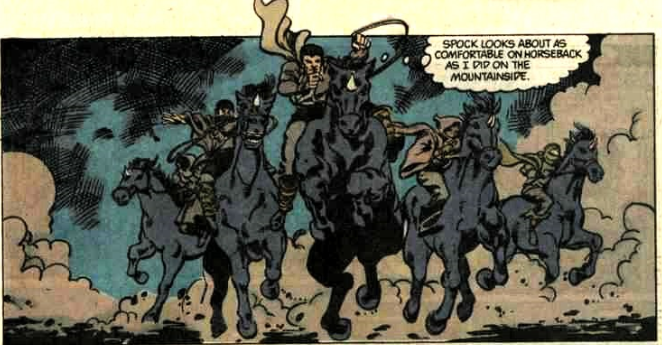 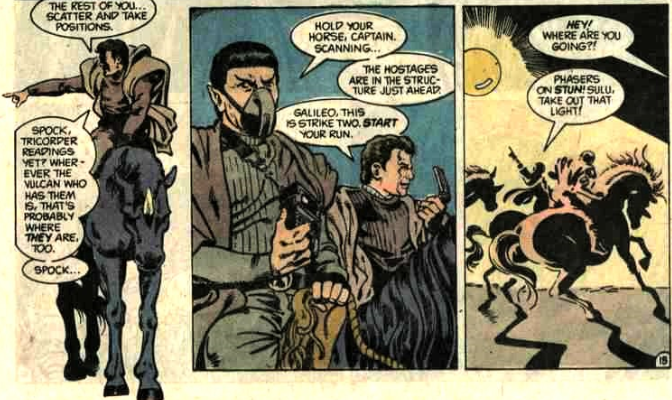 In the novelisation, these animals are referred to as tsemus, an alien race, and they are only "indiscriminately" labelled as horses by Earthling settlers:

It was a fire, and the dark hulks were tsemus, beasts of burden the human settlers on Nimbus indiscriminately referred to as horses.