Is Daredevil's suit made of vibranium?

This is a question specifically about the Marvel Cinematic Universe version of Daredevil (in other words, Netflix's recent Daredevil television series).

For most of Season 1, Matt Murdock does not have a "suit" in the superhero sense. About three quarters of the way through the season, he becomes impressed by the resistance of Wilson Fisk's business suit to laceration. It is remarked that the material is unusual and probably especially expensive. 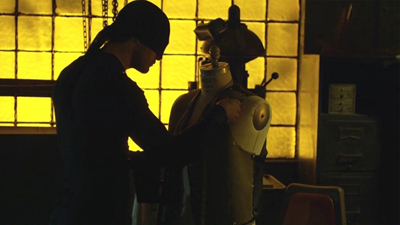 Murdock subsequently arranges for his eventual Daredevil suit to be fashioned from the same material, by going straight to the source (a metalsmith who had been coerced to work for Fisk).

Is this material vibranium?

The series begins by making decidely veiled references to other previous cinematic events, including referring to Loki's invasion of Earth as only "the incident". Consistent with this, they may not wish to use the word "vibranium" explicitly.

Also, according to this answer, vibranium actually first appeared in a Daredevil comic, although I don't know the context of the appearance.

Is there any evidence that this material in the television series is spun from some form of vibranium? Is there a statement otherwise?

Possibly, but most likely not

There isn't much exact information about what the suit is comprised of. This may be due to intentional vagueness from the writers.

What we know for sure is that it contains alloys and carbon nanotube based allows:

... After Daredevil's first meeting with Punisher, Potter increased the durability of the suit by adding extra plating and reinforcing the red regions of the suit. Per his recommendation, Potter also incorporated a new carbon nanotube-based alloy which he said was "near indestructible" into a new helmet that included red lenses in the eye holes. He also added advanced alloy gauntlets to the suit's gloves as a bonus. ...
-Daredevil's Suit

The reasons why I personally believe that it can't be Vibranium, is that Vibranium in the MCU is extremely rare (at least prior to the events of Age of Ultron), with Captain America's shield being the only bit of Vibranium that the US has access to.

Kevlar
I'd say most likely that the suit contains some combination of kevlar and light-weight alloys.

You see, kevlar can protect against bullet damage, as well as cuts and abrasions:

Kevlar is used to manufacture gloves, sleeves, jackets, chaps and other articles of clothing designed to protect users from cuts, abrasions and heat. Kevlar-based protective gear is often considerably lighter and thinner than equivalent gear made of more traditional materials.
- https://en.wikipedia.org/wiki/Kevlar#Personal_protection

Line-X Spray
Line-X spray is commonly used in truck bed application to strengthen and protect the surface. The company which developed it has recently created a new application of the material called Paxcon which can be used in body armour.

Here's a cool video demonstration of the capabilities of the spray.

Melvin Potter is a mechanic. As such, he could have knowledge of this awesome stuff and may have indeed applied it to parts of the suit (especially the helmet, shin pads and greaves).

Handwavium
This is the MCU after all, and it wouldn't be complete without a bit of "handwaving". We can chalk up this mysterious substance to some sort of unexplained material. It could also mean that the alloys and alloy composites are in fact Vibranium based, just not confirmed to be.

In a recent interview, Ryan Meinerding (one of the costume concept designers of Daredevil (2015)) commented on on the subject, saying:

“The tone that was really communicated was the sense of realism that they were going for”
...
"When we do these designs, there’s a concept of grounded and a concept of reality."
...
"The overall layout of that costume is really that it’s meant to look like a Kevlar vest with stuff underneath it. That’s what we were going for."
-http://marvel.com/news/tv/24632/ryan_meinerding_details_the_design_of_daredevils_costume

This aim for realism makes me believe that perhaps Vibranium is just that much too fantastical for this gritty, down-to-earth story.

Additionally, note the reference to "kevlar" armour which solidifies my thinking that the suit probably had some kevlar elements to it.

There is no evidence that the suit includes vibranium, either in the transcripts or in any interviews I could find.

The episode "Dogs to a Gunfight" describes Daredevil's second mask as being comprised of "near indestructible" "fortified, carbon tube" while his gloves are "reinforced alloy."

Signs point to the suit not being vibranium, or at least not pure vibranium, as parts of the suit won't even consistently stand up to a knife.

Melvin: Black parts will give the most protection. Red might deflect a knife, depending on the angle... might not. ("Daredevil")

His original mask also broke from a single gunshot. 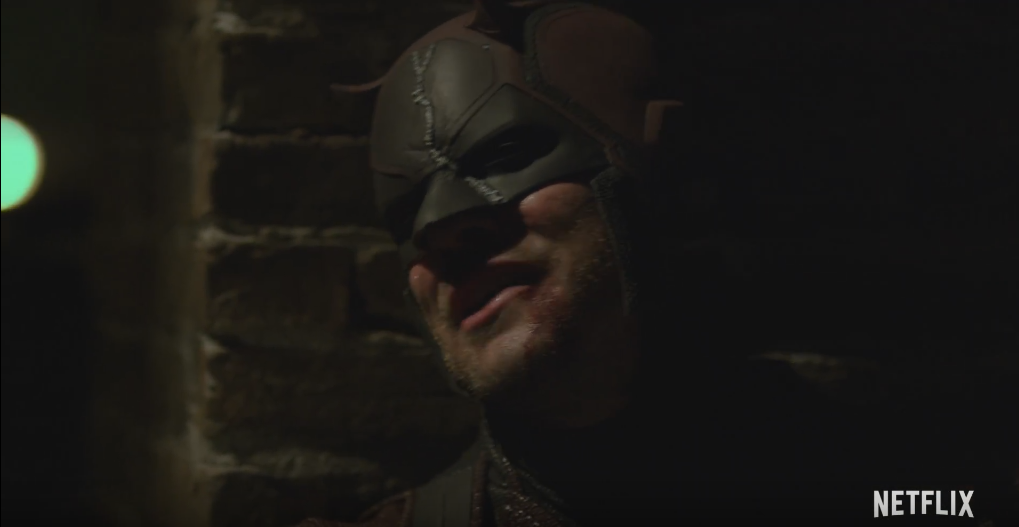 Compare that with Captain America's shield and Black Panther's suit, which both hold up to multiple barrages of bullets.

Absolutely not. Vibranium's rarity makes it one of the hardest to find substances on Earth. The only known source of the material can be found in the African nation of Wakanda. Even as connected as the Kingpin was, it is unlikely he could manage to afford even a sliver of this rare material.

"Vibranium. It's stronger than steel and a third of the weight. It's completely vibration absorbent."

"How come it's not standard issue?"

"That's the rarest metal on Earth. What you're holding there, that's all we've got."

The only other supplies of vibranium were found in the body of Ultron and that vibranium was stolen from Wakanda. The only other active amounts of Vibranium is in the armored habit of the Black Panther.

What is vibranium and where can it be found?

Daredevil's suit was made from the same material Melvin Potter used to line both Wilson Fisk and Leland Owlsley's suits. The material was light yet at the same time, it was extremely durable. It was unlike anything Murdock had ever felt. Drawing from Murdock's devout Catholicism, the suit is designed to resemble the Devil, complete with horns on the cowl helmet. This was accentuated by the red color scheme, and contributed to the name given to him by the media: Daredevil.

The suit provided Daredevil with enhanced protection, however the original prototype was incomplete and not properly refined. The red areas on the suit could only protect against knives depending on the angle, while the black parts which were bullet resistant and would offer significantly more protection. After Daredevil's first meeting with Punisher, Potter increased the durability of the suit by adding extra plating and reinforcing the red regions of the suit. Per his recommendation, Potter also incorporated a new carbon nanotube-based alloy which he said was "near indestructible" into a new helmet that included red lenses in the eye holes. He also added advanced alloy gauntlets to the suit's gloves as a bonus.

--Reference: A Penny and a Dime

Not the answer you're looking for? Browse other questions tagged marvel-cinematic-universe marvel costume daredevil daredevil-2015 or ask your own question.

14
Why didn't Iron Man make Vibranium armor in Iron Man 2?
5
What, exactly, is Vibranium able or not able to absorb?

8
When did Daredevil's weapon first appear with a rope attached?
22
Do Daredevil's enemies know that he's blind?
6
In the comics, who made Daredevil's costume?
22
Can a cage made out of Vibranium contain The Hulk?
7
How many languages can Kingpin speak?
7
What are the limitations of Daredevil's hearing?
3
Was the Black Panther's Suit ever made from Adamantium?
4
Does Wilson Fisk discover that Matt Murdock is Daredevil?
2
Do we know anything about DareDevil's (Matt Murdock's) Mother from the comics continuity?