In the Halo series the Master Chief (Spartan John-117) wears a suit of armor called the MJOLNIR Powered Assault Armor. 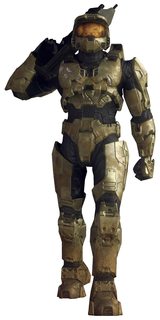 I'm wondering whether this use of "MJOLNIR" has anything to do with the Mjölnir from Norse mythology or Thor?

It's likely named after Thor's hammer from Norse mythology. Nothing I can find implies it has any relation to the Marvel weapon specifically.

Halo has a history of similarly-named armor components.

Many of the names of armor in the series appear to be inspired by mythology and history.

As I recall correctly it's "explained" in Fall of Reach. The similarity with Thor's hammer is that only "worthy" can use it. (as in Norse mythology depicted in various cartoons and Marvel universe) When normal marine was test driving this armor he was crushed since his reflexes weren't fast enough.

Spartans came through whole augmentation process where their physical strength, brain processing power etc. were increased way over normal human capabilities and they had genetic predisposition to begin with.

Well that is until Spartan III-IV programs where they tried to make whole process less expensive. Therefore armor had to be adapted to be used by less augmented personnel.

Not the answer you're looking for? Browse other questions tagged halo mjolnir armor or ask your own question.

17
In Halo Reach, why is the AI carried in a large canister?
39
Can Magneto Lift Thor's Hammer?
26
How much would Thor's hammer (Mjolnir) weigh?
27
Why isn't the Master Chief a Commissioned Officer?
9
Master Chief John-117 real face?
15
How could Thor's hammer Mjölnir be forged in the heart of a dying star?
4
How did Regret get the coordinates of Earth?
32
What is the prop for Thor's hammer (Mjölnir) made of?