Does the existence of Prawn weapons suggest other hostile races in the District 9 universe?

It seems established that the Prawns are a hive-mind type of society so I would think they would be cohesive enough that there wouldn't be many internal conflicts, at least those that would require violence to resolve. I would also presume that if the hive-mind structure were to fracture as it did in the movie you wouldn't want there to be such destructive weaponry around to be used by individuals.

Given that the weapons were pretty darn destructive why else would you bring them on a interstellar voyage? Wouldn't that be a bit like Earth astronauts bringing a grenade launcher to the Moon?

If you're heading into a situation where you know there are no hostile forces--as we did with going to the Moon--then why bother taking weapons? All they would do is add mass to the launch vehicle and be a useless encumbrance for the astronauts.

The situations where you take weapons are two in number:

Unfortunately, the possible existence of these situations means that we don't know if there are other alien races out there in the District 9 universe. The existence of such races was unimportant to the plot, therefore the matter is not even discussed.

According to an interview that the film's director (Neil Blomkamp) did for Io9.com, there are definitely other life-forms out there, aside than the Prawns and the humans.

The other thing is that the ship was meant to clip together with other ships. So there's, like, vast amounts of resources that they're bringing to the parent planet. And the ship, when the army generals or the queen of that particular ship died off by some sort of virus or bacteria that they picked up on some other planet, that killed them off.

And it didn't effect these sort of resilient, hardy sort of drone workers. Then the technology is usually the thing that they relied on to save them, but in this case it sort of screwed them because it brought them to a planet that kind of treated them pretty badly, but it was the ship that realized that, unless it gets to a life sustaining planet everything is going to die, which is a cool idea. So the ship just autopilots to the closest one in the Goldilocks band, and it's our planet and then pulls up and hits the brakes.

District 9's Director Tells Us All About His Alien Back Story

Obviously bacteria don't need to be kept at bay with guns and mech-suits, but the simple fact that single-celled organisms can be found in our galaxy would strongly imply that there are other higher lifeforms as well.

As regards the possibility that the weapons are for use against their own kind, that seems extremely unlikely.

The hive mind [concept] is the most important thing to me, because I love the idea of a civilization that can build all of that technology and then, at the same time, just have a massive population that was just drones that needed direction, and were absolutely incapable of building that stuff on their own. I found that to be a really interesting concept. Also, it sort of explains why they don't turn on the humans. Individually, they may be feeling oppressed, but they don't have it together enough to form a resistance and back one another. So I found that really interesting.

Wouldn't that be a bit like Earth astronauts bringing a grenade launcher to the Moon?

It could be like Europeans bringing guns and cannon to the New World.

Our trip to the Moon was just to see if we could do it. It pushed the edges of our technology. Everything had to be stripped down to make it happen. And we knew there were no little green men there (or Soviets).

In contrast the ship in District 9 is enormous. City sized. And it can float indifferently for months. Its hull is so thick it takes considerable effort to cut through. They've obviously been a space-faring civilization some time. They're not too concerned about weight. It's not a lunar lander getting three people to the Moon and back, it's a Galleon taking a small city.

What was the purpose of that ship? We don't know. But if it had the intent of exploring or gathering resources, those weapons could be for the inhabitants. We're the natives who get gunned down. 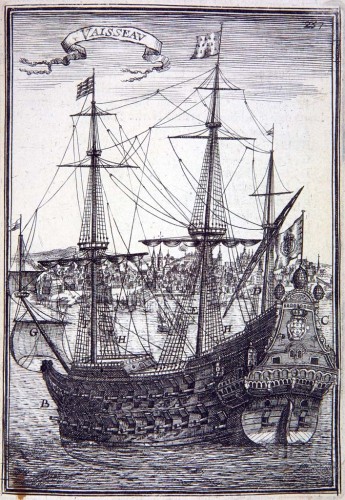 Having a hive-mind structure does not imply that the weapons are for outsiders. Odds are, there is more than one hive - and take it from bees and ants, different hives generally don't 'play nice' with each other.

Is there a species on Earth that does not fight with other members/groups of it's own kind? Can a species evolve and totally dominate a world without developing weapons of some sort?

The answers to both of these are no, therefor, the Prawn having weapons do not imply there are other hostile species out there.

You miss a very simple possibility that the thing you think as a weapon can actually be a tool. Primarily used for cleaning debris, or welding, or protecting from predators, or whatever. But used as a weapon when such a need arises.

Not the answer you're looking for? Browse other questions tagged district-9 or ask your own question.